Lawsuit over stolen Nazi art at U of Oklahoma suspended 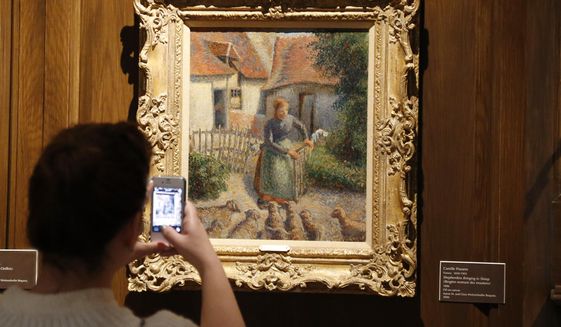 In a Saturday, Feb. 8, 2014 file photo, a visitor to the Fred Jones Jr. Museum of Art at the University of Oklahoma in Norman, Okla., takes a photograph of a piece called “Shepherdess Bringing in Sheep” by Pissarro

OKLAHOMA CITY (AP) - A federal judge has suspended activity in a lawsuit that challenges the ownership of a painting that hangs at a University of Oklahoma art gallery as negotiations continue with a French woman who claims the artwork was stolen from her family by Nazis during World War II.

U.S. District Judge Joe Heaton signed an order to suspend activity in the lawsuit until Feb. 28 as negotiations continue between attorneys for Leone Meyer and the university over the painting “Shepherdess Bringing in Sheep” by the impressionist master Camille Pissarro.

Meyer filed the lawsuit in May 2013, saying the painting belonged to her adopted father. Meyer, a Jewish woman who lives in Paris, wrote an open letter in 2014 that said her biological family was killed at Auschwitz between 1942 and 1944. Meyer survived the Holocaust and was adopted by Raoul and Yvonne Meyer in 1946.

Raoul Meyer fled to the United States, but returned to Europe in 1945 and found the painting missing. He discovered it in Geneva six years later - a year after the statute of limitations ran out. He claimed subsequent owners made a weak attempt to prove the Pissarro wasn’t on a list of known Nazi-looted works. A Swiss court found that post-war owners had done due diligence and rejected Meyer’s claim.

Oklahoma oil tycoon Aaron Weitzenhoffer and his wife, Clara, purchased the painting from a New York gallery in 1956. The painting was among more than 30 works totaling $50 million that were donated to the university when Clara Weitzenhoffer died in 2000. It now hangs in the Fred Jones Jr. Museum of Art.

Leone Meyer’s lawsuit claims that “minimal ownership information” was provided for the 1886 painting and other artwork in the collection and has demanded the painting be returned to her.

An attorney for Meyer, Pierre Ciric, released a joint statement Thursday that states negotiations between Meyer, the university and the OU Foundation are ongoing and the parties “are diligently working to reach a final agreement.”

Heaton’s order, signed Tuesday, says the parties told the court they’ve reached a compromise and settlement. But state Rep. Paul Wesselhoft, who has closely monitored Meyer’s lawsuit and urged the university to return the artwork, said suggestions that a settlement has been reached are premature.

“All that has occurred is a cooling-off period,” said Wesselhoft, R-Moore. “Leone Meyer wants the painting. That’s the real story.”

Wesselhoft also said he has made a formal request for information and documents involving all 30 of the paintings the university received from the Weitzenhoffer family and believes there are other paintings in the collection that were looted by the Nazis. He said he has not yet received the documents.