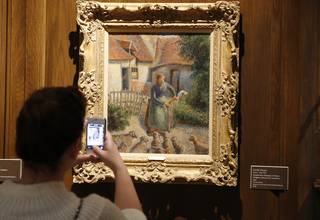 "Shepherdess Bringing In Sheep" is shown.

NORMAN — The University of Oklahoma has reached a settlement in a lawsuit filed by a French woman over a painting that was stolen from her family by German troops during World War II, university officials confirmed Wednesday.

The painting, Camille Pisarro's "Shepherdess Bringing In Sheep," was a part of a large collection owned by Jewish businessman Raoul Meyer before the war.

Nazi soldiers confiscated the collection during the German occupation of Paris as a part of a looting campaign that reached across Europe.

After it was stolen, the painting changed hands several times. It came to OU in 2000 as a part of a collection bequeathed to the Fred Jones Jr. Museum of Art by Oklahoma oilman Aaron Weitzenhoffer and his wife, Clara.

University officials had refused to return the work, citing a previous court ruling in Switzerland denying the family's claim to the painting based on timing.

University officials didn't release the terms of the settlement with Leone Meyer.

"The parties have agreed to a mutually agreeable resolution in principle and are working through the details of formalizing that agreement," said Anil Gollahalli, the university's general counsel.