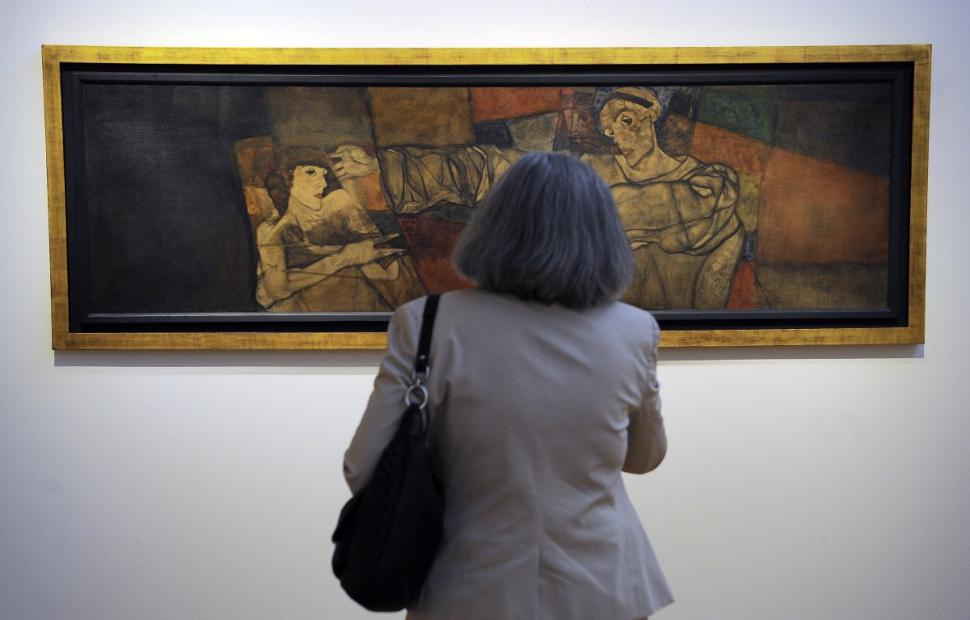 A woman views "Selbstbildnis mit Modell (Fragment)" by Egon Schiele. A Manhattan judge blocked the sale and transport of two of the Austrian Expressionist painter's works on Tuesday.

The heirs of a Jewish Cabaret performer who was murdered by the Nazis in 1941 persuaded a Manhattan judge Tuesday to block the sale and transport of two Egon Schiele paintings that were part of his extensive collection.

Manhattan Supreme Court Justice Charles Ramos ordered London-based art dealer Richard Nagy and the Conservancy that runs the Park Avenue Armory's annual art show to freeze the disposal of the watercolors — worth an estimated $5 million — until he can hold a hearing December 1.

The paintings — Woman in a Black Pinafore and Woman Hiding Her Face — were part of Fritz Grunbaum's extensive collection of more than 400 masterpieces the Nazis forced his wife, Elisabeth, to relinquish after they put Grunbaum in the Dachau concentration camp where he died in 1941.

Raymond Dowd, the attorney for the heirs — Milos Vavra, who lives in the Czech Republic, and the estate of Leon Fischer — said the whereabouts of most of Grunbaum's collection is unknown.

Dowd said he became aware of these two pieces Friday when journalist Richard D'Arcy called and asked what if anything he was going to do about the Schieles that Nagy had for sale at the annual Armory show.

It is unclear if anyone bought the watercolors, but Dowd said that's immaterial because under New York State Law no one can own stolen property.

Three years ago, the federal courts ruled that a wealthy Massachusetts businessman David Bakalar could keep his piece of the Grunbaum collection, another Schiele painting called Seated Woman with Bent Left Leg, because the heirs had not asserted a claim to it in a timely fashion.

The federal courts also accepted Bakalar's contention that the heirs didn't own the painting because it was sold legally by Grunbaum's sister in law in 1956.

The heirs dispute that the 1956 sale was legal but Dowd said the federal courts ruled as they did because the lower court judge refused to consider evidence discovered late in the case that would have undermined the credibilty of that sale.

"Bakalar got away with it. No one else will," he declared.

Bakalar who bought his Schiele in 1964 at the Galerie St. Etienne said he did not know it was stolen. After winning in federal court, he sold it for $1.3 million at a Sotheby's auction.

Dowd said that in contrast, Nagy, a seasoned art dealer with an international reputation, must have known that these watercolors have been on a stolen art registry for years.

"Nagy brought them into this jurisdiction to sell them. What's that saying? There's a sucker born every minute," Dowd said.

Nagy, reached in London by email, said "There is no question that I support the return of property looted by Nazis to their rightful owners but this is not the case here. I'm extremely sympathetic to such claims as my own family had to leave Hungary under duress after the Anschluss" (Germany's invasion of Austria).

Nagy said both watercolors involved in new lawsuit were sold by a member of the Grunbaum family in 1956 and they have the same background as Bakalar's. He said the federal court denied the heirs claims "stating that there was no evidence of Nazi looting" and two independent boards in Vienna have agreed.

Dowd insisted that under state law, the 1956 sale "means nothing as a matter of law" because Grunberg's sister in law was never declared a lawful heir by the courts the way his clients have.

"It's a fairy tale that is irrelevent to title," he said.