Interview with Simon Goodman, author of "The Orpheus Clock" 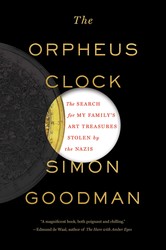 [Editor's note] Simon Goodman is the grandson of Friedrich Gutmann, a Dutch Jewish banker whose possessions were plundered during the German occupation of the Netherlands and who paid with his life at the hands of the Gestapo. One of the paintings that Gutmann lost was a pastel by Edgar Degas entitled "Landscape with Smokestacks", that ended up in the collection of an American billionaire, Daniel Searle, a trustee of the Art Institute of Chicago. The case became known as Goodman v. Searle and led to a bruising David against Goliath-style battle between the Goodman heirs and an extremely wealthy man who refused to return the pastel, on principle, arguing his good faith in the acquisition of the looted work. The outcome was mixed as the case led to a settlement.  Twenty years later, Simon Goodman has penned “The Orpheus Clock” which recounts his family’s history and the ordeals it faced during the tumultuous 20th century and its endless quest for justice to recover lost works and objects of art and, with them, a piece of the family's plundered memory and spirit.

Mr.Goodman, when did you decide you wanted to write "The Orpheus Clock"? Was there a particular moment or event that triggered your need to tell the story?

I had the idea to write “The Orpheus Clock” almost 20 years ago. While researching two Degas paintings from my grandfather’s collection, I was angry to discover that he was not mentioned in any of the catalogues raisonné about that artist. I was shocked by how quickly my family had gone from fame and fortune to almost complete obscurity. It became my mission to make sure my family would not be forgotten. It was also my process for getting to know the family I never knew.

Why did you decide to use the Orpheus Clock as the title of the book? Would you say there is an underlying metaphorical relation between the ancient Greek myth and some of the events in the book?

The Orpheus Clock, I feel, symbolizes obviously the passage of time and in this case the reversal or return of my family’s fortunes. After decades of suffering the clock’s hand points towards happier times. Meanwhile the Orpheus legend symbolizes the will power to make great change. The Clock also represents my largely successful attempt to reunite the remaining dispersed fragments of my family, many of whom had never known each other before. Finally the restitution of this remarkable clock is also significant because it was my first direct restitution from Germany.

Most of us find it hard to even imagine what it would mean to be left with tens of boxes containing documents of the kind you were presented with. Do you ever wonder what would have happened if you and your brother hadn’t decided to go through them?

I don’t think there was ever any doubt that my brother and I would continue our father’s work once we understood the enormous extent of what had been taken from our family. That being said, I have often wondered how different my life (and many others) would have been had my father’s girl-friend decided not to pack up all his old papers – it would have been so easy for somebody to throw them all away assuming they were obsolete and worthless.

Almost half of the book is dedicated to telling the story of your ancestors. When did you start tracing your family’s genealogy? Was it a parallel process to locating the art works or did you treat it as a separate process? Could you walk us through it?

Tracing my family’s genealogy and tracking our lost artworks went hand-in-hand. The works of art gave me an insight into the characters of those that had collected and cherished them. Also by following my grandfather and great-grandfather’s footsteps, as the amassed their collections, I gained invaluable insight into their habits and lifestyles. Growing up after the war with very little family, it was important to me to be able to establish my roots. Now that I have managed to document hundreds of relatives and ancestors I have discovered a huge family that I am justly proud of.

The first part of the book does a brilliant job in painting a vivid picture of events at the turn of the century. There are parts in the book that make reference to what Eugen, Louise, Fritz and others might have felt or said in certain occasions. Were these excerpts derived from actual letters and/or written records or are they to be attributed to your attempt to give them a voice and bring them closer to the reader?

Virtually all our family records and letters disappeared during the war. Most of my recreation of the Gutmann family is based on what I was able to glean from my father’s notes and his sister’s recollections. A small amount of detail has also been preserved by the historical society of the Dresdner Bank. The rest I have extrapolated from snippets about the family that I found in old books and periodicals.

If you had to single out one of the moments in your mission to recover your family’s treasure as the most emotionally charged, which one would you pick? Why?

There have been many highly emotional events concerning the recovery of my family’s treasures.

However one of the highlights of my saga is definitely when the Franz von Stuck “Sensuality” was taken down off the wall by the man who had had it for 40 years. He then helped me carry it to my car, where we put it carefully in the trunk. This was perhaps the closest I have got to a perfect restitution: no money changed hands and the legal work was kept to a minimum. After much conversation and deliberation the collector just decided to do the right thing. This was an intensely gratifying moment. The return of the Baldung-Grien comes fairly close behind, whereas all the other cases have involved considerable blood, sweat and tears.

In 1991, your father wrote a small memoir summarizing his attempts to recover the artworks and is quoted as saying “Only the lawyers made money”. Almost a quarter of a century later, is that an accurate statement?

My experience with lawyers has been fairly similar to that of my father’s, which is why I have trained myself to do my own research and then approach the appropriate collector, museum or government directly. In fact my approach as the representative of the family and the direct heir has stood me in good stead. The possessor of the artwork is less likely to engage expensive lawyers of their own; in contrast a fruitful dialogue is often the result.

As you now know first hand from your experience, provenance research is an extensive, long and expensive process. What changes would you make to the‘mechanisms’ currently in place that would encourage more claimants to come forward and help correct the elitist approach that is often taken when deciding whether a claim is worth taking forward or not?

I think the reason provenance research has become such a rarified pursuit is largely due to the fact that over the centuries the recording of provenance history has been handled in a very cavalier manner. It has long suited the art business to hide behind these opaque practices. There is no great mystery to art provenance if the data is readily available. Obviously we would all benefit from a national database to which all accredited museums would contribute – galleries too ideally.

Every item has its own history, therefore every case should be treated as an independent search in its own right. But when the number of objects is in the hundreds, time is not on our side and it is impossible to deal with each object individually. Has a systematic approach to methodology come out as a result of your many years of researching many objects at once? Do you have any advice for new researchers who find it overwhelming to research multiple objects at the same time?

My approach to prioritizing my claims is fairly simple. At any given time at the top of the stack is the one I think is the most likely to succeed. The next priority involves the greatest number of pieces that are still in one specific place. Concerning research, I find it very helpful to stay focused on one specific school or medium i.e. Dutch 17th genre painters or Italian baroque bronzes. Collectors and galleries also operate within similar parameters. Invariably when looking for a particular Northern European Mannerist silver sculpture I find several mentions of others that were in my family’s collection.

As you state at the end of the book, your search is still ongoing. Could you share with the readers what your next quest is?
Several cases have been on the back burner while I finished my book. Coming to the fore now is a claim for eleven rare, and very beautiful, Italian hand-painted majolica dishes, which I found a couple of years ago in a Dutch museum. I also expect an imminent settlement for some Renaissance jewelry. Meanwhile I am negotiating with a Bavarian museum for the return of several antiques, mostly Meissen, including some of my grandmother’s coffee cups.

All photos, except the reproduction of "Landscape with Smokestacks" and the book cover were supplied by Simon Goodman.