The Staatsgalerie Stuttgart has agreed to return Bildnis Pfalzgraf Johann III (Portrait of Elector-Palatine Johann III), ca. 1526, by Hans Wertinger to the heirs of the art dealers Saemy Rosenberg and Isaak Rosenbaum, the owners of the art dealer firm I. Rosenbaum in Frankfurt. Rosenbaum and Rosenberg sold the Wertinger in 1936, but the proceeds were paid into a Nazi-blocked account. The work eventually ended up with collector Heinrich Scheufelen in 1948. 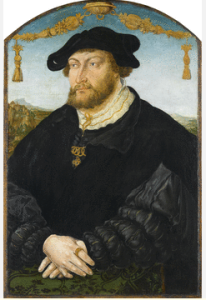 If readers hear some familiarity in the references to Saemy Rosenberg and Isaak Rosenbaum, it is because I. Rosenbaum was one of the three art dealers that formed the consortium that was forced to sell the Guelph Treasure, or Welfenschatz, in 1935 to agents of the Nazi Prussian state. I represent the heirs of those consortium members (and of Zacharias Hackenbroch) in the lawsuit currently pending in Washington, DC. We will not restate all the critical points of that claim here, but for present purposes it is important to note that one of the primary excuses the Federal Republic of Germany and the Stiftung Preussischer Kulturbesitz (SPK) have given for refusing to restitute the Welfenschatz is the claim that the consortium was fairly paid. Yet as the case we filed points out, even the proceeds that Germany claims were a fair price (which they were not) were also paid into an account blocked by the government, and from which confiscatory “flight taxes” and other pretextual fees for the “privilege” of leaving the country alive were taken.

Thus, the decision by the Ministry of Culture of Baden-Württemberg (one of the 16 German states or Länder that make up the Federal Republic) is all the more notable. Critically, in assessing the claim to the Wertinger, state secretary Jürgen Walter said in a statement on Monday, “We stand by our historic responsibility to identify and return cultural goods expropriated from those persecuted by the Nazi regime.” Baden Württemberg had little trouble acknowledging the Wertinger “sale” for what it is: a coerced transaction of looted art. That fact—and that fact alone—mandated restitution. This is a refreshing act of moral clarity.  The press release by the ministry cites the importance of the 1998 Washington Principles on Nazi-Looted Art, and the so-called 1999 “Joint Declaration” by the Federal Republic of Germany and its 16 Länder that committed to the restitution of looted art.

These two claims form an important, but still frustrating, contrast. Dealers like Rosenberg and Rosenbaum were not free to make arms’-length transactions in 1935 or 1936, or to use the proceeds freely. Unequivocal acceptance of that basic fact advances the historic understanding of looted art. That was just as true as when they sold their interest in the Welfenschatz, yet the national government persists in claiming that sale was fair.  Sometimes, these questions are hard only when people make them hard.

Journalist Stefan Koldehoff (author of the excellent Die Bilder Sind Unter Uns, or The Pictures Are Under Us) noted this important parallel in a radio interview this week on Deutschlandfunk. His interview, which is in German, draws this very connection between the Wertinger claim and the Welfenschatz case involving the very same victims of Nazi terror.

Would that the national government and the SPK would follow the laudable example set by one of the German states. And hearty congratulations to the heirs for their persistence in obtaining recognition for the suffering of their ancestors.