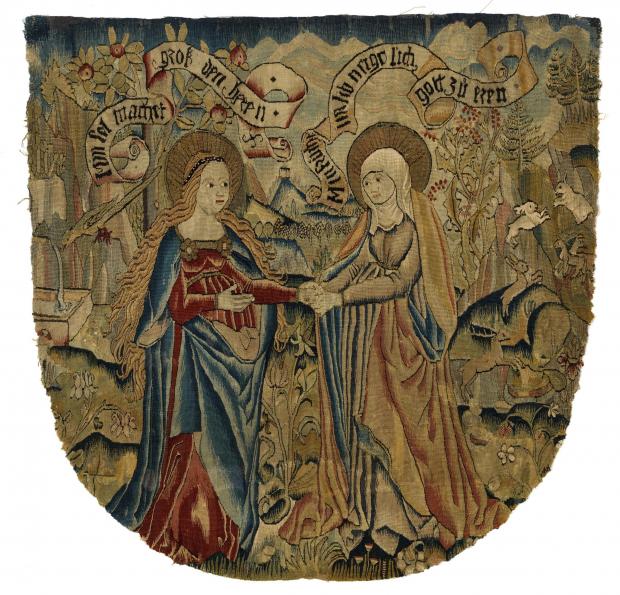 The Visitation in the Burrell Collection

Glasgow is to pay compensation that could run into tens of thousands of pounds to the heirs of a Jewish woman after a tapestry in the Burrell Collection was found to have been plundered by the Nazis.

The fragment in the world-famous art collection was part of a Nazi 'forced sale' from a Jewish widow in the 1930s.

Sir William Burrell bought The Visitation in August 1938 for £315, a year after it was sold from the estate of a German Jewish lady named Emma Budge, in February 1937.

The heirs of Mrs Budge, represented by lawyers in Berlin and New York, have lodged a successful claim that the tapestry, which depicts the pregnant Virgin Mary and Saint Elizabeth, is "spoliated" or plundered, art.

The Burrell Collection bequest does not allow for the disposal – or sale - of any objects from the collection, a stricture which the heirs to the tapestry acknowledge.

So the city council is set to enter into negotiations with the heirs over compensation, which could run into a five-figure sum.

The tapestry, which was part of the world-famous collection of art and objects given in a deed of gift to Glasgow by Burrell, is a fragment, cut from a larger tapestry and fashioned into the shape of an ecclesiastical hood.

Last year the Spoliation Advisory Panel of the Department of Culture, Media and Sport considered the case and recommended that Glasgow seek terms with the heirs of Mrs Budge, who in turn will relinquish their claim on the art.

The Spoliation Advisory Panel is a group of experts which consider claims from anyone, or their heirs, who lost possession of a cultural object during the Nazi era and is now in a UK national collection or another UK museum or gallery.

The history of the tapestry provides another glimpse into the state-sanctioned anti-Semitic laws of the Nazi regime.

Following Mrs Budge's death on 14th February, 1937, her family was forced to sell her art collection.

None of the proceeds of the sales went to the heirs of Mrs Budge.

The tapestry was sold for 2500 Reichsmarks, to a buyer called Rosenbaum.

However, the tapestry swiftly moved into the hands of a dealer called John Hunt, who sold it to Sir William Burrell.

It noted that Hunt has been at the centre of allegations that he had links to art and antique dealers linked to the Nazi regime.

It added: "The Panel is not however persuaded that those allegations, even if capable of substantiation, cast any material reflection on the conduct of the city.”

The panel recommended an "ex gratia payment" reflecting the current market value, in lieu of the tapestry itself, which will remain in the museum's collection.

However, when the tapestry is exhibited, it will be now accompanied by a note "acknowledging the circumstances in which the estate was deprived of the object and the terms on which the claim was resolved."

Two valuations have been acquired for the tapestry fragment from leading auction houses Sotheby’s and Christies which "will form the basis of discussions over the value of the work."

A spokesman for Glasgow Life, said: "Glasgow has led the way in attempting to identify objects that may have been acquired as a result of Nazi atrocities and has been posting details of objects where provenance may not be certain on the UK Government’s website since 1998.

"In cases where a claim is proven, the city has always been resolute that it has a moral duty to put right the mistakes of the past, no matter how long the passage of time."

The Council’s Executive Committee will meet on 13 August to consider approval of the recommendations.

Once approved, discussions will be held with representatives of the Budge estate over the ex-gratia payment.