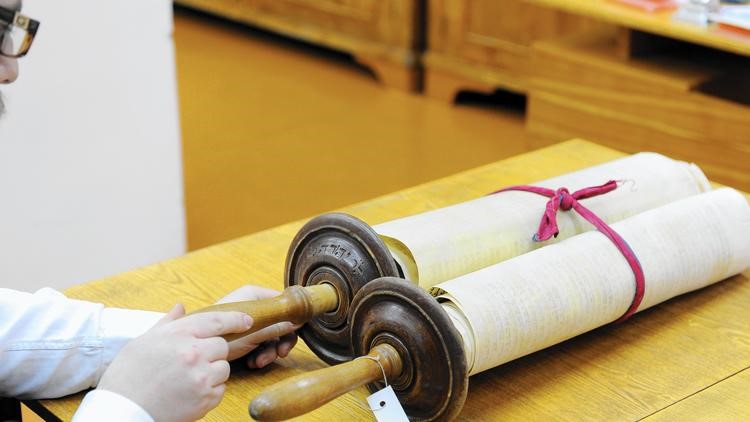 This Torah scroll — the property of Yehudah Lieb HaCohen, a Hungarian Jew — was stolen by the Nazis and recently found in Russia. The Jewish Heritage Foundation Inc. of Florida plans to return stolen Judaica to its rightful owners. (Submitted photo)

The Jewish Heritage Foundation Inc. of Florida has published indisputable photographic evidence of Torah scrolls and other Judaica stolen from Hungarian Jewish families by the Nazis during World War II and recently found in Russia.

The proof is on the foundation website, http://www.thejewishheritagefoundation.com, which was scheduled to become live on Monday, June 15.

The Boca Raton-based foundation was started by Boca resident and foundation president Sibyl Silver — a member of both Boca Raton Synagogue and the Chabad of Boca Raton — and her late husband, Robert.

The Silvers first became involved in the quest to find missing Eastern European Torahs and Judaica three years ago and all the incredible advances with this project in this past year have been dedicated in Robert's loving memory.

The purpose of this project is to restore and reunite these artifacts of Hungarian Jewry, as well as those of other Eastern European countries, with the proper owners: the families and heirs they rightfully belong to.

The foundation is now focused on locating Judaica — and other religious objects and communal assets — stolen by the Nazis and remaining in museums, libraries and other storage facilities in former Eastern European countries.

The foundation works with the support and cooperation of Jewish communities and organizations in Russia, Europe, Israel and the United States.

A report by the World Claims Conference and the World Jewish Restitution Organizations claimed there could be up to 47 countries where Judaica is currently stashed that were either stolen during WWII or abandoned. Russia is listed as where a "substantial amount" of this Judaica is located.

The foundation so far is presenting materials found in the Lenin Regional University Scientific Library in Nizhny Novgorod, a Russian city about 250 miles east of Moscow. One-hundred thirteen Torahs were located, documented and awaiting restoration.

To date, 10 Torahs have been taken from this library in Nizhny Novgorod and are being stored in the Chabad in that small town awaiting restoration, while two of the Holocaust Torahs were transported all the way to Moscow to await restoration in the Chabad of Moscow.

Said foundation vice president and spokesperson Peter Pike (Silver's cousin): "Because of our discovery in Russia, the foundation has issued demand letters to government officials in Belarus, Poland and Romania calling for full and unfettered access to institutions so independent inspectors/historians can review and report on how much of stolen Judaica is still in their possession.

"We also asked for a commitment to meet before August 30 to discuss our claims and the implementation of a mechanism by which the stolen property can be restored to its rightful owners or successors."

Added foundation counsel Ken McCallion: "I have had a longstanding concern that no effective action has yet been taken to recover the thousands of pieces of Judaica, religious and cultural property that was plundered from Jewish communities throughout Eastern Europe. Now something is finally being done to correct this terrible injustice."

"It is a privilege for me to serve as special counsel to the foundation to start to take action against Belarus, Poland and Romania to get those countries to permit inspections and research at their museums, libraries, universities and archives. I have no doubt that within five years — before the 75th anniversary of the end of World War II — Torahs, manuscripts, Judaica, and religious and cultural property, will be returned to their rightful owners."

In its letters to officials of Belarus, Poland and Romania, the foundation demanded the return of stolen Judaica, stating: "These stolen objects represent the heart and soul of our communities. They represent the attempt to destroy our people and our culture. The Nazis successfully destroyed millions of people. They were not successful in destroying Judaism, the Jewish Nation and the Jewish way of life. What is in your state institutions is our life and our heritage. It is time for it to be given back."

The foundation is committed to the following simple but all-important principles:

•Stolen Judaica should be returned to the Jewish people.

•Stolen Judaica should be used to help rebuild the communities from which it was stolen.

•Stolen Judaica should be used to help keep alive and honor the memories of the martyrs of the Holocaust through education and museum projects worldwide.

The foundation believes that tens of thousands of Torahs and megillahs were stolen, as well as millions of books, manuscripts and religious texts. Also stolen were curtains, embroideries, paintings, artwork and items adorning synagogues, as well as silver breastplates, crowns, kiddish cups, candelabras and pointers. For a listing of the last-known locations of these items, see the foundation's website.

Officials of the foundation will be in Europe from June 30 to July 8, when they are planning meetings to move the project along.

Donations also are being solicited to restore the 70 to 80 percent of the first 113 Torahs that can be restored and returned to synagogue use (in accordance with the mitzvah — commandment — to "write a Torah.")

If you'd like more information about the foundation's project to locate, recover, restore and return stolen Eastern European Judaica to their rightful owners (or to use in synagogues, schools, community centers and museums), emailinfo@thejewishheritagefoundation.com or call 561-571-0622.