A federal judge in Los Angeles has declined to order the return of an Impressionist painting to the relatives of a Jewish woman who was forced to sell the work for $360 to a Nazi art appraiser in 1939. 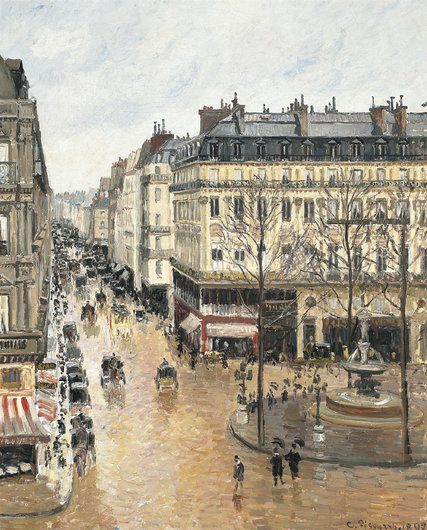 The ruling came after a decade-long dispute over ownership of the 1897 canvas, “Rue Saint-Honoré, Après-midi, Effet de Pluie,” a Paris street scene by Pissarro, which is in the Thyssen-Bornemisza Museum in Madrid. The judge, John F. Walter of United States District Court, rejected a claim by relatives of the woman, Lilly Cassirer, who sued the museum and Spain seeking to have the painting turned over to them or to be awarded damages.

Judge Walter ruled that Spanish law applied in the case, and that the law did not require the painting’s return. However, at the end of his opinion, he issued an appeal to the museum to effectively do the right thing before resorting to any more court action. Judge Walter called on it to “pause, reflect and consider” working out a resolution in light of Spain’s acceptance of international agreements regarding returning Nazi-looted art and its “commitment to achieve ‘just and fair solutions’ for victims of Nazi persecution.”

In response, Evelio Acevedo Carrero, the managing director of the foundation that runs the museum, said that the museum might consider “some form of moral recognition” of the circumstances in which Ms. Cassirer lost the painting. For instance, he said, the museum could hang a plaque next to the painting explaining that it had been part of the Nazi expropriation of art.

The initial claim was filed by Claude Cassirer, Ms. Cassirer’s heir, who lived in La Mesa, Calif. After his death in 2010, two other family members, David and Ava Cassirer, took over as plaintiffs, alongside the United Jewish Federation of San Diego County.

Mr. Acevedo of the museum foundation said that it was “very satisfying” to have an American court recognize the ownership rights of a Spanish museum. “The judge makes it very clear that the foundation is the legitimate owner,” he said.

However, Cassirer family members said in a brief statement forwarded by their lawyer that they would appeal the ruling, which was issued last Thursday.

“Museums and governments around the world recognize the need to return Nazi-looted art to its rightful owners,” said Laura Brill, a lawyer for the Cassirer family. “Here, it is undisputed that the Pissarro was owned by the Cassirer family until it was stolen by the Nazis in 1939.”

Mr. Acevedo, however, said that Ms. Cassirer already received adequate compensation postwar from the German government for her painting and that it “at no point was hidden,” unlike some other works of art stolen by the Nazis.

“Every case is its own case and not all the cases related to Nazism have gone the same way,” Mr. Acevedo said. “In this case, it’s clear that Lilly Cassirer was compensated by the German State.”

Judge Walter noted that Ms. Cassirer had settled after the war with German authorities “because the location of the painting was unknown.” The painting surfaced in the United States in 1951, when it was bought by Sydney Brody, a collector in California.

The painting was eventually acquired by Baron Hans Heinrich Thyssen-Bornemisza in 1976 and has been displayed in Madrid since the museum opened in late 1992. Mr. Acevedo would not discuss its possible market value, but said that it was insured for about nine million euros (or about $10.12 million). He called it an essential part of the museum’s collection of about 900 works. The museum also houses about 200 works on loan from the personal collection of Baroness Carmen Thyssen-Bornemisza.

Lawyers for the foundation and Spain initially argued that the case should be heard in Spain rather than the United States. One, Thaddeus J. Stauber, said the ruling was on merits and, even if now appealed, “we think this effectively ends the case.”

Mr. Stauber said that it also showed that an American court was willing to take into account the “complete history of the painting,” as well as recognize national sovereignty and the laws of other countries.

According to Mr. Stauber, who specializes in art restitution cases, “what is very significant about this case is that plaintiffs have repeatedly tried to bring these cases in courts in the United States, but the courts have said that we need to respect the laws in other countries.” He added: “One country can’t decide to be the world court.”


Because of an editing error, an article on Thursday about a judge’s ruling on the ownership of the 1897 painting “Rue Saint-Honoré, Après-midi, Effet de Pluie” by Pissarro misstated the dollar equivalent for the insurance on the work. It is insured for about nine million euros, which is about $10.1 million, not $7.98 million.