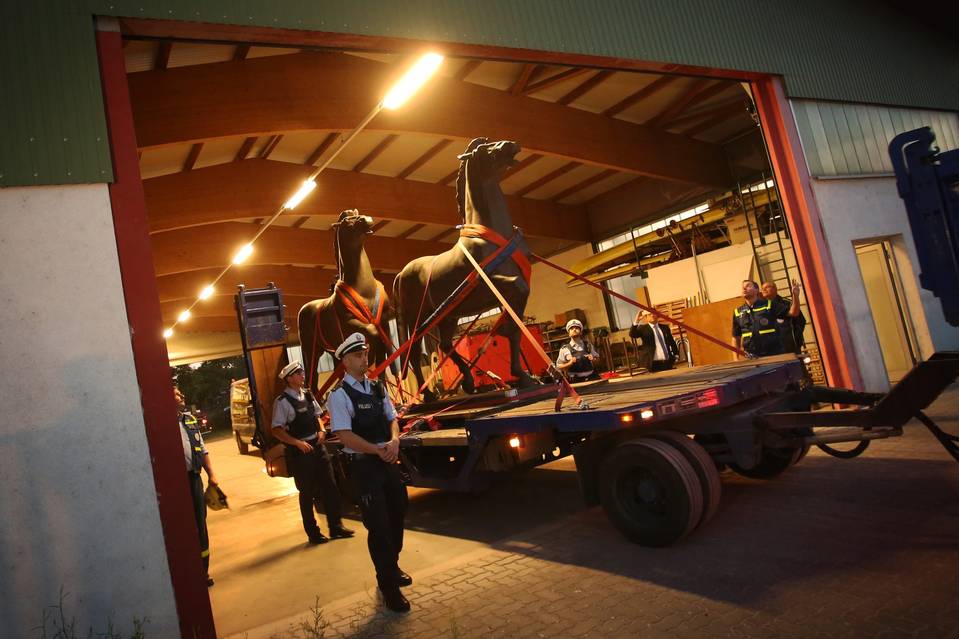 Horse sculptures were removed from a storehouse in Bad Dürkheim, Germany, last week. The two long-lost bronze sculptures were commissioned by the Nazi regime to adorn Adolf Hitler's chancellery

BERLIN—The discovery of missing Nazi-era sculptures during a police raid last week has cast light on a dark corner of the art market where some collectors pay handsomely for works by artists favored by the former National Socialist regime.

Tipoffs from art-market insiders led German police to search 10 locations last week, unveiling one of the most astonishing art finds of recent years: at least nine sculptures by Nazi court artists in a warehouse in the sleepy German town of Bad Dürkheim.

The find has focused attention on a small circle of collectors and dealers who buy and sell Nazi artifacts, from uniforms and weapons to artworks with multimillion euro asking prices. But the historically taboo nature of National Socialist propaganda art means the trade is anything but mainstream.

“It’s frowned upon of course because of [the artworks’] relationship with power,” said Andreas Hüneke, an art historian at Berlin’s Free University. “The debate over whether [Nazi art] should be displayed as artworks or just in a historical context keeps flaring up.”

The public display of Nazi paraphernalia like swastikas is banned in Germany and trade in historic Nazi memorabilia like insignia, uniforms and literature is allowed only under limited circumstances. Nazi-commissioned artworks also can be bought and sold legally in Germany provided they weren’t stolen or looted, although artworks with a totalitarian taint carry a historical burden here.

Investigators are now reconstructing the whereabouts of the sculptures since the end of World War II. Officials are investigating eight German men aged 64 to 79 on suspicion of handling stolen goods; police said they haven’t been arrested.

The sculptures at the center of the investigation are two horses by Josef Thorak that once guarded the entrance of Hitler’s imposing Chancellery in Berlin. For at least three decades, the horses also sat in a Soviet military base in East Germany. 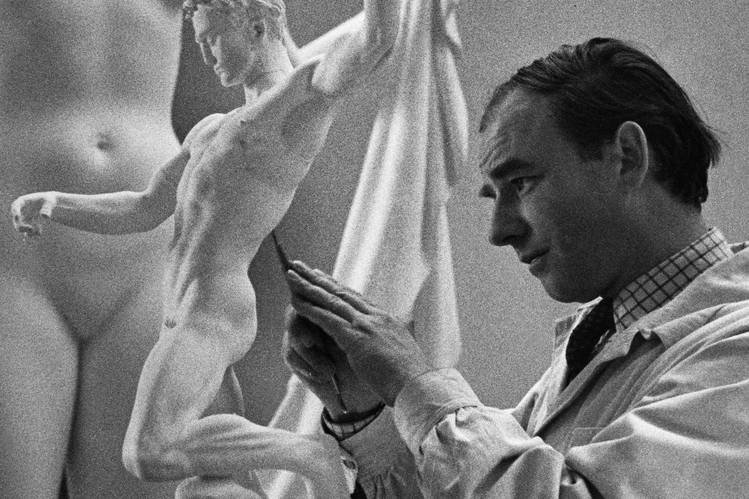 German sculptor Arno Breker working on a sculpture in 1942 for the Nazi party.

After the Red Army withdrew from Germany after the Berlin Wall fell, the sculptures disappeared, police say. But in recent months, they re-emerged via middlemen on the clandestine market for Nazi-era art for an €8 million ($8.8 million) asking price, according to prosecutors.

Because they were commissioned by the state, the artworks are the property of the federal government, according to the police and prosecutors. A spokesman for Monika Grütters, the German minister of culture and media, said if the investigations prove the German state is the works’ legal owner, the minister favors them being displayed in a museum with historical context about the Nazis’ abuse of art for ideological purposes.

A lawyer who represents the Bad Dürkheim businessman from whom police say they seized the statues, said his client legally acquired the artworks over 25 years ago from the Russian army and “the earlier manufacturers, and he didn’t actively offer them.

The Nazis, with their striking red, black and white swastika symbol, put art and architecture at the center of the totalitarian regime’s propaganda efforts.

“There is a huge black market [for Nazi art and paraphernalia], especially in the U.S. where you can buy and sell openly,” said Arthur Brand, whose company Artiaz tracks down looted art and investigates forgeries. German police said Mr. Brand helped track down the horse statues after receiving an anonymous tip.

The scale of the Nazis’ artistic ambitions means Nazi art has no parallel among other fascist regimes of the era. Far smaller markets exist for art like statues from Mussolini’s Italy and Franco’s Spain, experts say, though Nazi art does trade in those countries too.

“Spain with its fascist past is quite easy and Italy is easy [to trade in National Socialist memorabilia], but in Germany it’s a very secret market,” Mr. Brand said, adding the market for major Nazi artworks comprises only about 30 to 40 people in Germany. Tens of thousands deal illicitly in Nazi curios like uniforms, magazines and weapons here, artifacts that are also popular with collectors in South America and the Middle East, Mr. Brand said.

“Most have Nazi sympathies but that’s not always the case, because historically these pieces are very important,” Mr. Brand said. 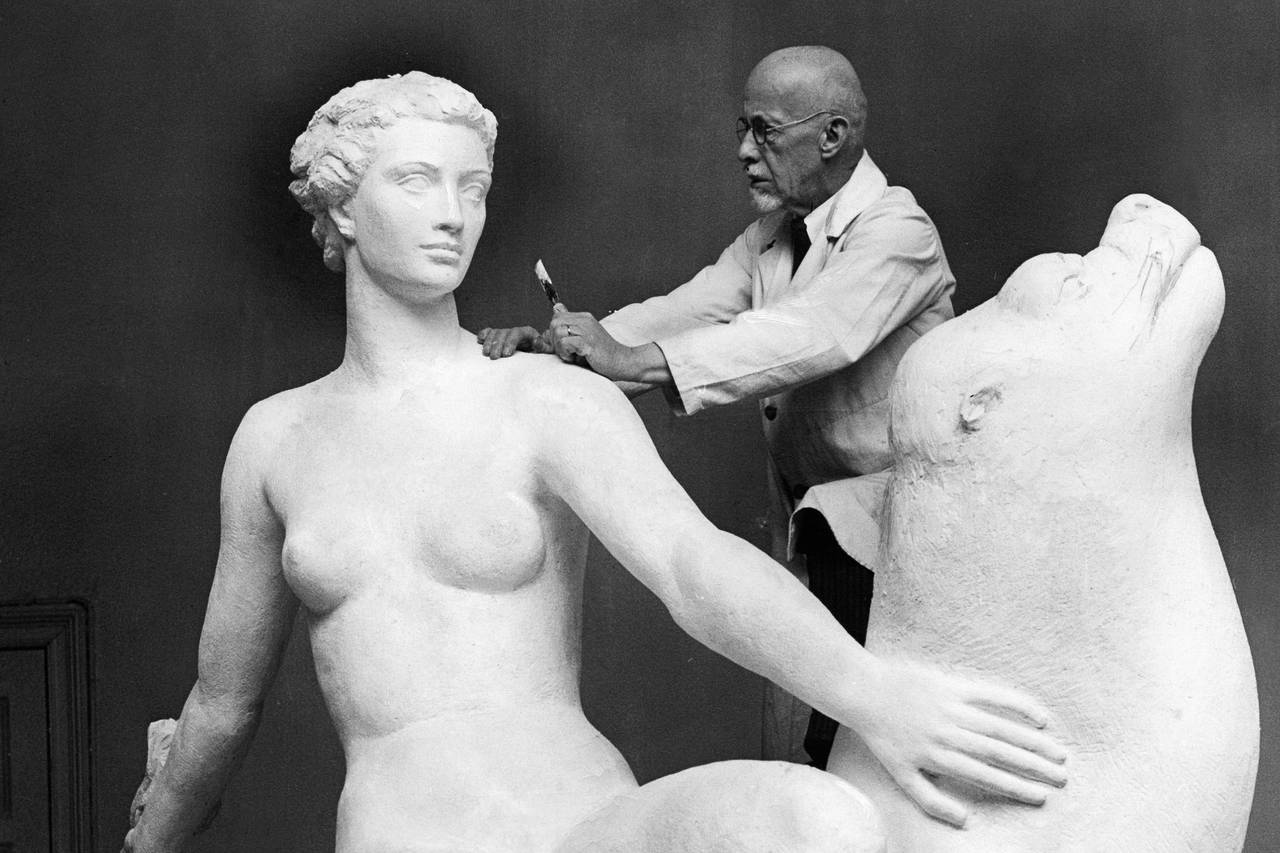 Fritz Klimsch works on a sculpture in 1940.

Birgit Maria Sturm, manager of the BVDG association of German galleries and art dealers, said she had never heard of any art fairs or public forum for Nazi-commissioned art works to be sold. “It’s absurd and perverse and mind-boggling that anyone would collect it,” Ms. Sturm said.

Henrik Hanstein, director of Kunsthaus Lempertz, an auction house in Cologne, said he has been offered a sketchbook and a watercolor by Adolf Hitler in the past, which he declined to sell.

Most mainstream art galleries and auction houses in Germany avoid displaying and selling Nazi-commissioned artworks, regardless of their artistic appeal, which usually celebrated myths and the cult of the body with teutonic themes like warriors and boxers. “All of us turn it down,” Mr. Hanstein said.

Alongside Thorak’s two horses, investigators seized two sculptures and three reliefs by Arno Breker, and statues titled “Galathea” and “Olympia” by Fritz Klimsch, another sculptor favored by the Nazis.

Hitler, who once aspired to a career as an artist, promoted visual propaganda on a large physical scale, keenly aware of public art’s ability to convey a message of racial and cultural superiority through widely exhibited images of athletic males and military prowess. Joseph Goebbels’s Nazi propaganda ministry poured favor onto artists deemed Unersetzliche Künstler, or irreplaceable artists, by the regime. 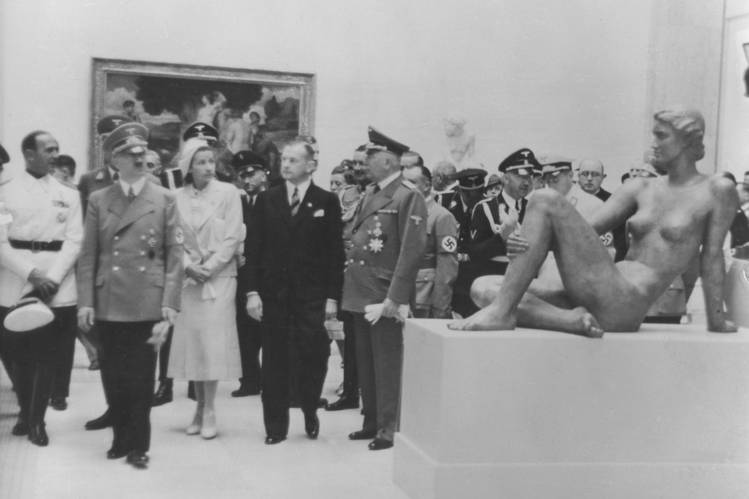 They were promised more: under Hitler’s megalomaniac plans to rebuild Berlin on a pharaonic scale as Germania, the artists’ monumental reliefs and sculptures over 50 feet high would have dotted the Reich’s capital. But much was lost in World War II bombing raids, and in postwar Germany, Nazi historical monuments and memorials were destroyed under the Allied denazification program, including works by Thorak.

Whatever their artistic merits, artists who celebrated Aryan ideology in their work remain taboo in postwar Germany, like architect Albert Speer and filmmaker Leni Riefenstahl, both deceased.

Lampooned as “Hitler’s Michelangelo” during his denazification trial, Breker received a small fine and resumed his career as a sculptor after the war. He died in 1991. Thorak was cleared by several denazification boards held until 1951 and died in 1952. There is a Josef-Thorak-Strasse, or street, in his hometown of Salzburg, Austria. But biographies of the men portray them as opportunists who welcomed the chance to boost their fame and prominence under Nazi sponsorship.