WIESBADEN, Germany - Liberators, engineers, warriors and musicians – the U.S. Army is called to be many things, but “art curators” is rarely one of them.

This is what some Soldiers – the “Monuments Men” – were called to be during World War II, with Wiesbaden’s own museum playing a central role in what was one of the more sensitive operations in the world’s most destructive conflict.

U.S. Army Europe personnel were treated to a special tour of the Wiesbaden Museum by its director, Dr. Alexander Klar, who explained the museum’s history as a collection point for reclaiming stolen Nazi art pieces recently. 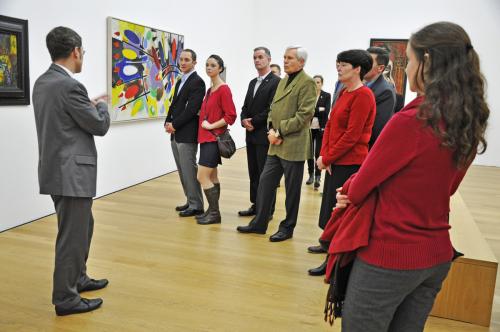 “We usually learn about all the bad things that happen in war, and tonight we’re going to see what good can come of it,” said Maj. Gen

Walter Piatt, USAREUR deputy commander. “We’re going to take a different look at history and what can happen if war is allowed to happen, instead of maintaining peace and security. The difference between looking at war ruins and art is sitting in this room today.” 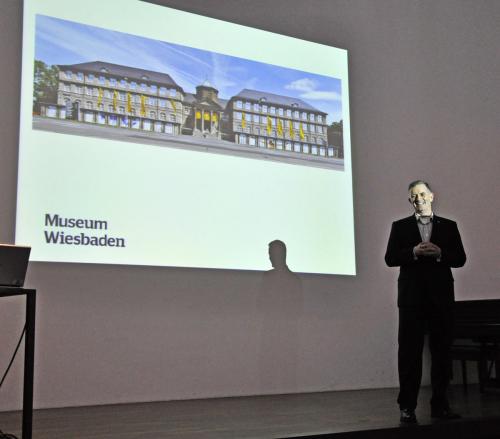 By 1943, Hitler had emptied most Berlin museums of their pieces, which were taken to Munich, Wiesbaden and Linz for storage. Nazis looted whatever country they invaded and stole “hundreds of thousands” of works of art, including those from Jewish families, Klar said.

But President Franklin Roosevelt wanted the priceless works of art to be saved for humanity, and so the Monuments Men – art curators, museums directors and art historians – were assembled and tasked to save it.

“They were deeply civilian in their upbringing, but also deeply in combat,” Klar said, adding that legend says they went so far as to disrupt battles in order to protect art. “It’s amazing what has been saved.”

From 1945 to 1952, more than 200 pieces – a fraction of the hundreds of thousands stolen across Germany – were saved at the Wiesbaden Museum, where the Army put on exhibitions to educate the Germans “back into civilization,” Klar said.

“Basically, the Army was running a museum, which was interesting,” he said. “But it was successful.”

Notably, some pieces were sent to the United States as “booty,” but Truman ordered them returned to Germany (except for offensive Nazi art, which remained in America), a policy known as the “Wiesbaden manifesto.” Art taken by Russian forces, however, was not returned.

“The American Army set the precedent,” Klar said, and since 2009 the museum has followed suit. With the help of researchers, the museum works to return the 200 works of art that remain to the families from which they were stolen – many of them Jewish – at the rate of one-to-three per year. Some families have even allowed the museum to keep the art as a gesture of goodwill and gratitude.

Some of the artwork was donated to the museum but are of “dubious provenance,” Klar said. For example, some were bought at forced sales of Jewish collections for below-market prices. The museum is working to identify these pieces in their collection and to return to the families of those who were forced to sell.

It is an extra step that the museum is taking (not required by any agreements signed after the war) attracting a lot of attention in the media, making headlines in newspapers as far away as Israel.

With more than 100 attendees, the tour, created and set up by Eleanore Boyse, Germany representative of the Hans Hofmann Trust and a USAREUR spouse, was also meant to spark another avenue for German-American connection.

Klar gave an abbreviated tour of the museum, explaining its concept and his desire to reach the American community in Wiesbaden. The museum offers both visual art and natural history exhibits, blending both seamlessly with minimalist aesthetics and a clean design to avoid overwhelming guests. The idea is to cater to both audiences.

Special exhibits include one of the largest collections of Russian artist Alexej von Jawlensky, minimalist art and an impressive collection of animal species, all beautifully displayed like artwork.

“Art is something that becomes iconic by people looking at it,” Klar said. “Every curator hopes that he has made good choices.”

More information about the museum, in German, can be found at www.museum-wiesbaden.de/. (An English version is in the works.)