University of Oklahoma fights claim to a Nazi-looted Pissarro painting 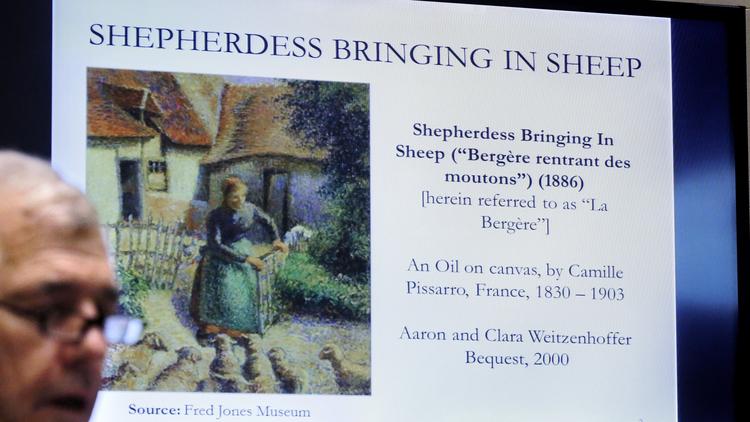 The University of Oklahoma is hoping to retain a Camille Pissarro painting it has held in its campus art museum for more than a decade in the wake of claims by a French-Jewish family that the work had been stolen by Nazis in 1941.

The university, which is pinning its defense partly on a 1956 ruling by a Swiss court, seemed to have prevailed last year when a federal judge in New York City dismissed a lawsuit by the former owner’s daughter. But a federal appeals court has revived Leone Meyer’s claim at least for the time being, ordering the judge who dimissed the case to deliberate further.

The immediate legal issue stems from a decision by Meyer, a Frenchwoman living in Paris, to sue in New York on the grounds that the university had ongoing business dealings there, instead of turning to a federal court in Oklahoma.

Judge Colleen McMahon ruled that Meyer’s theory was more than a stretch and dismissed the case.

But now two judges in the U.S. 2nd Circuit Court of Appeals have ordered McMahon to reconsider her decision; they noted in their ruling Thursday that she has the authority to transfer the case to Oklahoma, if she chooses, instead of throwing it out.

In its motion to dismiss the case, the university contended that a Swiss court’s 1956 ruling against Meyer’s father deserves to be  respected because those proceedings were “full and fair,” and should not be revisited in the United States.

But a new era of international accords recognizes that Jews’ claims to Nazi-looted property in fact often were not handled fairly by postwar authorities in Europe.

The Washington Principles of 1998 and the Terezin Declaration of 2009 affirmed that claims for Nazi-looted art should be decided on their merits rather than on procedural grounds such as jurisdiction or statutes of limitations -- both of which the University of Oklahoma has raised in its defense.

The two international declarations, signed by the United States, technically apply only to art in national collections, and would not bear directly on works at a state university.

However, in some instances museums and private owners have felt ethically compelled under the new standards to return art when there was clear proof it had been stolen by the Nazis.

In 2011, the Zimmerli Art Museum at Rutgers University – New Jersey’s state university – voluntarily returned a 16th century painting by German artist Hans Baldung Grien to Los Angeles residents Simon and Nick Goodman. The Nazis had seized the art collection and stately home of the Goodmans’ Dutch-Jewish grandparents, then sent them to their deaths in concentration camps.

The University of Oklahoma received Pissarro’s “Shepherdess Bringing in Sheep” as part of a 2000 bequest of more than 30 paintings from Aaron and Clara Weitzenhoffer, an American family that had made a fortune in the oil business -- and for whom the university's Weitzenhoffer School of Fine Arts is named.

According to court documents, the Weitzenhoffers had bought the painting from a New York art dealer in 1956, not long after the Swiss court had rejected the claim by Meyer’s father.

The Associated Press reported that a resolution has been introduced in Oklahoma's state legislature that would require the university to relinquish the Pissarro.

The AP said that the University of Oklahoma had issued a statement Saturday saying it is “continuing its efforts to work with [Meyer] to determine all the facts in this matter, some of which may still be unknown, and to seek a mutually agreeable resolution.”