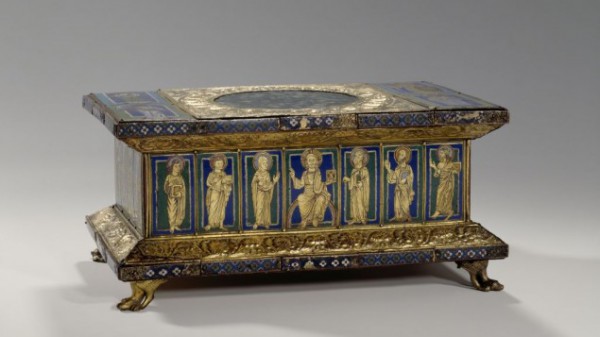 Portable altar of Eilbert, from the Guelph Treasure (1150)

Two claimants to a collection of medieval ecclesiastical treasure valued at $276 million and known as the Guelph Treasure, filed a lawsuit against the German government at a US District Court in Washington on Monday, the Wall Street Journal reports.

The claimants, Alan Philipp and Gerald Stiebel, allege that their Jewish ancestors sold the collection under duress for much less than what it was worth to Hermann Göring, the second-most powerful man in Nazi Germany. Göring later presented the treasure to Adolf Hitler as a gift. Today the treasure is on display in the Bode Museum in Berlin.

However, officials at the Prussian Cultural Heritage Foundation, which manages Berlin's state museums, maintain that the transaction was consensual and that the collection was acquired at a fair market price at the time. This view was upheld by the Limbach Commission, Germany's advisory panel on Nazi-looted art. (See Why Ronald Lauder Is Right About Nazi-Looted Art in Museums and American Association of Museums Goes Easy on Nazi Loot.)

“The sale of the Guelph treasure cannot be considered a forced sale," stated the Limbach Commission quoted in the New York Times. "Therefore it cannot recommend a restitution of the Guelph Treasure to the heirs of the four art dealers."

The claimants' attorney, Nicholas O'Donnell, who invoked jurisdiction under the Foreign Sovereignties Immunities Act, told Bild “The value of the collection was four to six times what was paid to the owners at the time." O'Donnell also criticized the slow, outdated, and opaque processes in which the German government deals with restitution cases. The attorney lamented that “The refusal of the German government to acknowledge the losses of the victims that managed to save their life, but not their livelihood and possessions, lies in stark contrast to Germany's historical obligations."

Heightening tensions further, Hermann Parzinger, the president of the Prussian Cultural Heritage Foundation, recently announced that the state of Berlin had approved an export ban on the Guelph Treasure by adding the works to the list of nationally significant cultural goods. It is unclear if Parzinger and German Culture Minister Monika Grütters were aware of the US lawsuit at the time of the announcement.

The claimants however, are determined to see justice. Gerald Stiebel, grandson of the art dealer Issac Rosenbaum told Bild "The German authorities say that the Nazis acquired the collection fairly. How can that be? We hope that we will get justice in a US court."