BERLIN — Fresh mysteries and marvels of the art trove amassed by a Nazi-era art dealer and kept secret for decades unfurled on Thursday when the Swiss museum that inherited the collection revealed all 1,600 or so works to the world for the first time.

The catalog of the trove includes the first glimpse at 250 works — including fine oil paintings by Renoir, Cézanne, Monet, Manet, Gauguin and Pissarro — that the reclusive Cornelius Gurlitt, who died in May at 81, had squirreled away in a house he owned in Salzburg, Austria.

The list of those works was heavy on French masters, but it also included two oil paintings by Jan Brueghel the Elder, a river landscape and a still life; an unusual Max Ernst collage; and lithographs by Edvard Munch.

Most of the Gurlitt collection was uncovered in 2012 when the Bavarian tax authorities investigating Mr. Gurlitt stumbled on the artworks in his Munich apartment. The discovery was not disclosed until more than a year later. That revelation opened the prospect that art looted by the Nazis from mostly Jewish owners, or branded degenerate and removed from museums, could be returned to its heirs. 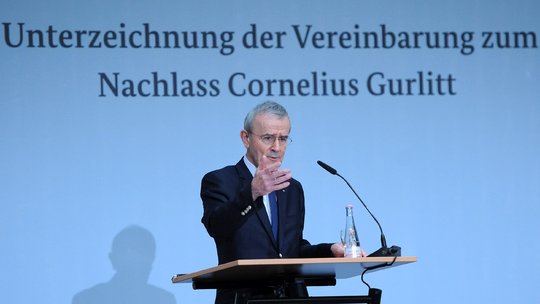 Christoph Schäublin, president of the Kunstmuseum Bern’s board of trustees, said they will accept works from the late Cornelius Gurlitt, whose trove included masterpieces looted by the Nazis.

Though art historians from a German task force have pored over the Munich works for months, the Salzburg hoard came to light only in February.

Mr. Gurlitt bequeathed the entire collection compiled by his father, Hildebrand, one of four Nazi-era art dealers allowed to buy and sell plundered art, to the Kunstmuseum in Bern, Switzerland, which on Monday signed an agreement with the German authorities regulating the transfer of works and investigation of their provenance.

Only works deemed free of suspicion that they were confiscated from private owners, or forcibly sold below market value, will go to Switzerland. Any other pieces will remain in Germany at an undisclosed location where art historians have been cataloging each work.

The Kunstmuseum said Thursday that it was making the lists of the collection public “in the interests of transparency.”

The president of the museum’s board, Christoph Schäublin, said in accepting the collection on Monday that it was “anything but easy,” given its history, and he and Monika Grütters, Germany’s top federal official for culture, stressed that if there was any doubt about the provenance of a work it would stay in Germany.

The Salzburg works included Cézanne’s rendering of his beloved Mont Ste.-Victoire, dated 1897, and a 1902 Paris cityscape by Pissarro, titled “The Louvre Seen From Pont Neuf.” The sole Monet in the Salzburg trove was one of his views of Waterloo Bridge, this one from 1903. The Manet was a seascape. The Gauguin was titled in the Bern list as “People Lying Down in Candlelight,” from 1893.

The 195-page list of works found in Munich was not cross-referenced with 465 works that have been listed on the German site lostart.de for months in an effort to track down any potential claimants or heirs.