The art world’s shame: why Britain must give its colonial booty back

The self-righteousnessness of British museums stops them from returning masterpieces pillaged long ago to their rightful owners. It’s time they stopped hogging the world’s treasures 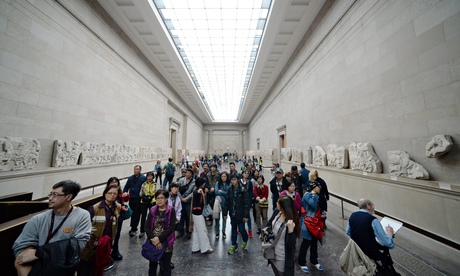 Share the wealth … the Parthenon marbles at the British Museum. Photograph: Facundo Arrizabalaga/EPA

Britain’s museums need to face up to a reality. Cultural imperialism is dead. They cannot any longer coldly keep hold of artistic treasures that were acquired in dubious circumstances a long time ago.

Amal Clooney may or may not be the best ambassador for the Greek government in its long campaign to return the Parthenon marbles to Greece. The celebrity support this cause has attracted ever since Lord Byron made it part of his romantic image in the early 19th century keeps it in the limelight, but also allows the British Museum, where the best sculptures from the 5th century BC Parthenon continue to be kept, to portray its critics as self-publicists.

Yet this is not the only case of a cultural treasure whose true ownership is disputed. The Benin sculptures in the British Museum, taken from the splendid west African city by a British “punitive raid” in 1897, are never going to rest easy in Bloomsbury. Meanwhile the international mood is shifting and will inevitably continue to shift towards a consensus that many wonders of the world are wrongfully hogged by western museums.

In France, whose museums are just as treasure-laden as ours, the inviolability of the “national patrimony” is finally being questioned. We need to follow them down that modern road.

Britain has a particularly bad image when it comes to this, for two reasons: Lord Elgin, whose stripping of the Acropolis has been a stain on our international reputation since the early 19th century, and the fact that we were, before 1914, the most powerful of all imperial powers. Instead of seeking to live down these blemishes, we are hugely self-righteous about our possession of a vast haul of world art. We come across as uniquely determined to hold on to our booty and not prepared to meet critics halfway.

I realised this recently on the Greek island of Aegina. It has a superb classical temple whose sculptures were removed and taken to Bavaria at about the same time Britain took the frieze and pediment sculptures of the Parthenon. Today they are in Munich, but there is no global outcry for their return. Why not? Well, if you visit the temple you can’t help noticing the prominent German involvement in archaeology and conservation work there. German scholarship has kept up a constant, reciprocal relationship with Aegina. There is no equivalent British involvement in the preservation of the Parthenon.

Why not? Instead of seeing Athens as its enemy, the British Museum should have got involved years ago in a very big way in maintaining and researching the Parthenon. It should have collaborated on the new Acropolis Museum (and offered to loan some of its astonishing sculptures). The whole issue could have been diffused by a more generous cooperative attitude.

The Acropolis Museum, a wonderful gallery, reveals why cultural colonialism is doomed. It is true the whole world flocks to the British Museum and the Louvre, and surely will continue to do so. But world-class museums are not confined by some act of god to northern Europe or north America. The Louvre Abu Dhabi has been criticised for the conditions inflicted on its workforce. But in the long term, it points to a world where great art collections will be widely and evenly spread. The feeble excuses for keeping stolen or seized art treasures in former imperial capitals are becoming ever more feeble.

In the end, the defence for hanging on to contested cultural goods boils down to the deeply offensive notion that Britain looks after the Parthenon marbles or Benin heads and plaques better than Greece or Nigeria ever could. How long can our museums keep up this arrogance? Not long.

The British empire is dead. So is the age of cultural booty.