After OU was sued for housing a piece of art that was looted by Nazis during World War II, The Daily discovered that the university's museum currently has 40 pieces of art with Nazi connections.

The Fred Jones Jr. Museum of Art currently has 40 pieces of art with Nazi provenance, according to the Nazi-Era Provenance Internet Portal and confirmed in a statement from OU officials in an email from OU press secretary Corbin Wallace.

The Nazi-Era Provenance Internet Portal is a searchable database of items in U.S. museums that could have ties to Nazi Germany during the times when Nazis were looting art from occupied countries. The Nazi era is typically considered between 1933 and 1945, when World War II ended.

To be added to the registry, a piece must have been created before 1946 and acquired by the museum after 1932, changed owners between 1932 and 1946 and it must have been in continental Europe during those years, according to the database’s website.

The database stores information from 175 self-reporting museums. The database is a registry of 29,031 individual items with Nazi provenance.

The piece involved in the lawsuit is a painting by French impressionist Camille Pissarro, “Shepherdess Bringing in Sheep (La bergère rentrant des moutons).” Leone Meyer filed suit against OU in May 2013 to reclaim the painting, which was stolen from her family by Nazis Occupation forces and the Vichy Regime in Nazi-occupied France sometime between 1940 and 1944. 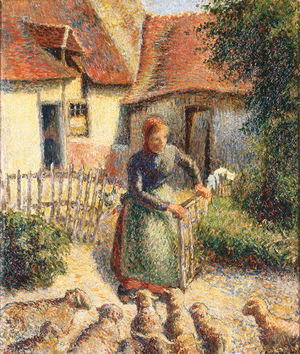 Some of the items with Nazi provenance in the museum include “Portrait of Alexander Reid” by Vincent van Gogh, “Riverbank at Lavacourt (La Berge à Lavacourt)” by Claude Monet and three other pieces by Pissarro: “Nude with Swans,” a lithograph of “Nude with Swans” and “The Meadow at Eragny (Le Pré à  Eragny),” according to the database. All of those pieces were donated by the Weitzenhoffers.

The statement said many pieces in the museum’s collections are gifts to the museum, and all pieces reported on the database were gifts.

Because of the breadth of art looting during the Nazi era, it is fairly common for museums to have some pieces of art in their collections with some Nazi provenance, said Dewey Blanton, American Alliance of Museums strategic communications director.

The looting, which confused the provenance of many pieces of art by switching hands so many times, and the economic boom for the U.S. following World War II are two factors that contribute to the prevalence of art with Nazi-era provenance in American museums, Blanton said.

During the economic boom, many wealthy Americans began collecting art, which was now available in large quantities after the war.

OU’s statements echoed Blanton’s, but it added that before the mid-’70s record keeping was inconsistent for the pieces that flowed into the U.S. after World War II, meaning many of the wealthy Americans who bought these suspect artworks were unclear of the art’s origins.

In many cases, like in the case with “Shepherdess Bringing in Sheep,” the piece’s new owners died and the works were donated to museums like Fred Jones Jr., Blanton said.

The portal was created for just that reason, Blanton said.

The portal serves a two-fold purpose: to help museums that may have art with Nazi-era provenance and to help heirs find pieces looted from their families.

“It’s not easy work. As you can imagine, there’s a lot of investigative work that goes into this,” Blanton said.

The statement said that museum officials are unaware of any pieces of art “that have established ownership other than in the university or the OU Foundation.”

Meyer’s suit against the university prompted criticism from community members and lawmaker Mike Reynolds, who warned of future lawsuits regarding the different pieces of Nazi-era provenance art housed at Fred Jones Jr.

Since then, Emily Neff, former museum director, resigned on Oct. 15 after serving in the position since January 2014.  OU President David Boren said her resignation is not linked to the lawsuit.

Following Neff’s resignation, Reynolds sent a letter to the American Alliance of Museums, formally known as the American Association of Museums, requesting an investigation into Fred Jones Jr. because of potential violations to the association’s ethics and standards code.

Reynolds also sent a letter to Boren asking him to clarify the circumstances surrounding Neff’s resignation, which came a day after Reynolds had asked the university to clarify its position involving the painting.

In May, the U.S. District Court for the Southern District of New York dismissed Meyer’s suit with the university for lack of personal jurisdiction, since the case involved people living in Oklahoma, not New York where the case was based, according to provided court documents.