A family’s decades-long search for a Nazi-looted painting has ended at the Art Gallery of Hamilton. 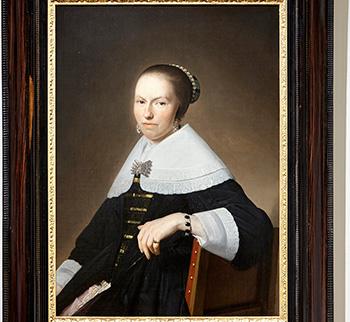 Portrait of a Lady, by Dutch 17th-century artist Johannes Verspronck, was stolen in 1940, along with other possessions of Alma Bertha Salomonsohn, who had left Germany for London in 1939 and put her belongings in a container to be shipped to her.

After it was stolen, Salomonsohn tried to lay claim to the portrait, but was unsuccessful. It was sold at auction in Hamburg in 1941, with the proceeds going to the tax office in Berlin-Brandenburg.

Salomonsohn’s husband Arthur Salomonsohn, chair of the board of the Deutsche Bank, who died in 1930, had assembled an important art collection. Salomonsohn, who changed her name to Solmssen after immigrating to the United States in 1948, began a search for her husband’s paintings. After she died in 1961, her family continued the search.

Portrait of a Lady has been part of the AGH’s collection since 1987, when the gallery’s volunteer committee purchased it for $58,000 at a Sotheby’s sale of important old master paintings in New York, unaware it had been stolen during World War II.

The Solmssens retained a Berlin law firm that specializes in the restitution of Nazi-confiscated works. In 2003, the law firm notified the AGH that it believed Portrait of a Lady had been stolen. More than 10 years of negotiations and research followed to prove the painting’s provenance until the gallery decided earlier this year that it belonged with the Solmssens.

When Leca joined the gallery in May 2012, this was the first file handed to him. He has spent hours researching the painting’s story.

“I found it was on the sought works database [www.lootedart.com]. There is a bill of sale from 1909 from the gallery where the portrait was purchased. There are documents in Germany showing the Gestapo had taken Alma’s possessions,” Leca said. “The database of sought works is relatively new and was not around when the AGH purchased the painting. The Art Gallery of Hamilton bought it in good faith.”

Leca said that in these situations, galleries have to allow for certain gaps in documentation due to the circumstances of the war.

“You have to take people at their word. But as stewards of the civic collection of Hamilton, we can’t be just giving stuff back without checking. The overarching evidence shows the painting belonged to this family, and the Gestapo and the evildoers got it.”

The gallery has agreed to return the portrait to Sarah Solmssen, Alma’s great-granddaughter-in-law, who represents Alma’s heirs.

“We are grateful to the Art Gallery of Hamilton for its decision. Portrait of a Lady hung in Omi’s [Alma’s] bedroom in Berlin and we are happy for its return. We are sad only that Omi [Alma] did not live to see her painting again,” Solmssen said in a statement.

Last month, Sarah and her husband Peter Solmssen came to Hamilton to view the painting. They advised the gallery that it could remain there until April 26, 2015, when AGH’s Art for a Century: 100 for the 100th centenary exhibition closes.

“It’s a story of displacement and wrongdoing,” Leca said. “But it’s also the story of the dogged pursuit of one woman. She kept pushing and looking and then her descendants pushed and looked. This is a sad story but with a happy ending.