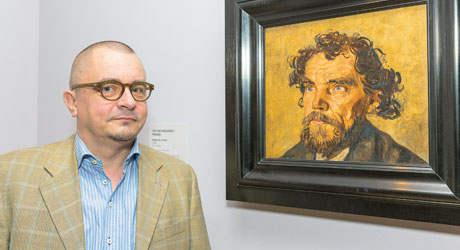 FOR the past 23 years, Swiss lawyer Olaf Ossmann has been trying to track down a major collection of paintings belonging to a wealthy Jewish businessman who fled the Nazis before the outbreak of World War II.

The collection of Richard Semmel housed more than 120 paintings by masters such as Renoir, Pissarro, Monet, Gauguin, Raphael and Titian.

So far, ownership of 24 paintings from the prewar collection have been resolved, with the latest addition being Head of a Man that has been in the National Gallery of Victoria’s (NGV) collection since 1940.

Ossmann was in Melbourne earlier this month to meet NGV director Tony Ellwood to sign off on an official agreement that acknowledged the rightful owners of the painting. It is believed to be the first case of its kind in Australia involving the restitution of an item from a forced sale in Nazi Germany.

In addition, the painting which was withdrawn from public view earlier this year, is now back on display at the NGV for another year under a loan agreement.

“It was important that the injustices of the past were acknowledged and the NGV has been clear on their position and swift in their response,” he said. “It allows the heirs to concentrate on the pending procedures to restitute the remaining parts of Richard Semmel’s collection.”

The NGV bought Head of a Man in 1940 through the Felton Bequest for £2196 (equivalent to more than $165,000 today). It was thought to have been painted by Vincent Van Gogh in 1887 and worth $5 million, but in 2007 experts at the Van Gogh Museum in Amsterdam determined that the portrait was not a Van Gogh after all, assigning credit to an anonymous contemporary artist.

While Ellwood would not comment on its current value, media reports have put its price at about $200,000.

Semmel was an international textile manufacturer with a passion for art. He had sustained losses before Hitler’s rise to power, but in 1933, pressure from Nazi-dominated unions and banks, combined with anti-Jewish boycotts, meant his debts became crushing.

Within a year, Semmel, then in his late 50s, fled from his home in Berlin to Holland. Forced to pay various taxes levied on Jews leaving Germany, he sold his art at auction in Amsterdam.

Semmel’s brother also owned a factory in Amsterdam and collected art before the war, during which both he and his wife perished in concentration camps.

In 1939, Semmel and his wife found refuge in the United States. When Semmel died in 1950 – his wife had died in 1945 – he left his estate to Grete Gross-Eisenstaedt, a childhood friend from Berlin who cared for him in the US.

In 1958, her interest passed to her daughter, who had escaped from Germany to South Africa. In 1991 Gross-Eisenstaedt’s daughter and granddaughters (now retired and who wish to remain anonymous) approached Ossmann about recovering Semmel’s art collection.

“At that time it was difficult to find paperwork to prove ownership and even the names on the paintings are sometimes changed,” said Ossmann, who is Jewish. “But she remembered seeing Semmel’s collection as a child – to her it was a huge collection.”

There was little progress until 2011 when the NGV’s provenance research department discovered that Head of a Man was listed as one of the works for sale from Semmel’s collection in a 1933 auction catalogue, and updated its website.

In 2013 Ossmann contacted the NGV about the painting.

“We needed to know all the information before we could make a claim to return the painting to its rightful owners,” said Ossmann, who praised the goodwill and ethical stance taken by the gallery in honouring the Washington Conference Principles on Nazi-confiscated Art and the Terezin Declaration.

“In other cases we have found that the owners don’t respond to our requests and it can be a difficult and frustrating process.”

In a statement earlier this year the NGV said: “The NGV takes its responsibilities seriously in regard to determining the history of ownership of works of art, including the period from 1933 to 1945 when systematic looting, the confiscation of artworks, and persecutory anti-Semitic policies occurred under Nazi rule.”

Ossmann has been handling restitution and inheritance claims for Jewish families for more than a quarter of a century and says the work requires a lot of patience, both from him and his clients.

He is thrilled that, 80 years later, Head of a Man is being returned to the heirs of its owner.

Head of a Man is on display at NGV International, 180 St Kilda Road, Melbourne in the French Impressionism room. Inquiries: www.ngv.vic.gov.au

PHOTO of Swiss lawyer Olaf Ossmann and Head of a Man painting at the National Gallery of Victoria.