Montreal filmmaker Eric Scott not only takes the road less travelled in pursuing subjects for his documentaries, but also the road filled with more barriers and obstacles. 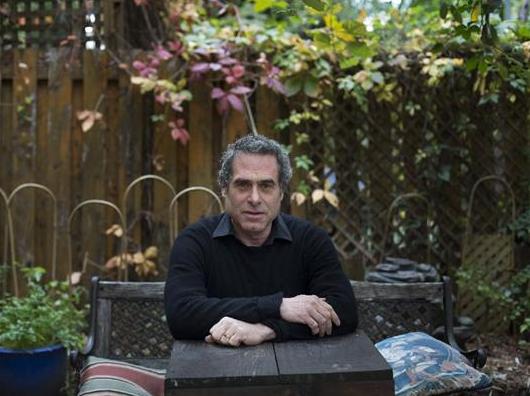 Montreal filmmaker Eric Scott is heading off to Poland to shoot a documentary about attempts to get restitution from the Polish government for land and businesses taken away during the second world war, photographed in Montreal, on Thursday, October 2, 2014

Scott’s acclaimed documentary Leaving the Fold offered a fascinating and rare peek into a world most outsiders have never been able to penetrate. He chronicled the journey of five ultra-orthodox Jews who left their religious fold and spoke candidly of the consequences of doing so.

In Je me souviens, Scott focused on renowned Québécois author and historian Esther Delisle and her probe into the study of fascism and anti-semitism as it related to nationalism in this province during the 1930s and ’40s.

Equally controversial was The Other Zionists, the Scott doc about a group of Israeli women seeking to safeguard the rights of Palestinians crossing military checkpoints in the occupied West Bank.

For his next film, Scott will soon be heading off to Poland to tackle one of the thorniest issues still unresolved from the Second World War. That would be the issue of restitution for those whose homes, lands and businesses were taken from them by the Nazis and their henchmen during the war.

It wasn’t just the Jews of Poland – all but eradicated during the war – who lost everything, but also those Poles who came to their aid, collaborated with the Allied forces and resisted the Nazi presence in their country.

Restitution will examine the plight of those seeking to be compensated for what was taken away from them during the Second World War. But it will also delve into varying philosophical issues on the subject.

“Poland remains the major European Union member that hasn’t passed a restitution law to pay back those individuals who had their property stolen during the Holocaust and the subsequent Communist aftermath,” says Scott, over coffee in a Plateau café.

“There were 3 million Jews in Poland. The Germans and their Polish helpers did such an efficient job of killing first-, second- and third-generation Jews, essentially killing off anyone who could possibly (put in a) claim. In terms of restitution, we’re talking about people who survived the Holocaust or who had family who survived it and who had the paperwork to prove it. And who had the willingness to go through the whole process.”

So Scott thus concludes that this pool of 3 million people has shrunk to a small group willing to go through the hoops of getting their property back. But it’s more than money at the root of the problem.

“It’s a very complicated issue,” Scott says. “It’s not just about real estate. It’s about coming to terms with Poland’s history. Poland was also a terrible victim of the Germans. Poland suffered tremendously under the German occupation. And Poles who tried to come to the aid of Jews and others paid a huge price, as did their families.”

Scott’s fascination with the subject came innocently enough. He had been invited to Poland on two occasions to present his films.

“It was the only Jewish film festival in the world organized by non-Jews,” he says. “I didn’t know what to expect there, but I was very charmed by the country, particularly among the chattering classes of Warsaw. I felt strangely at home there – the food, the culture, the irony – even though my roots are third-generation Canadian-Jewish and before that, Russian and Romanian, with no Polish background at all.

“But at the same time, I felt this fear and longing and past history that also animated the place. That combination of love and hate and passion made me aware that there was unfinished business. I would wander around Warsaw and noticed that all this real estate which had belonged to Jews and others was there but that the people weren’t.”

And so the seed was sown for this documentary. But Scott was also quick to conclude that as an outsider he was hardly in a position to be judge, jury and executioner.

“Poles can’t be held responsible for what happened 70 years ago, or even 50 years ago. But at the same time, this is still an issue that has to be dealt with. Curiously, upon researching the subject, I discovered that 80 per cent of the restitution claimants are Polish Catholics. But the spin there is that: ‘Oh, it’s the Jews who want their property back.’ This has opened up a Pandora’s Box of nasty, evil things.”

As a consequence, Scott feels many Jews are reluctant to come forward to talk about restitution in Poland. He notes that the situation regarding restitution in Germany took on a much different tone, which explains why the Germans were able to come to terms with claimants.

“It’s based on the notion of guilt versus innocence,” Scott says. “The Germans accepted their role, whereas the Poles felt they were victimized as well. Which leads to the question: Can the victim also be the victimizer?”

Contentious as his choice of film subjects may be, Scott doesn’t see himself as someone forever trying to provoke.

“I see my work simply as starting conversations about things that people don’t like to talk about,” he says with a smile. “If I’m going to make documentaries, let them be films that open conversations. That said, that is not necessarily what the funders and the broadcasters are after. They’re more comfortable with stuff that’s not going to challenge the status quo so much.

“In this case, I’m not after trying to destroy Poland in the world’s view. I can’t tell the Poles whether they should pay back or not. I have no right to do so, all the more so since we have our restitution issues in Canada with our native people. I don’t see myself as someone trying to provoke for the hell of it. The point of the exercise is not to go out with a hatchet, but simply to begin a dialogue. Isn’t that the function of art?”

For more information about Eric Scott’s Restitution, go to www.restitutionthedocumentary.com