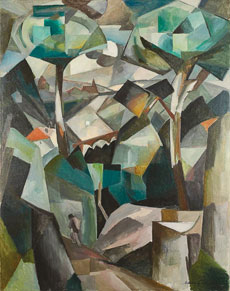 Four deputies of the French National Assembly visited Washington, D.C., and New York City last month, but this was no sightseeing holiday.

The French officials met with representatives of B’nai B’rith International in the District and visited New York State’s Department of Finance, two very different organizations that share the same expertise sought by the French lawmakers: restoring stolen Nazi art to its rightful owners.

Almost seven decades after World War II, some 2,000 works of looted art are hanging in French museums. The politicians’ visit was part of a renewed push by the French government to find the owners — most of them Jews or their descendants — of the collection of unreturned works, known as the Musees Nationaux Recuperation, or MNR. The restitution process has proceeded by fits and starts since the Allied victory over Germany in 1945. Some familiar with the story of the MNR collection say that the French have been reluctant to do much that would remove art from the walls of their museums.

Representatives of the French Embassy in Washington, which arranged the politicians’ visit, could not be reached for comment.

As the Nazis systematically murdered the Jews of Europe, they also spent money and manpower looting the Jews’ artwork, warehousing it to be sent to a museum in Austria planned by the art-loving Fuhrer.

“Some of this stuff may have come from families that are or were important, or conversant with art,” said Ori Soltes, former director of the B’nai B’rith Klutznick National Jewish Museum and co-founder of the Holocaust Art Restitution Project. “I would imagine that the lion’s share belonged to people who were not big collectors or a family that had one painting for some reason.”

Today’s masterpiece was probably yesterday’s speculation, he said. “In the 1870s, you could get a Monet for a fairly small amount of money.”

But returning the art to its rightful owners is no easy task, said Eric Fusfield, director of legislative affairs for B’nai B’rith International.

“Most survivors are deceased now. We’re really talking about descendants now, and most don’t have documentation. They have anecdotes and might not be able to name a specific work. That’s part of the challenge.”

Are the French not only withholding works of beauty from owners, but also depriving them of a fortune? Works by big-name artists could “easily be in the multimillion dollar” range, Soltes said.

In 1999, the Seattle Art Museum returned “Oriental Woman Seated on Floor” by Henri Matisse to the descendants of the influential French Jewish art dealer Paul Rosenberg after the family filed suit in federal district court. As the Nazis advanced on France, Rosenberg attempted to hide part of his extensive collection. He ultimately failed and spent the postwar years until his death in 1959 trying to reclaim the lost works.

“But plenty are not at that level,” he added.

Not just a French problem

As the story of the Matisse painting in the Seattle Museum of Art attests, looted paintings are not solely a French problem. It is one of the unintended consequences of the Allied victory in World War II.

Faced with a devastated continent, the Allies decided they did not have the resources to return the items to their owners. So they decided to return the art to their countries of origin and let the various governments sort out ownership, a policy called “external restitution,” according to Wesley Fisher, director of research for the Conference on Jewish Material Claims Against Germany, also known as the Claims Conference, which did not participate in meetings with the French parliamentarians last month.

The approach had mixed results. The Soviets took the paintings that fell under their control and shipped them to hang in their museums.

In France, about 100,000 stolen artwork claims by French citizens, most of them Jews, were filed with the French government, Fisher said. By 1949, about three-quarters of the claimed artworks had been returned to their owners, Fisher said. That left about 15,500 works whose owners could not be found. Of those, 13,500 were sold. The remaining 2,000 “better quality works” became the MNR collection, he said.

The French have mostly paid lip service to restituting those works, say Fisher and others. That’s why in the 60 years since the bulk of works were returned to their owners, only 100 of the MNR pieces have been restituted.

“They claimed for the longest time that they were doing a lot about the MNR collection,” Fisher said. “But they were hiding the fact that they hadn’t really done research on the collections in their museums.”

Added Soltes: “They like having the stuff in their collections. Which is why the Renoirs and Monets were there for so long.”

Interest in France in returning the art has grown and ebbed over the decades. There were attempts in the 1990s and 2000s to make progress in restitution, with few results. Hector Feliciano’s book “The Lost Museum,” about the wartime looting of art, caused a furor for a while when it was published in 1997. A 2008 exhibit at the Israel Museum in Jerusalem showed 53 looted paintings and invited rightful owners to take them home.

Last year, French President Francois Hollande announced a new initiative to track down families rather than wait for them to come forward. But how do you do that? That’s one of the questions the French delegation was asking in Washington and later in New York, in meetings with Sotheby’s and New York State’s Holocaust Claims Processing officials.

Fusfield said that in meeting with the French legislators, he was “mindful that there are difficulties, such as how to find survivors and heirs and how to ease legal and bureaucratic obstacles.”

The question of determining a record of ownership, or establishing “provenance,” was the subject of the group’s meeting at the National Gallery of Art, said Deborah Ziska, chief of press and public information.

“During the meeting some members of the delegation inquired about our WWII provenance research project, and we briefed them on this,” she said.

But with B’nai B’rith, the group talked about specifics, according to Gerard Leval, the organization’s general counsel, who took part in the meeting.

“It was good to hear people who sincerely want to do the right thing,” he said. “Almost nothing during the Holocaust was random [including the theft of art]. We said, ‘Go to your documents — when it was taken, from whom it was taken and from where it was taken.’”

The B’nai B’rith group suggested that the French advertise in publications with Jewish readers in the United States and Argentina, Leval said. They also pointed out that with anti-Semitism and xenophobia flaring up in France, the government could score propaganda points by showing that it “was doing its very best in areas where it can help the Jewish population,” he added.

Fusfield isn’t ready to declare victory yet. He recalled the March ceremony in Paris where the French culture minister returned three looted works to the grandchildren of the original owners. The restitution coincided with the French premiere of the George Clooney movie “Monuments Men,” about GIs working to recover looted art.

“Hollande has opened the doors and that’s great,” Soltes said. “But there is other stuff, French decorative arts — tables, chairs, Louis XIV,

XV, XVI owned by Jewish families. The French have stonewalled on them. You can see how interestingly self-contradictory this whole effort can be.”

The tag MNR means nothing to most people, he said, and someone visiting a French art gallery would likely have no idea that the painting they are enjoying was stolen from a Jewish family seven decades ago. Likewise, a descendent of that family would have no tipoff that the work, with its MNR tag, might have been the painting that hung in the parlor before the war.