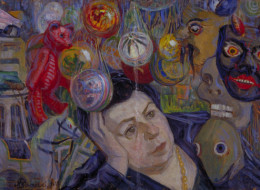 With Clooney's Monuments Men film now viewed by many audiences, and the revelations of the Gurlitt trove of art in Germany, there has been a lot of publicity about the lost and looted art of the Second World War. While much of the recent interest in looted art seems centered around the astronomical value of famous artworks both lost and found, there are much greater numbers of lesser known pieces that vanished during the war, and each has a tale to tell. I have a very personal interest in these lesser known stories, because for more than a decade, I have been dedicated to finding works painted by my great-grandfather, Moshe Rynecki, who perished in Majdanek.

While Moshe perished in the Holocaust, incredibly, my grandparents and father (who was eight when the war ended) survived the war. And thanks to Moshe's foresight, the surviving family's determination, and an incredible stroke of good luck, my family was able to recover a small portion of his art. That any of Moshe's art survived the massive devastation on Warsaw through the course of the Nazi invasion, uprisings by the Jews and Poles, and the subsequent Soviet occupation, is astounding. That my relatives managed to find it (and each other) in the chaos after the war ended is even more astonishing. So, although I never met my great-grandfather ("Bride and Self Portrait," 1918 below), I feel as though I did because I literally grew up surrounded by his paintings, featured proudly on the walls of my parents' and grandparents' homes.

But in order to tell this story properly, I need to take several steps back and start at the beginning. My great-grandfather started out life as the son of a tailor in Siedlce, a small town east of Warsaw. He was a student, and while he loved to draw and paint, he did not receive much mentoring or encouragement. His father made sure he finished both his Jewish education at a Yeshiva, as well as a more traditional education at a Russian middle school. Eventually Moshe was allowed to attend the Warsaw Academy of Art, but only for a short time period; his father just didn't see how his son could make a living painting pictures. To discourage his son from pursuing an art career, he married him off to Perla Mittelsbach(in the portrait below), a woman from a family of some means. Together they operated an art supply store selling paint supplies, writing materials and books for artists and students. 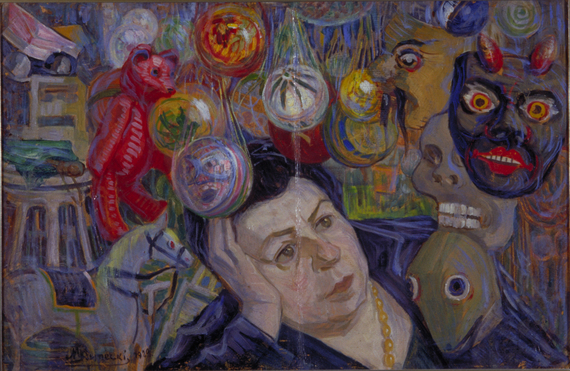 Moshe, for his part, never wanted to give up painting and, considering his culture and the times he lived in, he was very fortunate to be able to continue to paint. Perla supported, or at least accepted, the fact that her husband was primarily interested in painting. And so while Perla tended to the store and its customers, Moshe took his keen eye, sketchbook and paints into the world to record what he saw. His paintings reveal a painter whose real skill was visual narration, with a keen eye for exploring and documenting the daily rhythm of life. He painted artisans and laborers, study and worship in the Synagogue and moments of leisure. He was modestly successful, exhibiting consistently in the 1920s and 1930s in Warsaw. His works were featured in Jewish art salons, the Jewish Society for the Promotion of Fine Arts and at the Warsaw Art Academy. 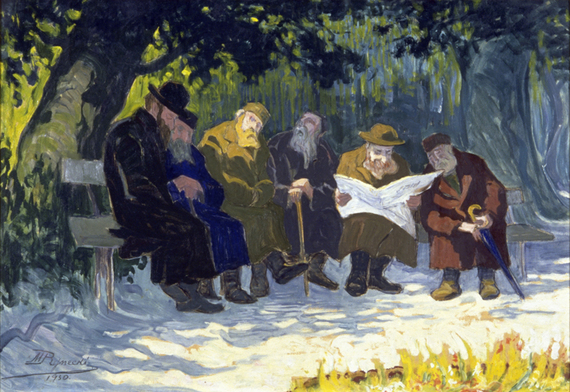 Moshe was also prolific: By my grandpa George's account, Moshe had produced roughly 800 paintings and some sculptures by 1939. In September, when the Nazis invaded, my great-grandfather became concerned that his life's work would be destroyed. In an effort to safeguard his art, he divided it into bundles and distributed the work to trusted friends in and around the city of Warsaw. He gave lists of the hiding places to his wife, son and daughter, hoping that eventually his oeuvre would once again be whole.

Unfortunately, it was not to be. While his son George begged him to stay outside the Warsaw Ghetto and hide, Moshe willingly went into the Ghetto to "be with his people," and was eventually deported to Majdanek where he perished. My father and his parents miraculously survived the Second World War living in Warsaw with fake papers. They paid bribes, bought and sold goods on the black market and had their fair share of close calls. In fact, my grandpa George spent the last year of the war in a prison, and was being marched to a death camp when he was liberated by American soldiers. Moshe's wife, Perla, survived the war, as did a few cousins. But Moshe's daughter, as well as most of my father's family, did not.

Although the war had left the vast majority of Warsaw in rubble, Perla returned with a cousin to search for the hidden bundles of art. Her husband, her store and the world she knew were all gone, but she hoped to be able to at least retrieve Moshe's legacy. She believed the paintings would tell the story of a community that once thrived in Poland, acting as a testament to her husband's passion for art, to the Jewish people and culture, and a way of life that once flourished. Perla found only a single bundle in the basement of a home across the river Vistula, just over 100 pieces. Many were relatively pristine; others were ripped, torn and stepped upon. She bundled up the surviving works and took them to her son (my grandpa George) who, by that point, was living in Italy awaiting permission from the United States government to emigrate and start his life anew. 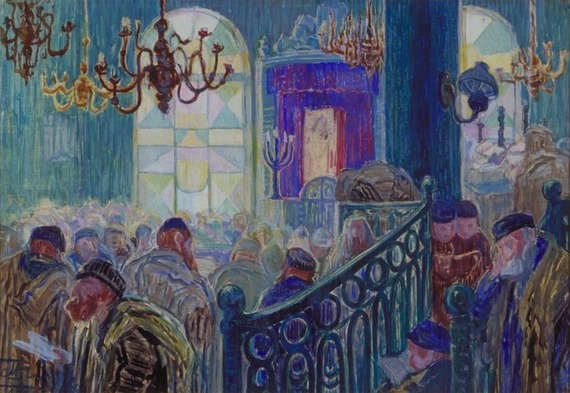 George later wrote in his memoir that these were the only pieces that survived. For many years my father and I thought the same, but ultimately, and to our great joy, we discovered that we were wrong. In 2000 we learned the Jewish Historical Institute in Warsaw has 52 of my great-grandfather's pieces. In the years since we have learned of several collectors with his works, and of the survival of at least one other bundle purchased by Polish partisans after the war. As a result of the sheer number of discoveries, I believe there must be more of his work out there -- pieces in attics, basements or simply hanging in people's homes.

Today, I am an heir to this story, this legacy and the paintings. My great grandfather saw his role as documenting the world around him; I see mine as uncovering and sharing a world that was lost. So first I shared the works I had; with my father's support, I built a website featuring Moshe's paintings. This led to a watershed moment, when we were contacted in 2002 by Yad Vashem whose curator, Yehudit Shendar, requested we donate a piece to the Israeli museum. Although it was difficult to part with a piece, we felt it was both an honor to Moshe and a way of sharing with the many visitors to the museum.

Ultimately, culture belongs to all of us. In the Monuments Men film, Clooney's character says: "If you destroy an entire generation of a people's culture it's as if they never existed. That's what Hitler wants and it's the one thing we can't allow." My family is doing its best to preserve the memory of the Polish Jewish culture portrayed in my great-grandfather's works. We share the art we have on our website, on social media and in talks at universities and museums. I am working on both a book and a documentary film about Moshe's art, and my quest to find the lost and missing pieces.

For me, each painting is an actual, physical link to the past. Each brush stroke is an extension of my great-grandfather; of who he was and of the time and place of his life. I know the collection will never be whole again, but I feel compelled to search for the surviving paintings. I keep thinking that if I find enough of them; if I learn enough of their stories and the stories of the people whose lives they have touched, I will understand. Understand the fragments of a vanished culture the paintings portray, and in them, find the echoes of my great-grandfather.