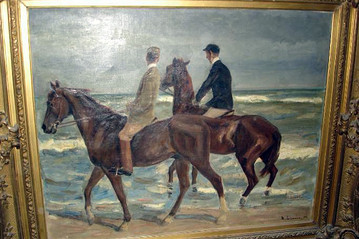 “Two Riders At The Beach” by Max Liebermann on November 18, 2013 in Berlin, Germany.

David Toren has become the first American to file a lawsuit against Germany for the return of artwork in the case surrounding Mr. Gurlitt, Mr. Toren’s Washington-based lawyer said Wednesday. Mr. Toren, an 88-year-old retired lawyer from New York, is seeking the return of the Max Liebermann painting, “Two Riders on the Beach,” plus any other works belonging to his family that the Gurlitt trove might hold.

“I lost my patience,” Mr. Toren said. “So I said, I’m spending some money and I’m going to sue them.”

The painting was one of the first made public late last year from the stash of more than 1,400 artworks found in a Munich apartment connected to the late art dealer’s elderly son, Cornelius Gurlitt. The oil on canvas belonged to Mr. Toren’s great uncle, David Friedmann, whose art collection in Breslau, Germany was targeted for seizure by the Nazis. “Two Riders on the Beach,” a 1901 Impressionist painting by a German-Jewish artist featuring two men astride chocolate-colored steeds, had been missing since the start of World War II.

When news of the art trove came to light in November, Mr. Toren was one of the first to file a claim with German authorities. But he said in that time there has been little action. The provenance of “Two Riders on the Beach” appears to be more straightforward than for other suspected Nazi-looted art: Mr. Friedmann is listed as the last-known owner of the Liebermann painting on Lostart.de, a German government website that now offers details on 458 artworks in the Gurlitt collection. A website recently created by Cornelius Gurlitt lists “Two Riders” as one of four works that Mr. Gurlitt is having “exploratory talks” about regarding their possible return to claimants.

On Wednesday, August J. Matteis, Jr., a lawyer at Weisbrod Matteis & Copley, the same firm where Mr. Toren’s son is a partner, brought the complaint using a federal law that allows Americans to sue foreign countries.

The filing in U.S. district court in Washington against the federal republic of Germany and the free state of Bavaria claims that the German government is holding onto property it doesn’t own and directs German authorities to return the Liebermann canvas to Mr. Toren and pay unspecified damages.

Mr. Toren said that when he was 14 years old, he escaped to Sweden with other children in a kinder transport rescue that left Germany a week before the war broke out in 1939. Both his parents died at Auschwitz, he said. Mr. Toren, who went blind six years ago after contracting shingles, said he would not want the painting for his New York City home. He might sell it or give it to other family members as an heirloom. But first, he wants the chance to share the painting with his 92-year-old brother. “He gets one horse,” he said, “and I get the other.”