OU should return the painting, not withhold it

April
Oklahoma Daily 19 February 2014
From the Editorial Board 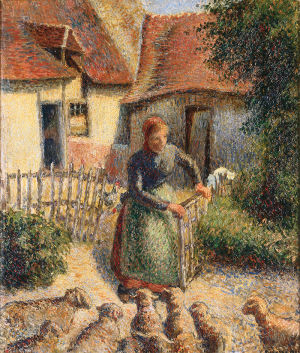 "Shepherdess Bringing in the Sheep" is on display in the Fred Jones Art Museum. The painting was stolen by Nazis during World War II and the university is currently being sued to return the painting to its original owners.

When we talk about the recent revelation that OU owns a painting that was stolen from a French family by the Nazis, we are not just talking about a piece of art. We are talking about a world war, two families touched by it and the reputation of our university.

OU will not return the painting to Léone Meyer, whose father owned the painting prior to WWII, until its fate is decided in court, OU President David Boren said in a Feb. 12 statement. Returning the painting without confirmation from a court could “set a bad precedent,” and the university should not give away donations without settling the issue legally, Boren said.

We understand Boren’s point and agree that, in most cases, leaving complicated issues — like the ownership of a previously unknown Matisse painting discovered by authorities in Germany — up to the courts is the wisest decision. However, the painting is not like most issues. It is a gray area that concerns the past sufferings of the Meyer family during WWII. OU should return the painting to Meyer immediately because it is the ethical thing to do. Making Meyer wait even longer to receive her deceased father’s property is not worth the formality of a legal decision.

We guess that Camille Pissarro, the artist who created the painting “Shepherdess Bringing in the Sheep” in 1886, never would have guessed how much intrigue the painting would cause 128 years later.

OU acquired the painting as part of a donation from the Weitzenhoffer family, and it hangs in the Fred Jones Jr. Museum of Art today. Prior to WWII, Jewish French businessman and art collector Raoul Meyer owned the painting, the Daily reported. His daughter, Léone Meyer, explained in a Feb. 11 open letter that she is on a quest to recover her father’s paintings that were stolen by the Nazis in WWII.

Meyer’s efforts to re-acquire the paintings include a May 2013 lawsuit filed against OU to return the Pissarro painting. Meyer’s letter and OU’s ownership of the property have gathered widespread attention, including a bill filed by an Oklahoma legislator to effectively force OU to return the painting.

While we do believe OU should return the painting, we do not agree that it is worth the Oklahoma legislature’s time to consider such a bill when Boren has already said the university will return the painting should the court rule in Meyer’s favor.

OU will not just return the painting to Meyer due to “a previous court ruling in Switzerland that denied the family's claim based on its timing,” according to a NewsOK article.

We understand that OU wants to go through the appropriate channels before it starts handing out donated artworks. But this painting tells the history of a family persecuted and murdered by the Nazis, and OU should want nothing to do with withholding stolen property. Strictly and unwaveringly following the rules isn’t always the right thing to do. After all, the Nazi soldiers who took Meyer’s painting in the first place were likely following orders. OU should bend the rules, just this once, and do the ethical thing — the right thing — which is to return the painting to Meyer as soon as possible.