Not All Monuments Men Were Men 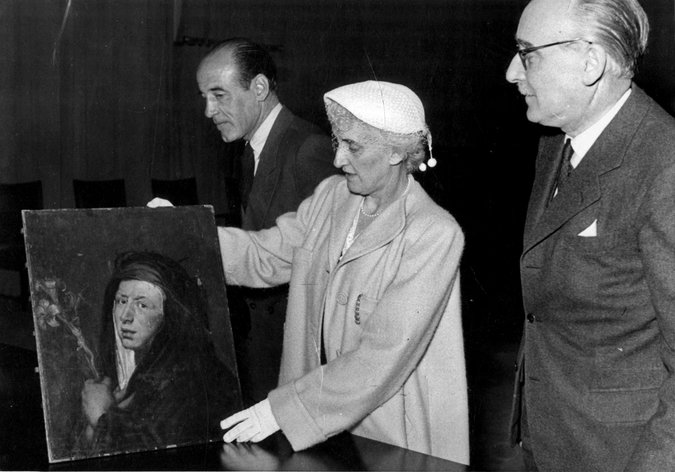 Ardelia Ripley Hall returning a portrait of St. Catherine by Rubens to Germany in 1952. Smith College

In February 1952, as Europe rebuilt after World War II, Ardelia Ripley Hall arrived in Bonn, Germany, to play her part in a bold American military mission that had begun about a decade earlier.

Ms. Hall was no soldier. She was a petite, white-gloved scholar working for the State Department and bearing a 350-year-old gift, a portrait of St. Catherine by Rubens that had gone missing from a Düsseldorf museum during the war.

In her mannerly and determined way, Ms. Hall was completing the work of an Army team patched together in 1943 and charged with chasing down millions of cultural treasures plundered by the Nazis.

The team members, initially 30 men who were largely civilian art experts, crisscrossed Europe, often alone and under fire, chasing after fabled works from great museums, gold and silver heirlooms from Holocaust victims, even brass and iron bells from ancient church towers. Among the masterpieces they rescued were the Ghent Altarpiece (1432), the Madonna of Bruges by Michelangelo (1504) and Vermeer’s “The Astronomer” (1668), all intended for a colossal museum envisioned by Hitler. Their exploits were chronicled in a 2009 book by Robert M. Edsel, “The Monuments Men,” which has now been adapted into a movie by that name, due out on Friday from George Clooney. 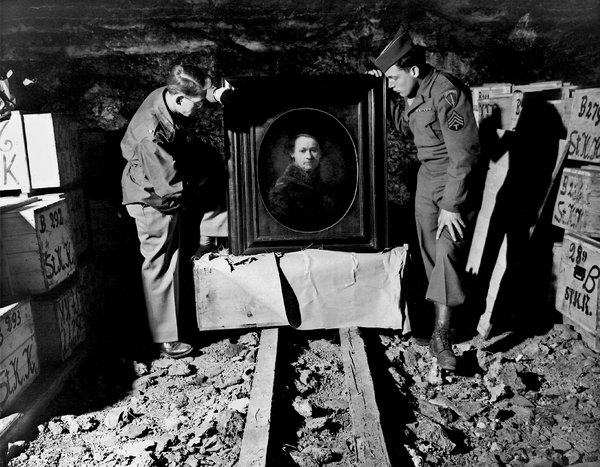 A Rembrandt self-portrait recovered at a German salt mine that had been used as a storehouse, with Harry L. Ettlinger, right. Monuments Men Foundation

Less heralded have been the contributions of women like Ms. Hall, who were pivotal in helping rescue Europe’s art during the war and long after the German surrender.

The art-hunting team, officially known as the Monuments, Fine Arts and Archives Section, grew to more than 300 people in the postwar years. The women never numbered more than a few dozen, but, like the men, they were dedicated scholars and at times notable heroes.

Rose Valland, whose role is depicted briefly by Cate Blanchett in the film, was a French Resistance operative who spied on the Nazis and showed herself able to shoot and drink with the boys. Edith A. Standen was a captain in the Women’s Army Corps who went on to a career at the Metropolitan Museum of Art. And Ms. Hall was a Smith College graduate who came to the task from a career focused on the study of Asian art.

“The work done by these women is extraordinary, especially after the war,” said Victoria Reed, the curator of provenance at the Museum of Fine Arts, Boston, where Ms. Hall worked before the war. “The movie is overdue in terms of honoring the men, but we shouldn’t overlook women like Ardelia.”

One of the Monuments women survives, Anne Olivier Popham Bell, of Sussex, England, a 97-year-old Virginia Woolf scholar who handled logistics for the team in Germany. In a telephone interview, she spoke of the “enormous amounts of damaged works to be cared for,” among them thousands of medieval church bells seized by the Nazis that were to be melted into armaments. 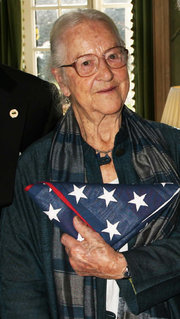 Of course, sorting through so many bells, many of them unmarked, was no easy task.

“These pastors would arrive and say ‘Can I have my bell back?’ ” she recalled. “It seemed rather absurd. We decided to let them organize how it was to be done.”

By 1945, the Monuments section, operating in Italy, Belgium, the Netherlands, France and Germany, consisted of curators, scholars and architects, some of them hurried into battle zones with little military training, as well as a few G.I.s. They found underground chambers where fleeing Nazis hid tens of thousands of paintings and sculptures, and they prevented the advancing Allies from bombing ancient monasteries. After months of detective work aided by Ms. Valland, they found a castle in Bavaria where thousands of stolen works once warehoused by the Nazis in the Jeu de Paume museum in Paris had been hidden.

Before Germany had surrendered, two members of the section were killed near the front lines. After the war, the teams set up collection points where they sought to undo, artwork by artwork, the catastrophic pillaging by the Nazis. As the movie depicts, it took Germany but a few years to convert the art treasures of Europe into a cultural diaspora. It took decades of postwar legwork, much of it by the Monuments women, to restore order.

“Our attitude was that we were not there to take spoils of war but to give them back,” said Harry L. Ettlinger, 88, of Rockaway, N.J., who worked as a driver and translator. A German-born Jewish refugee, Mr. Ettlinger, then 19, helped empty salt mines in Germany of thousands of paintings hoarded during the war. 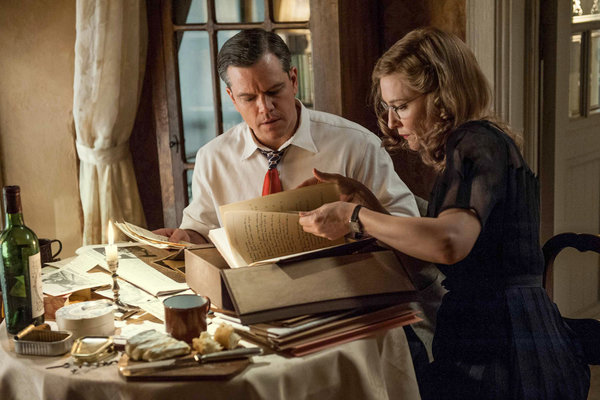 Others in the team were art restorers recruited when it became obvious that the Allies, in freeing Europe, risked laying waste to its rich cultural landscapes. James J. Rorimer, a 40-year-old medieval art expert who served as an officer in France and Germany, for example, later became director of the Metropolitan Museum of Art.

These efforts have been laid out in academic papers and books like “The Rape of Europa” (Vintage, 1994), by Lynn H. Nicholas, which was made into an award-winning documentary in 2006. Mr. Edsel, who formed the Monuments Men Foundation while writing his book so he could collect information about the recovery of World War II art, said he and the filmmakers hope the movie will generate leads on long-missing masterpieces by Raphael, Monet and Rodin.

On his website, Mr. Edsel acknowledges the women who oversaw the “vital but often thankless task of providing logistics for the men in the war zones,” and worked to return war booty long after the Allies had departed.

Of Rose Valland, Mr. Edsel, said, “There were many times when she could easily have been shot.”

She risked her life daily, spying on Nazi officers as they emptied the Jeu de Paume on behalf of Goering and Hitler. Posing as an unassuming assistant who spoke no German, she listened in on their chatter, passed information to the Resistance and kept a ledger of the thefts that was vital to their recovery. 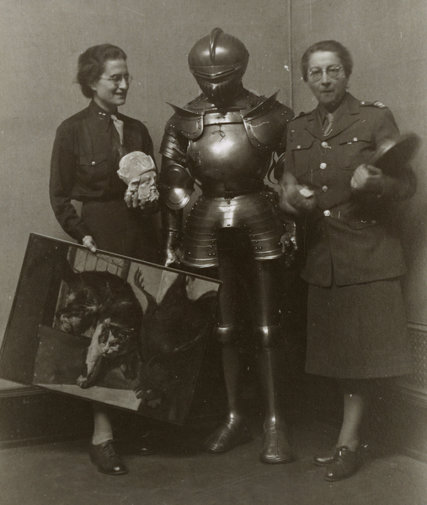 Ms. Hall’s help was more academic in nature, Ms. Reed said, but no less important. She became the driving force at the State Department for postwar restitution between 1946 and 1962. The 30 boxes of material dealing with war-related looting and recovery, kept at the National Archives in Washington, are named the Ardelia Hall Collection in her honor.

The story of how Ms. Hall, who died in 1979, returned Rubens’s “St. Catherine” highlights her painstaking work and the unpleasant fact that some of the art left Europe with American servicemen.

The Rubens was one of many works that arrived at an Army collection center in Wiesbaden, only to go missing, according to archives from the period. It surfaced in Los Angeles in 1950, when it was brought to a museum official for evaluation. Ms. Hall, alerted by the official who recognized the work on a list of missing items that she had created, used the force of law to ensure it was surrendered for return.

Ms. Standen, the Women’s Army Corps captain, described Ms. Hall in an article in the 1960s as “the dominant force” in the return of the art long after the mission became an unglamorous sidelight. In her career, Ms. Standen wrote, Ms. Hall alone oversaw the return of 1,300 items, including a Monet that went back to the Rothschild family in Paris.

Ms. Standen, who died in 1998, went on to become the curator of textiles at the Met from 1949 to 1970 and was herself relentless about safeguarding and repatriating stolen works. She was the officer in charge of the Wiesbaden Collecting Point in Germany until August 1947, overseeing a depot that was heavily policed and included weatherproofed storage and restoration areas.

In her papers, she described mounds of museum objects that turned up at the depot, including paintings by Dürer and Klee, and medieval armor, picks and axes. Ms. Standen, who befriended Ms. Valland while in Germany, shrugged off some of the plaudits she received in favor of praising those on the front lines. She described her role as being like that of “a dwarf standing on the shoulders of giants.”

One of those giants was, of course, Ms. Valland, who, as the movie depicts, kept her cool in the presence of a thieving Hermann Goering. She donned a captain’s uniform from 1945 to 1952 to chase after what the Nazis stole. While Goering awaited the judgment of Nuremberg, Ms. Valland stood at his former estate in Germany overseeing the recovery of thousands of museum pieces, including two massive, rose granite lions that had been taken from the Louvre.

“Most of these heroes,” Mr. Edsel said, “were civilians who risked everything in the cause of art.”