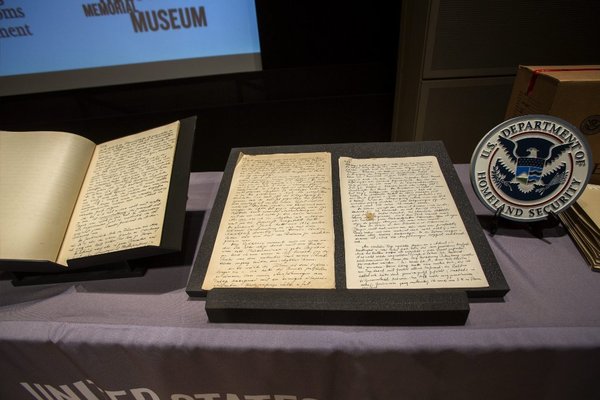 Pages from the diaries of Alfred Rosenberg on display at the U.S. Holocaust Memorial Museum in Washington. (Jim Lo Scalzo / EPA / December 18, 2013)

The United States Holocaust Memorial Museum has posted online pages from the diaries of Alfred Rosenberg, a key member of the Nazi party and a top aide to Adolf Hitler. The Washington museum said that it formally acquired the diary on Tuesday after more than a decade trying to find it.

In an official announcement, the museum said that the Rosenberg diary was recovered earlier this year by Homeland Security officials, following an "extensive investigation." The diary, which had played a role in the Nuremberg trials and went missing for decades, has long fascinated World War II and Holocaust historians.

Though some pages of the diary are already in the National Archives in Washington, the bulk of the diary had mysteriously vanished following the Nuremberg trials. The museum helped to lead an investigation that discovered that the missing pages had come to the U.S. in the hands of Robert Kempner, a prosecutor at Nuremberg.

A search of Kempner's belongings failed to yield the diary pages, but they were eventually located in upstate New York, in the possession of a former professor who had been associated with the late Kempner.

Digital scans from the diary are viewable on the museum's official website, along with German-language transcriptions of the text.

"The Rosenberg diary will add to our understanding of the ideas that animated the extremist ideology of Nazism," said museum director Sara J. Bloomfield in a statement. The museum said that its transcript comprises the German text of Rosenberg’s diary entries from 1936 to 1944. It doesn't include his entries from 1934 to 1935, which are held at the National Archives.

The diary played an important role during the Nuremberg trials, where Rosenberg was convicted of various war crimes and was executed by hanging in 1946.