Who is the recluse behind the Nazi art haul?

German of the Week
Who is the reclusive 80-year-old behind the huge trove of Nazi-confiscated art found in a Munich flat? The Local takes a closer look at Cornelius Gurlitt as our German of the week. 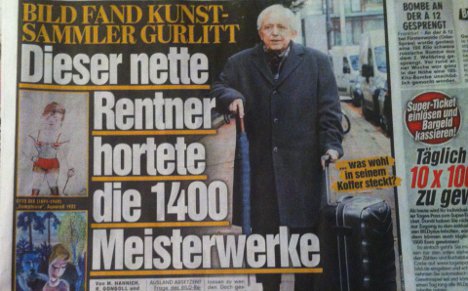 Gurlitt was spotted leaving his Munich home apparently on the way to the airport, Bild newspaper reported.

Gurlitt comes from a family of art-lovers, but his father, who collected paintings on behalf of the Nazis, was declared a "second degree hybrid" by the Third Reich for having a paternal Jewish grandmother.

Cornelius lived alone, dressed well and kept to himself, according to German media reports.

He spent most of his time in his modest apartment in the well-to-do Schwabing area of Munich surrounded by hundreds of legendary works of art acquired by his art dealer father in the 1930s and 1940s.

Gurlitt did not work, marry or have children and apparently sustained himself by occasionally selling a painting. His life continued like this for many years.

Even his family did not have much contact with him and for a time he was only in contact with his late sister Benita through letters, according to Der Spiegel.

His brother-in-law Nikolaus Frässlehanded in 22 artworks from his flat near Stuttgart to police on Saturday.

Gurlitt, who was last seen getting into a taxi outside his apartment on Tuesday, has left few traces behind.

What is known, according to Der Spiegel, is that he and Benita attended Odenwaldschule, a private boarding school in rural southern Germany between 1946 and 1948.

Afterwards, Gurlitt apparently took a course in art restoration. There are no reports of his movements in the years that followed.

In 1960 however, he acquired a small house in Salzburg and two years later his sister described him in a letter as living the life of solitary painter "happy and contented in Salzburg."

That 90 square-metre house has since become the focus of media scrutiny amid speculation that yet more paintings may have been stashed there.

Freelance journalist Josie le Blond, who visited the Salzburg home, said: "The house was boarded up and partially derelict, it didn't look like anyone had been living there in decades.

“The garden was overgrown and the neighbours had barely ever seen Gurlitt, maybe just once or twice over the years.

“Given the sheer size of the hoard found in Gurlitt's flat in Munich, I'd be very surprised if he wasn't also using this house as a storage depot for more lost masterpieces."

A family of art-lovers

Art was in Gurlitt's blood. Research by journalists at Der Spiegel revealed that his paternal grandfather was a professor of art history at Dresden University, his uncle was a music academic and his first cousin once removed ran an Avantgarde gallery in Berlin.

But his father, Hildebrand Gurlitt, from whom Cornelius inherited the treasures, was the family member who most distinguished himself in the world of art.

Born in Dresden at the end of the nineteenth century, he fought in the First World War, during which time he developed a friendship with the painter Karl Schmidt-Rottluff.

In the years that followed, he studied art history and in 1925 he became director of the König Albert museum in Zwickau, notably showcasing the work of expressionist painters and organizing events attended by Russian avant-garde artist Wassily Kandinksy.

But the Nazis considered avant-garde art "degenerate." Gurlitt's  progressive tastes got him sacked in 1930, much to the approval of the Militant League for German Culture,  an anti-Semitic political group which lauded his dismissal as a triumph over the "culture of the sub-humanity of Kollwitz, Zille and Barlach."

He moved to Hamburg where he became head of the Kunstverein art society, an institution he led according to his own principles rather than Nazi ideologies.

But writing in the Hamburger Tageblatt newspaper, a man named Dr Wall accused him of the "Jewification of the art establishment." In 1933, he was dismissed once again on Nazi orders. In the same year, his son Cornelius was born.

Despite initially being persecuted by the Nazis, who labeled him as a "second-degree hybrid" because of his Jewish connections, for the next decade Gurlitt managed to maintain a high-profile in the art world.

Then, in a rather extraordinary move, he was asked in 1943 to take responsibility for creating an art collection for none other than Adolf Hitler. It was in this capacity that he gathered the vast collection of art which fell into the hands of his reclusive son after his death in a car crash.

For decades, Cornelius Gurlitt managed to house his father's enormous and priceless art collection without attracting attention. But the first sign that his quiet life might soon come to an end was in 2010, when he was stopped by customs officials while travelling on a train from Zürich to Munich.

Gurlitt was caught carrying €9,000 which he claimed came from the sale of a painting to Swiss gallery owner Bernhard Kornfeld. But according to Der Spiegel, Kornfeld claims he last saw Gurlitt more than twenty years ago.

In 2011, the pensioner came to attention again when the Cologne-based Lempertz auction house put a painting by Max Beckmann up for sale on Gurlitt's behalf.

It was sold for €725,000, with the pensioner receiving 60 percent of the sale. The rest went to the family of Jewish art dealer Alfred Flechtheim, who ran a gallery dedicated to the painter in the 1920's.

The same year, authorities began investigating Gurlitt on charges of tax fraud and it was then that the decision was taken to carry out a search of his flat.

The flat was filled with rubbish, empty food tins and stuffy rooms, according to a witness quoted by AFP.   "It was clear he was a pack rat - there were 50 bags from Ludwig Beck [a department store]. The blinds were pulled down and the only window bringing in light was in the kitchen," she said.

"It was an apartment furnished normally with a kitchen, a sitting room, a bedroom and a third room," the woman said. The paintings were apparently stored on hand-built shelves behind a curtain in the third room.

Even since the remarkable find became public, sightings of Cornelius Gurlitt have been few and far between. Paris Match magazine snapped photographs of him buying bread at his local supermarket and on Tuesday he was reportedly seen heading to the airport.

The only communication to come from Cornelius Gurlitt in recent days was a typewritten letter to Der Spiegel magazine on November 4th which contained the explicit plea not to mention the name Gurlitt in the publication.

The octogenarian recluse had apparently confused the publication with its rival Focus, which broke the story.

Meanwhile the origin of the paintings are being investigated by a taskforce based in Augsburg. Gurlitt says he has handed all the paintings to prosecutors and has said he will give a written statement about his involvement in the controversy as the probe continues.