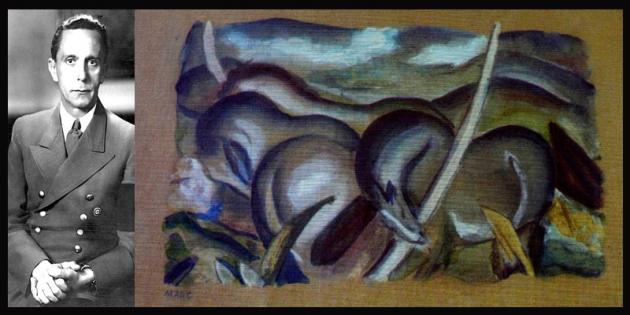 It has now been revealed that Hitler's propaganda minister Joseph Goebbels sold 200 masterpieces to the art dealer Hildebrand Gurlitt the father of the man involved in the discovery of hundereds of Nazi era missing art works. It was recently announced that these works are available to view online at http://www.lostart.de . The transaction for 4,000 Swiss francs recorded Gurlitt as living in Hamburg at the time of the sale. The property transfer took place once the Propaganda Ministry’s bank had confirmed receipt of payment.  The purchase contract states, Gurlitt bought a further 115 works of “degenerate” art from Goebbels’ ministry in 1941, according to the Bild newspaper. At some point during World War II, the Gurlitt family moved to Dresden then to Bavaria as the war ended. The art dealer was interrogated by the Allies, but due to his Jewish heritage the collection, declared as only a few hundred works was returned to the family.

On Saturday German authorities confiscated 22 paintings from the home of Gurlitt's brother-in-law Nikolaus Fraessle near Stuttgart, Bild  said, Fraessle had called police himself to hand the art works over. The family stated that they surrendered them for their own safety as they were uninsured.

A list published by Bild of 200 works in frames, which made up a proportion of the significant cache of paintings that Goebbels had sold to Hildebrand Gurlitt included 44 by Ernst Ludwig Kirchner, 23 by Emil Nolde, 15 by Otto Dix, eight each by Oskar Kokoschka and Georg Grosz, seven by August Macke, four Picassos, three Chagalls, two Gauguins

The outcry from the international art community calling for the German Government not to drag their feet in this case has been universally endorsed by several leading Jewish organisations. The German government stated on Monday it "plans to speed up research into the rightful ownership of recently unearthed artworks looted by the Nazis, amid mounting calls for a full online list". Federal and regional authorities involved in resolving restitution for the on the huge trove of artworks held talks on Friday.

A German government's spokesman said; "Representatives from the culture and finance ministries and the southern state of Bavaria agreed they "want to advance considerably faster the research into the origins of the artworks from this collection", Steffen Seibert added; "We want that works with an unclear history of acquisition... in consideration of the legal aspects of the ongoing investigation process, are immediately published," he said. "We will announce further details on the procedure this week."http://www.artlyst.com/articles/hitlers-joseph-goebbels-sold-degenerate-art-trove-found-in-munich
© website copyright Central Registry 2022