One of the world’s most famous artworks, Klimt's "Beethoven Frieze," is caught in the middle of a fierce restitution claim. Heirs to the original owner claim the state handled unethically in the initial sale. 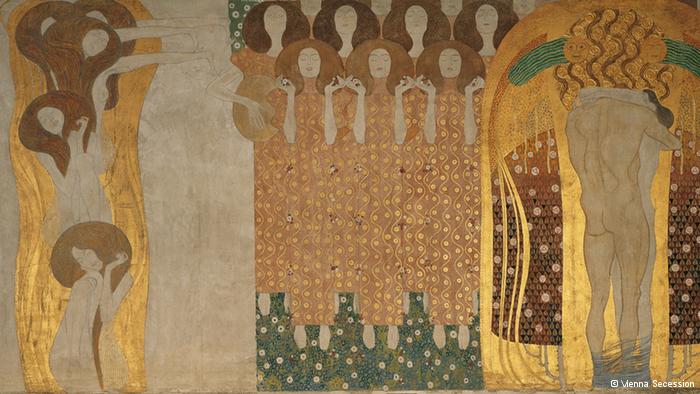 Prices on Gustav Klimt's works have rocketed into territory once occupied only by Picasso and Cézanne. Now there's a chance his grandest work, the "Beethoven Frieze," completed in 1902 as part of a tribute to the composer, could also end up on the auction block.

Painted directly onto the walls of the Secession building in Vienna where it is now on display, it is one of the city's major cultural attractions. Criticized in the early 20th century for its strong eroticism, the Frieze covers three walls with richly decorated images. Floating female figures symbolize human yearning for happiness, while dark forces of lasciviousness, wantonness and intemperance are to be overcome before salvation - which Klimt was convinced could only come through art.

"When you consider that Klimt's 'Golden Adele' is worth 150 million [euros], then I estimate that the Beethoven Frieze would be worth not less than 200 million euros ($270 million)," art expert and former head of the Vienna auction house "im Kinsky” Otto Hans Ressler told DW.

The 'Golden Adele' he refers to is Klimt's Portrait of Adele Bloch-Bauer, which sold for $135 million dollars in 2006. In today's value, it would be worth around $150 million.

The accuracy of Ressler's estimate might soon be tested as heirs of Erich Lederer, who sold the Frieze to the Austrian state in 1973, have filed a claim for its restitution with the culture ministry in Vienna.

Lederer was a patron of the arts who, like many Jews in the 1930s, was forced to flee the approaching Holocaust and found refuge in Switzerland. After the war, Austria said he could have the "Beethoven Frieze" back, but then imposed an export ban on it. 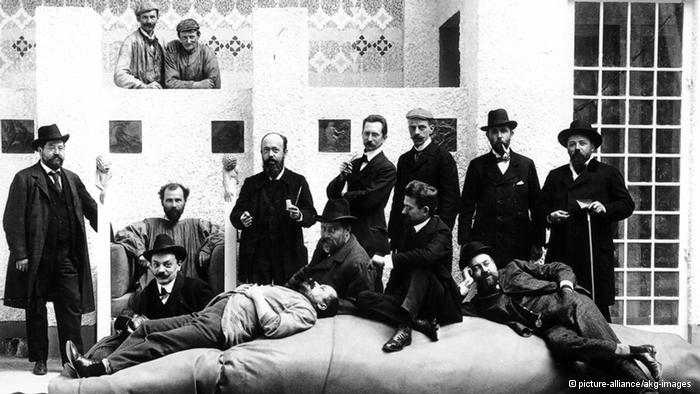 "Nobody could bid internationally because there was an export ban, so there was only the domestic market and the state could grab it at a very cheap price," said Georg Graf, a lawyer and restitution expert who is advising the claimants.

Erich Lederer eventually sold the Frieze for $750,000. An estimate at the time said that was about half of its value. Lawyers representing some of the heirs paint a picture of Lederer as a man in despair who felt hunted even after the Holocaust.

Robert Jan Van Pelt, a Holocaust expert from the University of Waterloo in Toronto is also advising the heirs of Erich Lederer and said their claim hinges on the circumstances of the sale. Speaking to journalists in Vienna, he said Lederer was forced into negotiation with the government and then "ultimately sells the painting in what, from my perspective, is still a forced sale."

Lawyers for the heirs say their research has uncovered new documents showing the Austrian state pressured Lederer into the sale by threatening to charge him for storage of the Frieze and for its restoration.

This is the second request for restitution by the descendants of Erich Lederer. A 1999 attempt was rejected, but a change in Austrian law in 2009 allows works purchased by the state to be returned under certain conditions, such as the seller being pressured to sell below market price.


The massive artwork is a major tourist draw in Vienna

Robert Jan Van Pelt thinks the conditions have been met by the new evidence brought forward.

"People from abroad will be looking at this because it is one [case]where I think not only legal history will be made, but also history as such," he said.

The question which many Austrians are asking is what will happen to the Beethoven Frieze if ownership passes from the state to the heirs of Erich Lederer, who now live in many different parts of the world.

Art experts point to inevitable damage if the walls on which it is painted are moved. "It should stay where it is," said Otto Hans Ressler, adding his hope that Austria would re-purchase the work if the restitution claim is successful.

The culture ministry says the artwork will be returned to the heirs if a review by an expert panel created to deal with restitution claims decides that the requirements of the law have been met.

The Association of Visual Artists - Secession, which was founded by Klimt and which today houses and cares for the Beethoven Frieze in the place where it was created, has said it "relies on the premise that [the Frieze] was acquired legally" by the Republic of Austria.

A decision on whether it was is expected around the middle of 2014.