It is almost certainly the biggest trove of missing 20th-century European art discovered since the end of World War II, and the first glimpse of it on Tuesday brought astonishment but also anger and the early stirrings of what will likely be a prolonged battle over who owns the works. 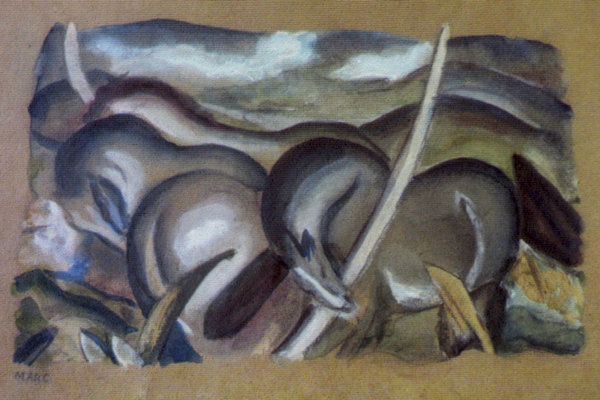 For the first time, German authorities described how they discovered 1,400 or so works during a routine tax investigation, including ones by Matisse, Chagall, Renoir, Toulouse-Lautrec, Picasso and a host of other masters. Some were previously not known to have existed. Others appear to have disappeared around the time the Nazis raided German museums and public collections in the late 1930s to confiscate works they classified as “degenerate.”

Meike Hoffmann, an art historian called in to evaluate the discoveries in the spring of 2012, said she could not believe her eyes, realizing that “we are missing a part of our culture” that the Nazis had tried to destroy and that had now miraculously reappeared.

“These are truly museum-quality works, and you simply do not find these on the market anymore,” she said.

But she and German officials offered only a peek — pictures of a mere handful of the works and a short list of artists — at a packed news conference on Tuesday in Augsburg, an old Bavarian town, leaving many unanswered questions and provoking mounting criticism of officials’ slow and perhaps overly discreet handling of the trove.

Fully aware that the discovery is bound to set off a storm of claims — already being mobilized — officials in Augsburg would not release a complete inventory of what they know so far about their discovery, citing privacy rights and concerns that tracing the provenance of the works will be a costly labor that could take years. Officials would not say where the works are stored. They would not even confirm the name of the man who is believed to have kept the art hidden for decades in his Munich apartment. Nor, they said, do they know where that man is now.

The discovery of the works was first reported by Focus magazine on Sunday. They were thought to have been found in the apartment of Cornelius Gurlitt, 79 or 80, the son of Hildebrand Gurlitt, who was stripped of two museum posts by the Nazis after it was determined that he had a Jewish grandparent. Nonetheless, the elder Mr. Gurlitt later became one of the few art dealers selected by Joseph Goebbels to sell to buyers abroad the Modernist works banned by the Nazis.

Some of the works seized in the apartment appear to resemble the titles of works that were in the custody of American and German investigators sent to safeguard cultural treasures in the late 1940s, said Marc Masurovsky, founder of the Holocaust Art Research Project. In 1950 that unit ultimately returned 115 works to the elder Mr. Gurlitt because he convinced the unit that the works were not illegally acquired, said Mr. Masurovsky, whose organization recently joined with the Paris-based dealer and restitutions expert Elizabeth Royer. For example, American cultural advisers returned “Self-Portrait,” by Otto Dix, and “Lion Tamer,” by Max Beckmann, both names of works that have been identified as being in Mr. Gurlitt’s possession.

The heirs of Jewish and other German collectors whose missing artworks may be among those discovered minced few words, accusing the Germans of failing to live up to the spirit of the 1998 Washington accords on restituting confiscated art or works that sellers were forced to give up for rock-bottom prices in order to flee Nazi Germany.

One of the only former owners to be publicly identified is Paul Rosenberg, a French dealer whose family has spent decades searching for hundreds of confiscated works. His granddaughter Marianne Rosenberg said she was angry that her family members had not been contacted and that they were still unable to get more information about a Matisse that reports have identified as belonging to her grandfather.

“We were aware of the name Gurlitt,” she said. “We are trying to track down things ourselves and fail to understand why the German authorities have said nothing to date.”

Jonathan Petropoulos, a professor of history at Claremont McKenna College in California and the author of “The Faustian Bargain: The Art World in Nazi Germany,” called the trove “the most important discovery of Nazi-looted art since the Allies discovered the hordes in the salt mines and the castles.” The only comparable revelation in terms of numbers of works that disappeared from Nazi-era Germany was the public display at the Hermitage in 1995 of Impressionist and Post Impressionist works, mostly from private collections, looted by the Red Army at the end of World War II.

Mr. Petropoulos added that one reason the younger Mr. Gurlitt might not have been on the radar of those looking for missing art was that his father died relatively soon after World War II, in a car crash in 1956, and had said that his papers about art transactions had been destroyed.

The son, Cornelius Gurlitt, is assumed to be the man German officials have said was searched by customs officials on Sept. 22, 2010, on a train from Zurich to Munich, and whose conduct, or possessions, prompted suspicion that led the police and customs officials to raid his Munich apartment 17 months later, on Feb. 28, 2012.

There they uncovered 1,258 artworks that were unframed and 121 more framed works, said Reinhard Nemetz, head of the state prosecutors’ office in Augsburg, in whose jurisdiction the initial encounter on the train occurred. It is unclear how many of the works are paintings and how many are drawings, prints and other works on paper.

Evidently stunned by their find, the authorities took three days to pack up the works and take them to a special storage facility. In March 2012, Ms. Hoffmann was summoned to start evaluating the collection, which she said included drawings, lithographs, prints and watercolors.

Many of the works cited by Ms. Hoffman on Tuesday were by German artists of the Expressionist period that is her specialty, including Max Beckmann, Otto Dix, Ernst Ludwig Kirchner and Emil Nolde. A previously unknown Chagall painting and a previously unknown Dix self-portrait, thought to have been painted in 1919, just after his service in battle in World War I, were among the few images of works shown.

The descendants of Alfred Flechtheim, a Jewish gallery owner and dealer forced to flee Germany before dying penniless in London in 1937, called for the results of research done so far to be made public, in keeping with the Washington accords, which stress that speedy release of information can be crucial for aging heirs.

David Rowland, a lawyer representing several families and heirs trying to find and reclaim art, said: “They should publish a photo of each artwork, front and back, and any and all provenance information that they have.”

Ms. Hoffmann said the decision not to disclose a list of the findings was due partly to the difficulty of researching each work, made harder because there are no records to build on. “This was not about keeping something secret,” she said. “We had, of course, to reach a certain level of knowledge about this collection to understand what we had.”

Charles Goldstein, counsel for Commission for Art Recovery, which is based in New York and was founded by Ronald S. Lauder, said his group had heard a few months ago “that a cache had been found,” and that it had belonged to “one of Hitler’s dealers.”

He expressed some understanding for the Germans’ difficulty in proceeding. “They’ve got a hot potato,” he said. “This stuff belongs to Gurlitt, and they have no proof that it’s not his. In order to determine that it’s not his, they have to make a determination that it was stolen or taken from the museums.”

He added that it was not clear that some or even most of the art can be restituted because of the statute of limitations and problems proving ownership.

Focus cited as just one example the case of Henri Hinrichsen, a Leipzig collector who was said to have died in Auschwitz in 1942. His two granddaughters are still looking for the works taken from him, Markus Krischer, one of the two Focus journalists who broke the story, said in a telephone interview.

A copy of a letter, obtained by The Times from the state archives in Berlin, sheds light on the matter. It is a copy of correspondence dated Dec. 5, 1966, sent to Helene Gurlitt, the widow of Hildebrand and mother of Cornelius.

She was asked if she knew anything about the whereabouts of four pictures said to have belonged to Mr. Hinrichsen, by the French artist Camille Pissarro and three German artists. She replied that her husband’s entire collection had been destroyed in the bombing of Dresden in 1945.

“Regarding your inquiry from December 5, 1966, which according to the enclosed envelope was received on January 1, 1967, I can only tell you that all business records and inventories of our company were incinerated on February 13, 1945 — during the major attack on Dresden, where we had moved to from Hamburg.