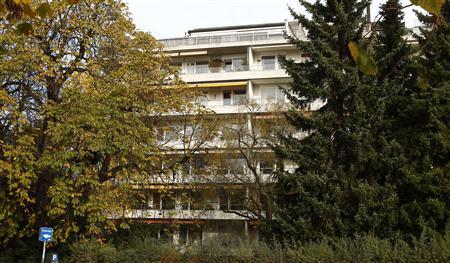 A general view of an apartment building in Munich November 4, 2013, where it is believed that German customs discovered missing artworks. Berlin:

A Jewish group accused Germany on Monday of moral complicity in concealment of stolen paintings after it emerged authorities failed for two years to report discovery of a trove of art seized by the Nazis, including works by Picasso and Matisse.

Customs officials' chance discovery of 1,500 artworks in a Munich flat owned by the reclusive elderly son of a war-time art dealer, was revealed in a report by news magazine Focus over the weekend.

Officials in the southern state of Bavaria declined comment on what could be one of the most significant recoveries of Nazi-looted art. They have called a press conference for Tuesday. German government spokesman Steffen Seibert confirmed the find and said experts were assessing its provenance.

The case poses a legal and moral minefield for authorities. The Nazi regime systematically plundered hundreds of thousands of art works from museums and individuals across Europe. An unknown number of works is still missing, and museums worldwide have held investigations into the origins of their exhibits.

Focus estimated that the works found amongst stacks of hoarded groceries in the flat of Cornelius Gurlitt, could be worth well over 1 billion euros ($1.35 billion). Some, it said, could have been bought by his father Hildebrand from the collections of German state museums. Others were seized, or extorted from persecuted Jewish collectors.

"This case shows the extent of organized art looting which occurred in museums and private collections," said Ruediger Mahlo, of the Conference on Jewish material claims against Germany, noting private collections were almost all Jewish.

"We demand the paintings be returned to their original owners. It cannot be, as in this case, that what amounts morally to the concealment of stolen goods continues."

He criticized the lack of transparency in dealing with the case and said it was typical of the attitude towards looted art, which for some Jewish families constitutes the last personal effects of relatives murdered during the Holocaust.

Germany has faced criticism that the restitution process is too complicated and lacks sufficient funding and has set up research schemes.

The Gurlitt haul is also believed to contain a painting of a woman by Henri Matisse which belonged to Paris-based Jewish art collector Paul Rosenberg.

Focus said Cornelius Gurlitt had funded himself by occasionally selling art works and he had a bank account containing half a million euros. He attracted the suspicion of authorities in late 2010 when they found him travelling from Zurich to Munich with a large, albeit legal, amount of cash.

A search of his flat led them to the sensational find.

Cornelius's father Hildebrand Gurlitt was from 1920 a specialist collector of the modern art of the early 20th century that the Nazis branded as un-German or "degenerate" and removed from show in state museums.

Nazi propaganda minister Joseph Goebbels recruited Gurlitt to sell the "degenerate art" abroad to try to earn cash for the state. Gurlitt bought some for himself and also independently bought art from desperate Jewish dealers forced to sell.

After the war he persuaded the Americans that, as he had a Jewish grandmother, he himself had been persecuted. He continued working as a dealer and died in a traffic accident in 1956.

Auction houses in Berne, Switzerland and Cologne, which sold some of the art works both said Hildebrand was a known dealer.

Karl-Sax Feddersen, a lawyer with Lempertz auctioneers in Cologne, which sold a pastel drawing of a lion tamer by German expressionist Max Beckmann, said, "from our point of view this is a totally normal case. An old gentleman contacted our Munich office and offered them a Beckmann pastel... we had a restitution problem which we actively addressed and we found a solution ahead of the auction."

It turned out the artwork had been bought from a Jewish owner under pressure at the time to sell. After selling for 864,00 euros, Cornelius gave a portion to the heirs of the original owner.

Galerie Kornfeld, an auction house and gallery in the Swiss city of Bern, where Gurlitt auctioned paper works for 38,250 Swiss francs (31,000 euros) in 1990, said in a statement the works were purchased cheaply in 1938 by Hildebrand from a collection of state-owned art.

"Cornelius Gurlitt inherited the works after the death of his mother Helene. Basically this is a case of undeclared inheritance."

The gallery added a clear distinction should be made between looted art and works from the Nazis' former holdings of state-owned so-called "degenerate art" which can be freely traded.