The Klimt row continues: Swedish family are the latest to claim rightful ownership of work exhibited at National Gallery

The unfinished portrait was taken by the Nazis in 1939 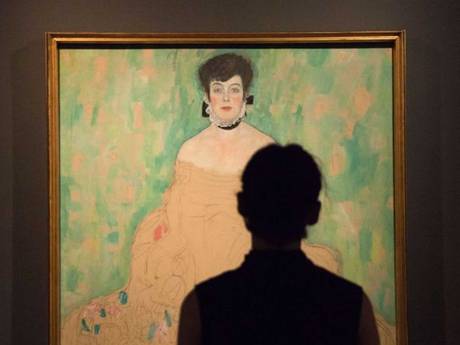 A Swedish family has stepped into the growing international row over the provenance of a Gustav Klimt painting currently being exhibited at the National Gallery in London, and claimed rightful ownership of a work taken by the Nazis in 1939.

Descendants of Amalie Zuckerkandl, whose unfinished portrait is the centrepiece of Facing the Modern: The Portrait in Vienna in 1900, say they should receive the artwork when the exhibition finishes in January. Austria was awarded ownership by an arbitration panel in 2007.

The Swedes' intervention follows a report in last week's IoS that a US-based lawyer, E Randol Schoenberg, was pressing for the unfinished portrait to be returned to the Austrian family that he claims are its rightful owners.

In a letter to the gallery and seen by The Independent on Sunday, Carl Magnus Lilienberg, representing the Müller Hofmanns in Stockholm, writes: "(My clients') Jewish grandmother Hermine Müller Hofmann was the daughter of Amalie Zuckerkandl. Hermine Müller Hofmann owned and possessed the painting [and] was forced to 'sell' it for an unreasonable low price to raise money to escape the Nazis."

Mr Schoenberg dismissed the claim by the Müller-Hofmann family, calling it "as laughable as the decision by the arbitration panel".http://www.independent.co.uk/arts-entertainment/art/news/the-klimt-row-continues-swedish-family-are-the-latest-to-claim-rightful-ownership-of-work-exhibited-at-national-gallery-8906373.html
© website copyright Central Registry 2022