Portraits of Jewish Musicians, Looted by Nazis, in TA Exhibition


Can you hear the music? Once given up for lost, David Friedmann's vivid portraits of pre-WW2 Jewish musicians arrive at Tel Aviv exhibition. 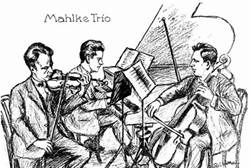 David Friedmann (1893-1980) was a renowned painter and graphic artist - a "press artist" - who loved music, especially the violin. Long before the Holocaust, Friedmann  portrayed musicians who were outstanding soloists, conductors and members of the Berlin Philharmonic Orchestra during the 1920's. The pictures include portraits of Jewish artists who later fled Nazi Germany, such as Arnold Schoenberg, Szymon Goldberg, Gregor Piatigorsky, and James Simon who performed in Theresienstadt and perished in Auschwitz.

As the Nazis advanced and his options narrowed, Friedmann continued to produce art illustrating the events and personal experiences of his time.

In December 1938, he fled from Berlin to Prague, escaping with only his artistic talent as a means to survive. In October 1941, he was deported to the Lodz Ghetto, then to camps Auschwitz-Birkenau and Gleiwitz I. He managed to survive by painting portraits of members of the SS and their families and survived a Death March to Camp Blechhammer in Upper Silesia, where he was liberated on January 25, 1945 by the Red Army. His wife and daughter perished.

In 1949, he fled Stalinist Czechoslovakia to Israel, remarried and had a daughter, and later immigrated to the United States. Almost his complete oeuvre was looted by Nazi authorities in Berlin and Prague.

Growing up hearing about his work served to inspire his daughter Miriam Friedmann Morris's successful journey to find these works and rescue them and the persecuted artists from oblivion. She succeeded in finding 28 of them on the pages of the weekly Der Deutsche Rundfunk and a daily newspaper, published at the time her father painted them, and in having them reproduced.

This week, thanks to her tireless efforts, the opening exhibition of the late David Friedmann's once-lost musician portraits will take place at 6:00pm, on October 23, at the Felicja Blumental Music Center & Library in Tel Aviv, as part of the Goethe Institute-Tel Aviv, Berlin Dayz Festival.

This first time showing, taking place in Israel, is the fruit of the Goethe-Institut's cooperation with the Berlin Philharmonic Orchestra and the Felicja Blumental Music Center and Library, and will continue until December 16,2013.

David Friedmann's story can be heard in a video on a website dedicated to his memory.

As opposed to the lighthearted and cultured portrayals of musicians, Friedmann's post-Holocaust works were born of his burning desire to show the world the ruthless persecution, torment, and agony practiced by the Nazis, in the hope that such barbarism would never happen again. However, when he tried exhibiting them in post-WWII Israel, he found that at first they elicited little interest, as no one could bear to look at them.

Later, in the US, he wrote:

"They have to look at what persecution under the Nazi regime was, and it can happen again, for in America to be a Nazi, to be a Communist is not prohibited.

"Against an evil world I will work further to try to put my feelings down on canvas or paper against anti-Semitism, against race hatred of all people."

An exhibit of his portraits of the Prague Jewish Community is in Yad Vashem and his post-war portrayal of Holocaust suffering has been exhibited in NYU.

The opening exhibition of the late David Friedmann's once-lost musician portraits will take place this week, on October 23, at 6:00pm, at the Felicja Blumental Music Center & Library in Tel Aviv, as part of the Goethe Institut-Tel Aviv, Berlin Dayz Festival.