The Cleveland Museum of Art is the latest museum in the world to settle an ownership claim over a work of art allegedly confiscated by Nazi forces during World War II.

The museum said in written statements and interviews over the past week that it has paid an unspecified sum to the heirs of art collector Arthur Feldmann, enabling it to keep a rare and beautiful drawing by the 17th century German-born artist Johann Liss.

All parties agree that the 1622 drawing, which depicts a woman with bare breasts seated on a stone balcony with a fallen crown at her feet and a smoldering urn on a parapet overhead, once belonged to Feldmann. At issue according to the museum is whether the Nazis confiscated the drawing, which the museum bought in good faith in 1953 from London art dealer Herbert Bier.

Feldmann, according to the museum's statement, died in 1941, two years after he was arrested and tortured by the Nazis when they invaded the city of Brno in the present-day Czech Republic. Feldmann's wife, the statement said, was deported to the Theresienstadt concentration camp and later Auschwitz, where she too died. 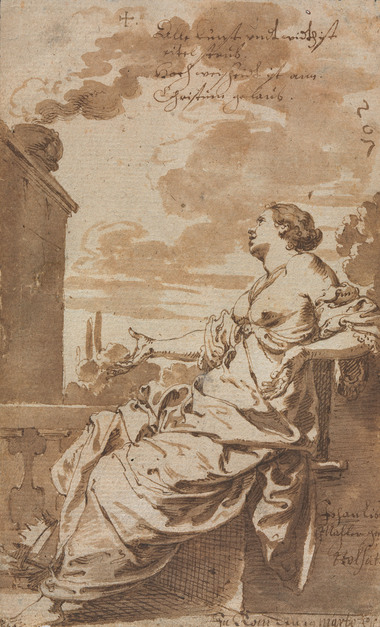 According to numerous reports, the Nazi Gestapo, or state secret police, confiscated Feldmann's collection of approximately 750 Old Master drawings. Hitler's aim was to build a museum of stolen masterpieces as a monument to the Third Reich.

Cleveland museum Director David Franklin said the institution agrees that the Liss drawing, entitled "Allegory of Christian Faith," once belonged to Feldmann, although he said "there was some vagueness as to whether the drawings were seized by the Nazis or not."

Yet he said, "we felt it was the honorable thing to meet the family halfway and give them the benefit of the doubt."

"We were willing to give them fair market value to keep the drawing in the collection," Franklin said, "and they were happy to have the drawing remain in a public collection and to honor the fact that we looked after it so well for so long."

The museum's statement quoted Uri Peled, Feldmann's grandson, as saying on behalf of the Feldmann heirs, "I would like to express our delight that this drawing [the Liss] is remaining in the collection of the Cleveland Museum of Art.

"We are sure that our grandfather would have wanted the drawing to be available to the public and for future research."

Peled, of Tel Aviv, Israel, did not respond by deadline to an email with questions about the agreement, his grandfather's collection and the family's efforts to reach settlements with other museums or have artworks returned to them.

It's unclear, for example, how long it took to reach the settlement in Cleveland, and neither side is talking about the payment. The agreement is confidential.

Heirs of Arthur Feldmann have pressed claims against other institutions in recent years, including the British Museum in London, and the Metropolitan Museum of Art in New York.

Franklin said the negotiations with the Cleveland museum took at least four years and predated his arrival as director of the museum in 2010. He characterized the discussions as "always amicable."

"As these stories are, it's really horrific and terrible -- the fate of these people -- and that was certainly on our minds as we dealt with this," he said. 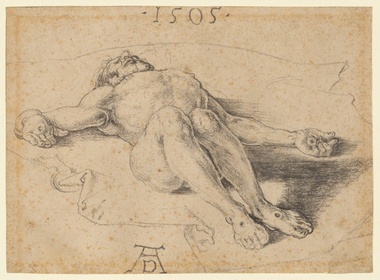 "The Dead Christ," by Albrecht Durer, one of three drawings by the artist looted by the Nazis from a library in the city of Lviv - then in Poland, now in Ukraine - at the outset of World War II. Poland pressed a claim to have the drawings returned in 2005, without effect.
Cleveland Museum of Art

Between 1933 and 1945, the Nazis rampaged through Germany and later France, Italy, the Netherlands and other countries, seizing art by force from museums, galleries and private collections, especially those of Jewish collectors.

After World War II, Allied forces tried to return thousands of objects to their rightful owners, but many works ended up in museums or private collections with ownership histories clouded by gaps during the Nazi era.

Empowered by new access to records from the war years, descendants of the Jewish collectors have come forward in recent years to press for restitution.

In other instances, artworks that were returned to their rightful owners after the war later ended up in museum collections fair and square.

The Cleveland museum owns at least five such works. One is the 1634 Frans Hals painting "Portrait of Tieleman Roosterman," which the Nazis confiscated from Baron Nathaniel von Rothschild. It was held by Austrian state museums from 1938 to 1999.

Austria returned the painting to members of the Rothschild family in 1999; they sold it to the Cleveland museum later that year at auction at Christie's in London for the record price of $12.8 million.

Four other paintings in the collection by Hals, Peter Paul Rubens, Jean-Auguste Dominique Ingres and Henri Matisse have similar histories.

In 2005, Poland pressured the Cleveland museum publicly over a trio of Albrecht Durer drawings confiscated by the Nazis from the Ossolinski Institute in Lviv, a city then part of Poland and now in Ukraine after a border change. The three drawings are presently illustrated on the museum's website, which says nothing about issues over their ownership history, or provenance.

Under the heading "Provenance Research," the museum's website lists 373 European paintings and 86 sculptures with gaps in their ownership histories between 1933 and 1945. Such gaps don't necessarily mean that the paintings were looted, the website says. The list does not include the Durer drawings.

As for the Liss, Franklin is thrilled the drawing will stay in Cleveland. Connoisseurs covet works by the artist, who lived from 1597 to 1630 or 1631, when he died from bubonic plague.

In addition to the drawing, the museum owns a 1630 painting of Cupid by Liss, which is on view in its Reid Gallery. The museum has no plans to exhibit the drawing any time soon, Franklin said. Like all works on paper, it is sensitive to light and is kept in storage for years at a time between brief periods of exposure.

Liss "is an artist whom specialists take great pride in studying," Franklin said, calling the "Allegory of Christian Faith" "a very sophisticated drawing to own."

It's also a drawing whose history is now tied very publicly to that of the Holocaust and of those who perished, including Dr. Feldmann of Brno.