In France, A Renewed Push To Return Art Looted By Nazis

April
NPR 8 May 2013
By Eleanor Beardsley

During World War II, the Nazis plundered tens of thousands of works of art from the private collections of European Jews, many living in France. About 75 percent of the artwork that came back to France from Germany at the end of the war has been returned to their rightful owners.

But there are still approximately 2,000 art objects that remain unclaimed. The French government has now begun one of its most extensive efforts ever to find the heirs and return the art.

French law states that at art pillaged during World War II must be publicly exhibited, if its condition permits, so that it can be recognized and claimed.

"Up until now, France put the maximum information at public disposal and waited for reaction. For people to come forward. Now we're proactively tracking down the descendants and families of those who had their art stolen," says Thierry Bajou, who is coordinating the French government's efforts. 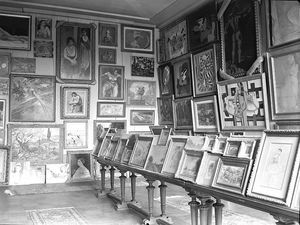 A photo taken by the Nazis during World War II shows a room filled with stolen art at the Jeu de Paume museum in Paris. Using improved technology and the Internet, the French government is making a renewed push to track down the rightful owners of art looted by the Nazis.

A team of government historians, regulators, archivists and curators is working full time, searching for missing art as well as heirs. Catalogs of art auctions before and after the war are being combed for possible looted art now on the market.

This is the latest effort in a process that dates back to the war itself. At that time, a French curator, Rose Valland, kept secret notes on everything the Nazis stole, and this helped return art to its owners after the war.

Any sale that took place during the war and Nazi occupation of France is null and void. That means all subsequent sales are invalid. Bajou says it gets complicated when a piece of art is located and the current owner, who is perhaps five or six times removed from and unaware of the original theft, believes he legally owns the piece.

Bajou brings up the . The Jeu de Paume museum in Paris was the clearinghouse for all the art the Nazis collected around Europe.

A photo taken by the Germans in 1942 shows a room crammed with paintings. Using special software technology, the full, frontal view of a painting can be seen, even if only a side sliver of the work is visible in the photo.

"You see, now you can even read the signature on this one," says Bajou. "It's signed 'Picasso.' "

Bajou says it was easy for big collectors to get back their works after the war; everything was well-documented.

"What's complicated is if you were just a normal guy and had maybe one valuable artwork that was in your family," says Bajou. "It's difficult to link the work of the person because most times during the war the families lost all their records and any photos or insurance claims — any proof that the art was theirs." The government's activism has already produced results. In a ceremony at the French Culture Ministry in March, six paintings were returned to 82-year-old Tom Selldorff of Boston.

Selldorff was just 6 when he saw his grandfather's prized art collection for the last time in Vienna in the 1930s.

"I only wish my grandfather were here to be able to be part of all this. But I'm sure he's watching from somewhere upstairs. So that's fine. Thank you very much," said Selldorff.

Selldorff's grandfather, Jewish industrialist Richard Neumann, fled to France in 1938. But he was soon forced to flee again, selling off his collection for a song. He made it to Cuba, alive but penniless. Records show his paintings were destined for a German version of the Louvre that Hitler planned in the Austrian town of Linz.

French Senator Corinne Bouchoux, a major force behind the new initiative, calls it France's moral duty for France to find the rightful owners of the art.

"This problem was sort of left in the freezer of history after 1950," she says. "It was the conjunction of two events that revived it: the fall of the Berlin Wall, which gave us access to the Soviet archives, and the Internet. Before the Internet, if you lived in Brazil and your family had missing works, you couldn't search the French collections of stolen art. Now you can."

But even with the Internet, it's still difficult, says Bajou.

He points to three paintings on the website by artist Fedor Lowenstein. They were considered "degenerate art," and Nazi records showed they had been destroyed. So no one ever looked for them, says Bajou.

He then saw them in the digitized Nazi photo of the looted paintings. Later he discovered the actual works in storage at the Pompidou Center. Now the French government is trying to return the paintings.