France to return art stolen by the Nazis

The French government has launched a new bid to return paintings stolen by the Nazis to their rightful owners - or, given the seven decades that has passed - their descendants. 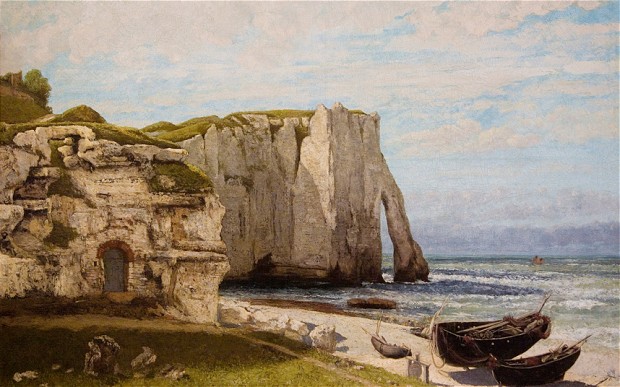 Etretat Cliffs after the Storm by Gustave Courbet, 1870, Musee D'Orsay

Depicting the Normandy coastline on a wet summer's day in 1869, the painting by French artist Gustave Courbet, Etretat Cliffs after the Storm, is popular with visitors to Paris' celebrated Musee d'Orsay.

Schoolchildren study it in science lessons on the "evolution of the landscape", and it has often served as a backdrop for photo opportunities during museum visits by French ministers.

It may not, however, be there much longer. Like hundreds of other artworks at major museums in France, the painting is thought to have been stolen from a Jewish owner by the Nazis during their wartime occupation of France.

And now, the French government has launched a new bid to return the paintings to their rightful owners - or, given the seven decades that has passed - their descendants.

President Francois Hollande's administration is setting up a group of experts and curators to pro-actively track down families, rather than simply waiting for them to come forward. The group, which will start work next month, will carry out its detective work with the help of a new computerised database compiled of digital scans of thousands of pages of relevant documentation currently gathering dust in archives.

"We have a moral obligation to show we have done our best to return these things to their rightful owners," said Corinne Bouchoux, a Green Party member of the French Senate and author of a recent French government report that described the thefts as a "systematic plundering" during a "historically painful time'.

"And we have to do this now before it is too late. We have to try to find the families whose belongings were stolen. We have to look for them, not wait for them to come to us."

French museums currently hold some 2,140 art pieces that are thought to have been looted from Jewish families, including paintings by famous names such as Cezanne, Degas, Van Dyck, Ingres, Pissarro, Rembrandt, Renoir, Rubens, and Tiepolo. Although most are not of enormous value by the standards of the modern art market, the likes of Gauguin's Nature morte a la Mandoline would fetch around £350,000 at auction, while Etretat Cliffs after the Storm would fetch around £170,000.

The collection also includes sculptures, furniture, jewellery, and Greek and Egyptian antiquities, including a 2nd century marble statue of the Dionysos, son of the Greek god Zeus, and a 3rd century Greek sarcophagus.

"We believe that most of the major works that we will seek to return belong to families from Central and Eastern Europe, like Poland, the former Czechoslovakia, Austria or Hungary," said Bruno Saunier, who heads the art collections at the National Museums' Agency, in an interview earlier this month.

German troops seized around 100,000 of works of art and valuable objects from Jewish private collections across Europe between 1933 and 1945. At the end of the war much of this art, some of it hidden in mines and secret storage centres across Germany, was retrieved and returned to national governments by the Allies.

Gen. Dwight D. Eisenhower, centre, inspects paintings in a salt mine at Merkers where the Nazi government stored art treasures and gold (AP)

The story of how that was done will be told by Hollywood later this year in The Monuments Men, directed by and starring George Clooney and also featuring Daniel Craig and Cate Blanchett, which tells how a team of art experts were tasked with stealing back art looted by Hitler before it was destroyed.

France received 65,000 artefacts back from Germany, nearly three quarters of which were returned to families who had reported them stolen. Of those that remained unclaimed, some 2,140 of the best pieces were sent to French museums, while the rest were sold by the state.

Today, those pieces are scattered across some 57 museums nationwide. The Musee d'Orsay has 71 paintings and pastels, the Pompidou Centre has 38 works, and the Louvre 678.

The French culture ministry has made efforts in the past to track down owners, but the process has been hampered by an absence of documentation and a lack of political will to be pro-active on the matter. Since 1951, just 103 works of art have been restored to their owners, prompting criticism that the French government has dragged its feet on what should have been a priority.

Muriel de Bastier, an art historian, said researching the provenance of looted items was a painstaking process, hindered by "fading memories" but helped by new technology such as internet.

"Restitutions are rare, but extremely moving," she said. "The process involves a lot of detective work and following leads. The stories are always different and delicate," she said.

Mrs De Bastier said one of the most intriguing looted objects was a bronze death mask of Napoleon Bonaparte, from 1833, and currently held in storage at the Louvre.

"We have no idea whether it was taken from a collector during the war, or from a museum or even sold legitimately. In fact we known nothing about it," she said.

Senator Bouchoux said French museums should draw up a clear inventory of works on display and in storage and digitise their archives, so as to make it easier for potential claimants to identify lost works.

She has also called for a "proactive" approach, saying that other countries, including Britain, America, Germany and Austria, had shown greater initiative in tracking down owners of stolen works than France.

"We have paintings and nobody claiming them and we have people claiming paintings we don't appear to have. There has to be an effort made to clear up this mystery," she said. "If we don't do it now, then it will soon be too late and what will we tell our children and grandchildren when they ask what we did to right these wrongs."

Due for release in December, The Monuments Men will dramatise the work of the 400 serviceman and civilians attached to the Allies' Monuments, Fine Arts, and Archives program, established in 1943 to retrieve artworks looted by the Nazis. Sometimes working with frontline units, they would seek out secret Nazi art repositories in what was later dubbed "the greatest treasure hunt in history".

Among their most spectacular discoveries were 1,000 paintings and sculptures stolen by Herman Göring and found at Berchtesgaden, Germany, and some 6,500 paintings hidden in Austria's Altaussee salt mines, which included Michelangelo's Madonna of Bruges.