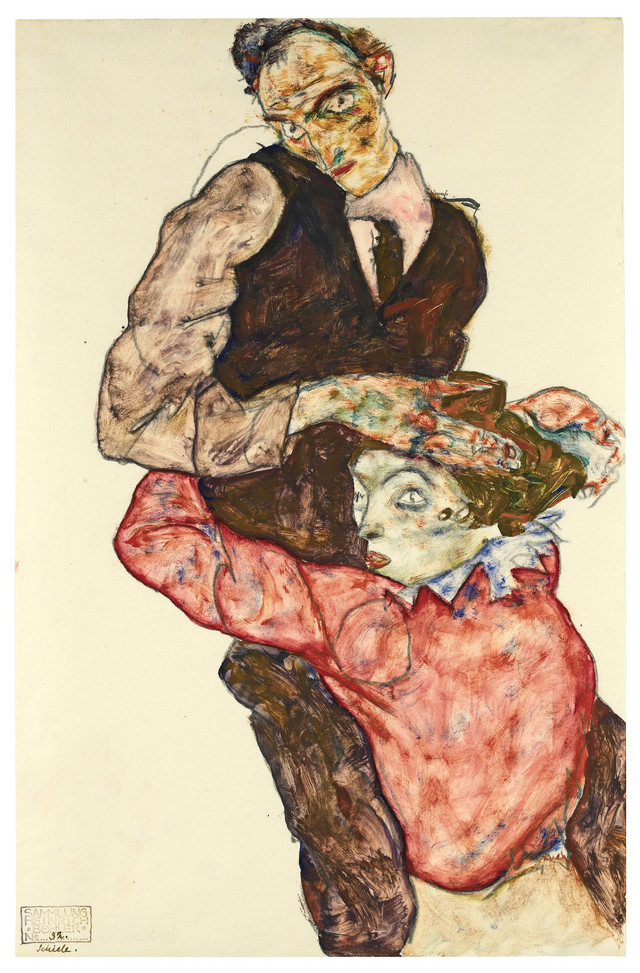 "Liebespaar (Selbstdarstellung mit Wally)" (Lovers - Self-portrait with Wally), a 1914/15 gouache, watercolour and pencil on paper work by Egon Schiele. It is being offered by the Leopold Museum, Vienna, at a Sotheby's auction of Impressionist and modern art in London on Feb. 5. Source: Sotheby's via Bloomberg.

Three drawings by Egon Schiele are estimated to sell for a total of as much as 12 million pounds ($17.6 million) at an auction in London in February.

The works on paper by the short-lived Austrian Expressionist are being offered by the Leopold Museum, Vienna, in Sotheby’s sale of Impressionist and modern art on Feb. 5, 2013, the New York-based auction house said today in an e-mail sent to Bloomberg.

The drawings are being sold by the museum, founded in 1994 by the late Viennese ophthalmologist and collector Rudolf Leopold, to pay for the settlement of the restitution claim over its 1914 Schiele painting “Houses by the Sea.” The privately- owned foundation has about 220 works by the artist.

“The Leopold Museum is fortunate to hold the world’s greatest collection of works by Schiele. The sale of these three works will fund a settlement which will be of benefit to the museum,” Peter Weinhaeupl, the institution’s Managing Director, said in the statement.

“Houses by the Sea” was previously owned by the Austrian collector Jenny Steiner, a Jewish silk-factory owner. She fled Austria in 1938, shortly after the Nazis marched into Vienna, and later emigrated to the U.S. with her two daughters.

The painting was seized and sold by the Nazis, then later auctioned. Rudolf Leopold acquired it in 1955. Last year, the Leopold Museum agreed to pay $5 million to the granddaughter of Jenny Steiner, who claimed a third of the work, to keep the Schiele painting.

Further settlements were agreed in June for the remaining two-thirds claimed by U.S. institutions which inherited from Steiner’s other heirs.

A 1914/15 pencil, gouache and watercolor study of Schiele and his lover Walburga (Wally) Neuzil in an embrace, “Liebespaar (Selbstdarstellung mit Wally)” (Lovers (Self- portrait with Wally)), is the most highly valued of the offered drawings, estimated at 6.5 million pounds to 8.5 million pounds.

All are guaranteed to sell courtesy of third-party “irrevocable” bids, Sotheby’s said. The auction record for a Schiele work on paper is the $11.35 million paid for the 1917 study, “Selbstbildnis mit kariertem Hemd” (Self Portrait With Checkered Shirt) at Sotheby’s, New York, in 2007.

This is the second offering of high-value Schiele works at Sotheby’s on behalf of the Leopold Museum.

In June 2011, the auction house sold the 1914 canvas “Houses With Laundry (Suburb II)” for a record 24.7 million pounds ($40 million) in London to pay for the settlement of the long-running “Wally” restitution case.

In 1998, Schiele’s 1912 painting of his auburn-haired model and lover was seized by a district attorney after being loaned to an exhibition at the Museum of Modern Art, New York.

Descendants of the Jewish art dealer Lea Bondi Jaray claimed that “Wally,” acquired by Leopold in 1954, was stolen by the Nazis in the 1930s. The claim was upheld by a federal court in Manhattan in 2009, prompting the Viennese museum to make an out-of-court settlement of $19 million in 2010 to keep the painting.

The museum also had to pay as much as 3.5 million euros ($5.2 million) in legal costs, Weinhaeupl said. The complex case was followed by 44 countries drafting guidelines for the return of looted art known as the Washington Principles.

During Rudolf Leopold’s lifetime -- he died in June 2010 at the age of 85 -- the museum argued that as a private foundation, it was not subject to Austria’s restitution law, which only applies to federal government museums.

After Leopold’s death, his son Diethard Leopold pledged to settle all outstanding claims for Nazi-looted art in the museum’s collection as quickly as possible.