A 500-year-old sculpture looted by the Nazis for Adolf Hitler’s planned “Fuehrermuseum” in the Austrian city of Linz was today returned to heirs of the original owner by Dresden’s state art collections. 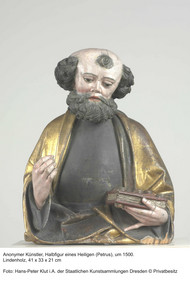 A wooden statue of St. Peter dating from about 1500 was returned to the heir of the original owner. The sculpture was seized by the Nazis for Hitler's planned "Fuehrermuseum" in Linz. Source: Staatliche Kunstsammlungen Dresden via Bloomberg.

The wooden sculpture of St. Peter was one of about 560 artworks seized from Jewish collectors for Hitler’s museum. The Germany-based family to whom the sculpture has been restituted does not wish to be identified by name and plans to keep the artwork, according to Gilbert Luepfer, the head of provenance research for Dresden’s public art collections.

“The sculpture is late Gothic and may have come from an altar, probably from the Rhineland or somewhere in southwestern Germany,” Luepfer said by telephone from Dresden. It has been on display in Meissen and Chemnitz, he said.

A fan of German and Austrian 19th-century painting and himself a failed artist, Hitler planned to build the Fuehrermuseum in Linz after World War II.

He assigned Hans Posse, then director of the Dresden Gemaeldegalerie, the task of collecting paintings, sculptures, furniture, porcelain and tapestries. Posse and his successor amassed more than 4,700 objects.

The museum was never built, and some of the works stayed in Dresden after the war: Others were stored in the “Fuehrerbau” in Munich.

Dresden established a provenance research unit in 2008 to research the history of objects in its collection that arrived after 1933. As well as restitutions to the heirs of Jewish collectors persecuted by the Nazis, the city has returned art and artifacts, including porcelain, to the heirs of aristocratic families dispossessed under communism in 1945 and 1946.

To contact the editor responsible for this story: Manuela Hoelterhoff at mhoelterhoff@bloomberg.net.