Jewish Texts Lost in War Are Surfacing in New York

Lotte Strauss’s husband, Herbert, owned one of the books in the collection on the Science of Judaism.

In 1932, as the Nazis rose to power in Germany, a Jewish librarian in Frankfurt published a catalog of 15,000 books he had painstakingly collected for decades. 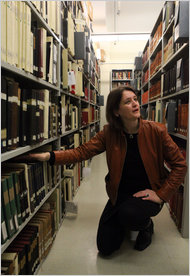 Renate Evers, head librarian of the Leo Baeck Institute, where titles were found.

Some of the titles missing from the University Library Frankfurt that were discovered at the Leo Baeck Institute.

The German identification card of Herbert A. Strauss, who had a Science of Judaism book in his collection.

A mid-20th-century map of central Europe that was found among papers in New York.

It listed the key texts of a groundbreaking field called the Science of Judaism, in which scholars analyzed the religion’s philosophy and culture as they would study those of ancient Greece or Rome. The school of thought became the foundation for modern Jewish studies around the world.

In the tumult of war, great chunks of the collection vanished. Now, librarians an ocean away have determined that most of the missing titles have been sitting for years on the crowded shelves of the Leo Baeck Institute, a Manhattan center dedicated to preserving German Jewish culture.

The story of how the hundreds of tattered, cloth-bound books with esoteric German titles ended up in New York includes impossible escapes, careful scholarship and some very heavy suitcases. And while the exact trails of many of the volumes remain murky, they wind through book-lined apartments on the Upper West Side, across a 97-year-old woman’s cluttered coffee table and into a library’s cavernous stacks.

For Jewish scholars, the collection of Science of Judaism texts (in German, Wissenschaft des Judentums) is a touchstone marking the emergence of Jewish tradition as a philosophy and culture worthy of academic study.

“We’re all heirs to the legacy of Wissenschaft,” said Jonathan D. Sarna, a professor of American Jewish history at Brandeis University.

The University Library Frankfurt still houses the bulk of the collection, but experts there have determined over several decades that they were missing some 2,000 books listed in the 1932 catalog. In the last two years, a team led by Renate Evers, head librarian at the Leo Baeck Institute, found that her shelves had more than 1,000 of the lost titles.

While scholars say the books in New York are probably not the same copies as those lost from the Frankfurt library, their rediscovery offers the chance to rebuild what one professor called “a legendary collection.” Frankfurt librarians are putting the collection online, while the Center for Jewish History, the institute’s parent organization, is seeking a grant to do the same.

“This is very exciting,” said Rachel Heuberger, head of the library’s Judaica division. “You can reconstruct a collection that otherwise never would have come to life again.”

Scholars say the books were most likely brought to New York from Europe by private collectors and antiquities dealers. In the past 50 years, donors, nearly all of them German Jews who immigrated and prospered here, gave them to the Leo Baeck Institute.

The donors, photographed in their cinched ties and sober suits, represent a generation of scholarly New York immigrants that is nearly gone. They escaped the Nazis, built new lives and created a sophisticated community that centered on books, culture and learning. Their ranks included the political philosopher Hannah Arendt and Dr. Ruth Westheimer.

Many came to this country hauling suitcases filled with books, and as they settled here, they created academic journals and scholarly institutes. They debated politics during formal dinners in Washington Heights parlors. They took typewriters along on vacation so they could keep working.

Herbert A. Strauss, who came to New York with his wife in 1946, owned one of the lost books, an 1843 volume by Ludwig Philippson. Where he got it, his widow, Lotte, has no idea. A historian and a professor, he was always coming home to their Upper Manhattan apartment with his arms full of new tomes.

“He was not only married to me,” Mrs. Strauss said. “He was also married to his desk.”

The couple had met in Germany, and escaped together to Switzerland just steps ahead of the Gestapo. They recounted their ordeals in separate memoirs published in 1999.

Mrs. Strauss, 97, a great-grandmother, recalled meeting her husband. “I was fascinated by him,” she said. “He was good-looking and he had new ideas.”

On a recent afternoon in her sun-drenched apartment, Mrs. Strauss pulled out her husband’s brittle papers. There were Nazi-era ration cards decorated with swastikas — red for bread, blue for meat. There was a lifeguard certificate from Berlin that showed a young man, sleeves rolled up past his elbows, smiling at something off-camera.

Did he carry books with him when he came to New York?

Mrs. Strauss laughed. “We came here poor as church mice,” she said. “You went as you were; you didn’t carry a thing.” She was eight months pregnant and had one dress to her name. Mr. Strauss built his library, and their life, in New York.

Ludwig Schwarzschild, a dermatologist, brought his library with him when he came to the United States in 1934. Although his practice north of Frankfurt was shuttered by the authorities, he, his wife and their two young children were able to take most of their possessions out of Germany, said their daughter, Lore Singerman, of Annapolis, Md.

Her father owned one of the lost Wissenschaft volumes, an 1888 edition of a Hermann Cohen book. His family donated it to the institute in 1970, the year he died. Mrs. Singerman does not know where her father got the book, but said, “If it was in German, he probably brought it with him — he didn’t buy German books here.”

Fred W. Lessing, another German Jewish donor, built such a vast book collection at his home in Scarsdale, N.Y., that he ordered catalog cards from the Library of Congress to keep track of it all. He was chief executive of a Yonkers metal company, but his passion was his library and discussions with professors and writers.

Mr. Lessing scoured auction catalogs for treasures, with a special focus on the history of the Enlightenment. His children knew enough not to touch his “good books,” said his daughter Joan Lessing. “His library was part of our lives,” she said. “Books were in every room.”

Mr. Lessing gave the institute an early-20th-century edition of a volume by Adolf Eckstein, but his daughter did not know where he had gotten it.

Even the Frankfurt librarian who cataloged the entire collection, Aron Freimann, came to New York. After arriving in 1939, he went on to work at the New York Public Library.

Today, his granddaughter, Ruth Dresner, lives in the Riverdale section of the Bronx. She keeps her grandfather’s catalog on her shelf — she calls it his “magnum opus” — and plans to leave it to her children.

“I’m 80 years old, and I’m very devoted and dedicated to perpetuating tradition,” she said. “I am very proud.”