Israel's national museum has returned a painting to the estate of its creator, decades after it was looted from a Jewish museum in Nazi Germany.

The Return of Tobias (1934), by Max Liebermann, is now in Berlin, where the artist's heirs reside.

Meanwhile, a separate painting has been impounded in the US, amid claims it was stolen from a Jewish family during World War II.

The baroque artwork, by Girolamo Romano, had been on loan from Italy.

Christ Carrying the Cross Dragged by a Rogue was one of 50 works lent by the Pinacoteca di Brera museum in Milan to the Mary Brogan Museum in Tallahassee, Florida.

The US Attorney's office has instructed the gallery to retain of the painting until ownership issues have been resolved by US and Italian investigators. 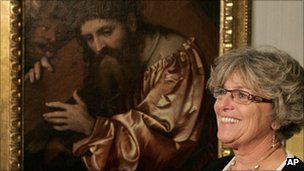 "My initial reaction was that this was an important opportunity for the Brogan museum to do the right thing and help the government determine the rightful ownership," said the museum's chief executive officer Chucha Barber.

The 16th century painting was purchased at an auction in Paris in 1914 by Gentili di Giuseppe. Following Di Giuseppe's death, the painting is believed to have been sold off by the French Vichy government in 1941 to pay off debts.

But members of Di Giuseppe's Jewish family, who fled the country because of the Nazi occupation, have said the sale was illegal.

Max Liebermann, who died in 1935 at the age of 88, was a prolific German painter who led the Berlin Secession.

James Snyder from the Israel Museum said Liebermann loaned his painting to the Jewish Museum in Berlin in the 1930s.

The work, along with many others, disappeared from the museum during World War II. Following the war, with authorities unable to discover to whom the painting belonged, it was given to the Israel Museum (then the Bezalel National Museum).

Recent research, however, revealed the rightful heirs were Liebermann's own family and it will now remain in Germany.

"The fact that Max Liebermann was a prominent German artist of his time and living in Berlin, coupled with the new research that enabled us to discover that this work belonged to him, adds particular poignancy to our being able to restore it to his heirs now," Mr Snyder said.

The Nazis stole an estimated 650,000 religious items and works of art from European Jews during World War II.

While much of the art been returned, a great deal remains in museums and private collections.