JERUSALEM -- Israel's national museum said Thursday that it has returned a painting to the estate of its creator, decades after the masterpiece was looted from a Jewish museum in Nazi Germany.

The Israel Museum said "The Return of Tobias," a 1934 painting by German Jewish artist Max Liebermann, is now in Berlin after it was determined the work belongs to Liebermann's heirs.

Liebermann, who died in 1935 at the age of 88, was a prolific painter who led the avant garde artistic society known as the Berlin Secession. He also served as president of the Prussian Academy of Arts during the 1920s and early 1930s. Some of his works have been valued at more than $1 million. 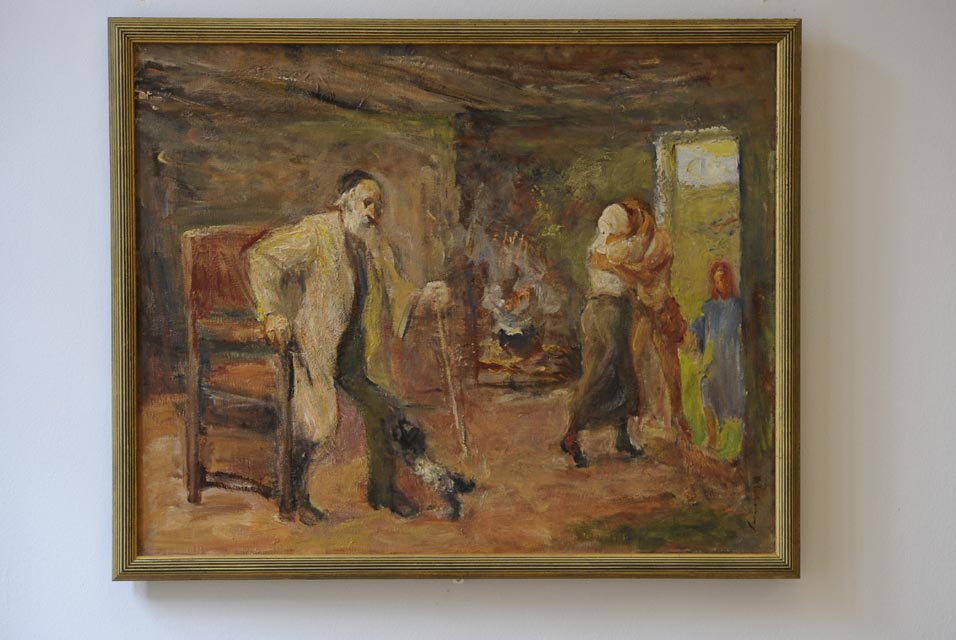 The painting "Die Heimkehr des Tobias" ( The Return of Tobias) by German-Jewish painter Max Liebermann (1847-1935) is photographed at the Centrum Judaicum in Berlin. Israel's national museum has returned an impressionistic painting to the estate of its creator, the German-Jewish Max Liebermann. The work was looted from the Jewish Museum in Berlin, where it was on loan from the artist, in the 1930 where it was on loan from the artist.Following the end of World War II, the American-based Jewish Restitution Successor Organization (JRSO) collected orphaned art and distributed the pieces to Jewish institutions worldwide. Liebermann's painting was one of more than 1,000 works the JRSO delivered in 1955 to the Bezalel National Museum, the precursor to the Israel Museum. AP Photo/dapd/ Michael Gottschalk.

The Israel Museum's director, James Snyder, said Liebermann loaned his painting to the Jewish Museum in Berlin in the 1930s. The work, along with many others, disappeared from the museum during World War II. German Nazis stole countless art treasures from museums across Europe.

After the war, the American-initiated Jewish Restitution Successor Organization searched for stashes of stolen art and distributed those pieces with no known heirs to Jewish institutions worldwide.

Liebermann's painting was one of more than 1,000 such works delivered to Jerusalem's Bezalel National Museum, the precursor to the Israel Museum, in the 1950s.

Over the last year, art historians began delving into the background of the painting while preparing for an exhibit on looted art in the Berlin Centrum Judaicum, Snyder said. Liebermann's work was one of 12 pieces the Israel Museum agreed to send to Germany for the exhibit.

The research determined the piece was originally a loan from the artist - and therefore should be returned to his heirs. While "The Return of Tobias" was originally due to stay in Berlin for the three-month exhibition beginning this month, the piece will remain in Germany with his family.

"The fact that Max Liebermann was a prominent German artist of his time and living in Berlin, coupled with the new research that enabled us to discover that this work belonged to him, adds particular poignancy to our being able to restore it to his heirs now," Snyder said.

"The Return of Tobias" is the third of Liebermann's works to be returned to the family, according to the Israel Museum. The painting shows a scene from the Book of Tobit, part of the Catholic and Orthodox Bible and included in the Apocrypha of the Old Testament, in which Tobit's son returns home with a cure for his aging father's blindness.

Israeli art appraiser Shimon Leumi of the Shorashim art gallery in Tel Aviv estimated its worth at $150,000 to $200,000. Leumi said Liebermann's pieces fetch anywhere from $100,000 to $1 million or higher, with a rising value in Germany.

Liebermann and his wife Martha were avid art collectors, amassing thousands of paintings and drawings, with an emphasis on French impressionists. But the collection was scattered in the 1930s and 1940s, sold or expropriated, said Dr. Martin Fass, director of a museum devoted to Liebermann and housed in the artist's former villa in Berlin.

Worldwide, experts say, between 250,000 and 600,000 pieces of art looted by the Nazis were never claimed and remain in the possession of museums, governments and private collectors.

Over the years, the Israel Museum has returned about 30 pieces to owners or heirs, spokeswoman Dena Scher said.