Ignorance Is Defense in a Case of Lost Art

PARIS — Guy Wildenstein, the billionaire international art dealer, is accustomed to shuttling between his company’s limestone headquarters on the Upper East Side of Manhattan and the Wildenstein Institute, his family’s research center in a regal mansion on the Right Bank here. But last week he spent 36 hours in police custody, sleeping two nights in the headquarters of a special art-theft squad outside Paris, where he was formally charged with concealing art that had been reported missing or stolen. 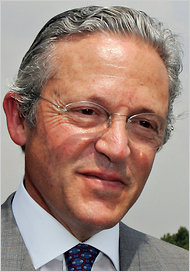 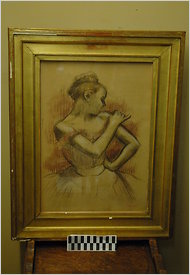 A Degas drawing was among the seized works that had been reported missing or stolen.

Suzanne Reinach, 98, owns at least 20 of the works and wants to know how they ended up in the vault.

The crime, known officially as a “breach of trust,” carries a maximum penalty of seven years in prison.

In the course of his questioning Mr. Wildenstein made a surprising claim: He told the police that the institute, which specializes in gathering detailed information about art for scholars, lacked any inventory for a roomy vault where dozens of valuable artworks that it does not own were discovered this year by the police.

“I didn’t inspect the vault,” Mr. Wildenstein said, according to internal court records of his questioning by an investigative judge while in custody. “We have never had an inventory of the vault.”

That terse statement is the emerging defense for Mr. Wildenstein, the scion of an old French family that has traded in art since the 1870s, who presides over an international art-dealing empire and who was released without bail after his questioning.

According to court documents Mr. Wildenstein blamed the lack of records on family conflicts after his father’s death, in 2001, and staffing reductions at the Wildenstein Institute. In addition, he said, one missing painting found in the vault, a Berthe Morisot depiction of a thatched house valued at more than $1.1 million, was obscured by wrapping.

This general line of defense has put Mr. Wildenstein on a collision course with skeptical heirs and owners of the 30 seized artworks, including an elderly Parisian with alert pale blue eyes who inherited most of the works.

For this woman, Suzanne Reinach, 98, who is partly deaf and struggles to speak after a stroke, the enduring mystery is how at least 20 of her artworks — among them sculptures by the 20th-century Italian artist Rembrandt Bugatti and a Eugène Delacroix tiger pastel — ended up in the Wildenstein vault.

“I don’t know how many missing works of art there are,” Mrs. Reinach said in a halting voice. “I have never spoken to Guy Wildenstein.” She added emphatically in an old French expression, “He certainly has gall.”

Mrs. Reinach’s great-nephew Alexandre Bronstein was dismissive of the idea that the institute lacked an inventory, calling it absurd. “Of course they have a record somewhere,” he said.

The missing works, which also included drawings by Degas, were seized in a raid that grew out of the Wildenstein family’s longstanding clash over the division of the multimillion-dollar estate of Mr. Wildenstein’s father, Daniel.

His widow, Sylvia, who died last November, had pursued a lawsuit for a larger share of the fortune, estimated in the billions, alleging money laundering and tax evasion. That prompted the police to search the Wildenstein Institute vault, which contained about 300 works.

Guy Wildenstein’s claim of ignorance about the contents of the vault raised uncomfortable questions, given that most art galleries keep careful records of works in their possession for tax and insurance requirements, updating them regularly as art is sold or lent to institutions.

According to the court transcripts an investigating judge, André Dando, pressed Mr. Wildenstein last week about why a second vault did have an inventory record.

“The second vault,” Mr. Wildenstein said, “had extremely frequent entries and departures of works for transfer.”

Mr. Wildenstein took charge of the institute in 2008 after the death of his brother, Alec. It publishes catalogues raisonnés for artists, including Monet, Manet and Gauguin.

Within the first vault — the one Mr. Wildenstein said lacked an inventory record — were works inherited by Mrs. Reinach as part of the enormous art collection of her aunt and adoptive mother, a member of a wealthy and prominent French family.

Daniel Wildenstein was retained by the executor of the aunt’s estate in 1972 to divide the art, which was stored in the Wildenstein Institute, among three branches of heirs. Yet years later some relatives began to suspect that not everything had been properly distributed.

In September 2007 a niece of Mrs. Reinach’s, Martine Beck, wrote a letter to Guy Wildenstein requesting a list of the works in the family collection, and she was told that no records were found. Both Mr. Wildenstein and his lawyer, Hervé Temime, said that Mrs. Reinach’s family had been given information about its artworks. But in an interview Mrs. Reinach insisted that she was certain that she never received her own inventory of her inheritance from her aunt’s estate.

During Mr. Wildenstein’s interrogation Judge Dando asked why “after 38 years the artworks were found in the vault of the institute instead of in possession of the heirs.”

Mr. Wildenstein said, “The heirs had not asked for return of the artworks, otherwise I would have returned them.”

The judge countered, “Isn’t it a normal reflex to reply that you don’t have a list, but you do have artworks in your vault?”

Mr. Wildenstein replied: “I didn’t have that reflex. When I responded to her letter, I was in New York, but maybe if I had been in Paris I would have done it.”

It is that logic that particularly irks Mrs. Reinach’s family.

Mr. Bronstein said, “How can you demand the return of art when you don’t know” what is missing? He is conducting a far-ranging search for family art that vanished during the German occupation. (During the war, Mrs. Reinach was a member of the French resistance; her husband died at Auschwitz.) Mr. Wildenstein’s lawyers have strenuously denied that any of the items seized by the police was Nazi loot.

Today the walls of Mrs. Reinach’s apartment are hung with a few Modern paintings. Her family never lost its passion for art even after German forces looted works from the family’s villa in St.-Germain-en-Laye, west of Paris, in 1941 and set the building on fire. It is a collection that shaped her life in unalterable ways.

“I can’t say having it is a curse,” she said, staring out her window at a dark green canopy of trees. “But it’s not a blessing either.”