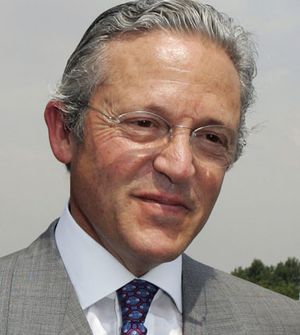 Guy Wildenstein, whose strong room had 30 valuable paintings and sculptures stashed inside

The billionaire Franco-American art dealer, Guy Wildenstein, has been formally accused of fraud after 30 valuable paintings and sculptures that had been missing for decades were discovered in the strong room of his family's institute in Paris.

Mr Wildenstein, 65, a leading financial backer and friend of President Nicolas Sarkozy, blamed the presence of the works, including several allegedly looted by the Nazis, on "an oversight" by his late father. He has been placed under formal investigation by a French magistrate on a possible charge of "receiving fraudulently obtained goods".

The case is part of a cat's cradle of interconnected lawsuits, on both sides of the Atlantic, which threatens one of the wealthiest and most powerful art-dealing families in the world. Mr Wildenstein is the son of Daniel Wildenstein, who made his reputation and fortune, from cataloguing and selling the works of French impressionists, including Claude Monet and Édouard Manet.

The missing works were first discovered during a police raid in Paris at the end of last year. The investigators were looking for priceless artworks belonging to Daniel Wildenstein, which his second wife, Sylvia, believed to have been hidden away by her two stepsons after his death in 2001.

They included Cottage en Normandie, by the impressionist artist Berthe Morisot, whose whereabouts had been in dispute since the 1990s. They also included sketches and sculptures by another impressionist, Edgar Degas, which were believed to have been looted by the Nazis from a mansion near Paris in 1941.

The Morisot painting, valued at €800,000 (£718,000), belonged to Anne-Marie Rouart, a descendant of Édouard Manet. She was a friend of Daniel Wildenstein who often stored artworks on her behalf. When she died in 1993, her family complained that some works were missing.

After the Morisot painting turned up with other missing works in the underground strong-room at the Institut Wildenstein in Paris in January, Guy Wildenstein wrote in the magazine Le Point in February that their presence must have been the result of an "oversight or error" by his father.

Wildenstein and Company, founded in Paris in 1875, is one of the world's most powerful art dealerships with offices in New York, London and Tokyo as well as the non-profit making Institut Wildenstein in the French capital.

Guy Wildenstein is a leading fund-raiser for President Sarkozy's centre-right party, the Union pour un Mouvement Populaire (UMP). The Wildenstein family has been beset by a series of scandals and law-suits in recent years.

The first wife of Guy Wildenstein's brother, Alec – Jocelyn Wildenstein – came to be known as the "Bride of Wildenstein" after spending an estimated £4m on hundreds of cosmetic operations which left her badly disfigured.