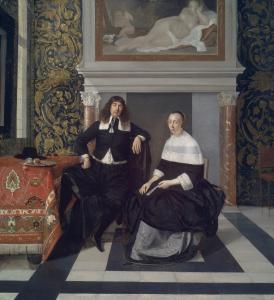 The MFA’s investigation of its works with little ownership history led to a payment for this 17th-century oil portrait. (Museum of Fine Arts)

The Museum of Fine Arts has agreed to pay restitution to the heir of a Jewish art dealer killed at Auschwitz after determining that a 17th-century Dutch painting in its collection was once owned by him and was probably plundered by the Nazis.

With the deal, which culminates a more than decade-long investigation by the museum, the MFA remains at the leading edge of an emerging museum practice to proactively research works with little ownership history and make amends if they are found to have been acquired under questionable circumstances. Since 2004, the MFA has returned three other works seized during World War II.

In this case, the MFA agreed to pay an undisclosed sum and, in exchange, the heir of Walter Westfeld agreed to allow the museum to keep the oil portrait of a man and woman by Eglon van der Neer.

“They should be commended for both acknowledging there might be some questions in this work and seeking information about them, and then pursuing the questions until they were resolved,’’ said James Cuno, the director of the Art Institute of Chicago who will become president of the J. Paul Getty Trust in Los Angeles in August.

In 2000, the MFA took the then-unusual step of posting an image of the van der Neer painting online, along with six other works, to highlight its own questions about its path to Boston. Fred Westfield, Walter’s nephew and a Tennessee resident, contacted the museum in 2004 after learning of the piece’s existence via a Google search. He’s been talking ever since with the MFA’s curator for provenance, Victoria S. Reed.

“We feel very good and very thankful for how the museum dealt with us,’’ said Westfield, 84, a retired economics professor. “We had a lot of help from some of the people at the museum over the years, once we started to claim that the painting really did belong to us.’’

MFA officials said they were pleased to be retaining the painting by the Dutch artist, who died in 1703. The 29-by-27-inch work, which depicts a wealthy couple sitting in their living room, was purchased from a New York dealer in 1941 for $7,500. In recent years, similar van der Neers have sold at auction for as much $550,000. The MFA’s work is on view in the Robert and Ruth Remis Gallery.

“We have an amicable situation where the claimant and the museum would really like to see the painting stay in the museum’s collection,’’ said Katherine Getchell, the MFA’s deputy director. “It’s a great way to resolve an outstanding issue.’’

George Shackelford, chairman of the MFA’s art of Europe department, said the painting is an important work in the museum’s collection.

“It’s just like you want to have a Rembrandt portrait, if you can. It’s important to have if you want to represent the full span of 17th-century Dutch paintings,’’ Shackelford said. “It’s the kind of painting that Dutch artists really reveled in, because it is both a portrait of people . . . and a portrait of their lifestyles.’’

The mystery of the van der Neer began in 1941 when the MFA’s paintings curator, W.G. Constable, purchased the painting from the E. and A. Silberman Galleries in New York. At the time, the dealer said the work was “brought to this country by a refugee some time ago, and I wish I were able to supply you with more information,’’ according to museum records.

In 1943, Robert Lebel, a French dealer, appeared at the MFA. He told Constable that he had sold the portrait to Westfeld, and soon afterward, the Nazis arrested the Jewish dealer and eventually sold off his work.

In 2003, Reed arrived at the MFA as a research fellow and began to examine pieces about which the museum sought more information. Eventually promoted to become the museum’s curator for provenance, Reed would travel to Germany, comb through records in New York and Boston, and speak with Fred Westfield before coming to her conclusion: There was no way to track the direct path of the painting from Germany in the 1930s to New York. But it was very unlikely that Westfeld had sold his painting voluntarily.

Reed learned that Westfeld had run a gallery in Elberfeld (now Wuppertal), Germany, until the Nazis shut it down in 1936. He continued to operate secretly as a dealer, but in 1938 he was arrested, and he was sent to Auschwitz in 1943.

Westfeld’s oldest brother, Dietrich, had escaped Germany with his wife and young son, Fred. They added an “i’’ to the family name and settled in Nashville. In 1943, Lebel told Dietrich Westfield that he had seen the painting at the MFA.

It wasn’t until six decades later that Fred, sitting at his computer, picked up the trail.

“One evening, I typed the name Walter Westfeld into Google, and I was led to a story in The Boston Globe that reported that the Museum of Fine Arts was looking into the history of some of these paintings,’’ said Westfield. “I saw that story and then contacted the museum. We started the conversation.’’

Museums across the country, including the MFA, have long been criticized for acquiring works without knowing enough about where they came from. These range from antiquities potentially looted from ancient archeological sites to works stolen by the Nazis, funneled through art dealers, and purchased during and after World War II.

But in recent years, museums have embarked on efforts, through online databases and their own researchers, to clear up some of these mysteries. In the MFA’s case, that has included making Reed the first full-time curator of provenance in the United States.

During her tenure, the MFA has returned three works plundered during World War II as well as objects taken illegally from Italy. The museum also fought to keep an Oskar Kokoschka painting after concluding that it had a legal right to the work. A court confirmed that finding in 2009.

While the MFA continues to research pieces in its collection about whose provenance it has questions, it is satisfied with the van der Neer outcome.

“These things take time to resolve,’’ said Getchell. “Research like this takes place across continents and in many languages. It wasn’t until recently that we really felt we had done all we could.’’