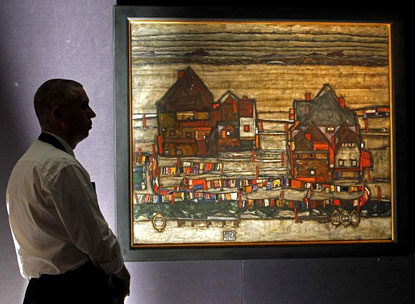 Masterpiece: Schiele's Houses With Washing Lines at Sotheby's in London

Sotheby's set a £24.68 million record for artist Egon Schiele to close a 10-year scandal over a painting stolen by the Nazis during the Second World War.

Houses With Washing Lines, 1914, one of Schiele's masterpieces, was sent to auction in London by the Leopold museum in Vienna.

It was sold to raise funds for the family of Lea Jaray, a Jewish art dealer in the Austrian capital who fled the Nazis to live in London, leaving her pictures behind. In a US court judgment of 1998 she was declared to be the rightful owner of another Schiele painting in the Leopold collection, Portrait Of Wally, which was impounded in New York when it arrived for an exhibition at the Museum of Modern Art.

A decade of legal battles has followed the court's decision that Dr Rudolf Leopold, founder of the museum, must pay compensation of $19 million (£12 million) to the Jaray heirs before the Portrait Of Wally is released.

At Sotheby's last night the sale of Houses With Washing Lines doubled the previous record for the artist.

But another London dealer said: "Nothing has been proved about him. It was a different culture in Europe after the war. Leopold did a lot for Austrian art." Dr Leopold, who died last year, amassed one of the world's finest collections of Austrian artists - Schiele, Gustav Klimt and Oskar Kokoschka. His 44 Schieles are the largest group in any world museum. In 1994 he sold his collection to Austria for about a third of its market value - then estimated to have risen to near £450 million.

Dr Leopold always maintained that his family had opposed Hitler during the war and that he had bought pictures "in good faith". The value of the Leopold collection of 5,500 works is now put at close to £555 million. Sotheby's £96 million auction of Impressionist and Modern pictures was a near sellout and included a £4.07 million artist record for Tamara de Lempicka as well as high prices for Giacometti and Picasso.