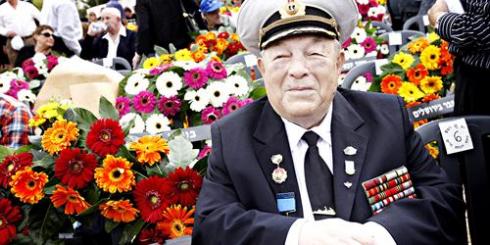 A survivor at a Yad Vashem ceremony marking Yom Hashoah

A new online database will make it easier to find out what happened to the thousands of artworks pillaged by the Nazis after Hitler's rise to power in 1933.

It is one of several initiatives in aid of Holocaust research that were announced this week in the wake of Yom Hashoah on Sunday.

The catalogue of Nazi-looted art will be set up after an agreement signed in Washington by a number of institutions from across the world, including the UK National Archives and the Commission for Looted Art in Europe.

Anne Webber, co-chair of the commission, said: "The project will help researchers and families in identifying, documenting and recovering looted cultural property.

"For the first time, when searching for the many missing objects, it will be possible to trace their fate online through these records which provide the names of victims, perpetrators, artists and works of art."

The United States Holocaust Memorial Museum in Washington also released details of its World Memory Project, intended to be the largest online resource on the victims of Nazi racial policies.

Sara Bloomfield, the museum's director, said its archives "contain documentation that may be the only remaining link to an individual life. Preserving these personal histories and making them available online is one of the most powerful ways we can learn from history and honour the victims".

A first batch of 30,000 documents has been indexed and will shortly be available on the web free of charge.

A third initiative is the Joint Distribution Committee's plan to put online its records and photographs relating to its work with Holocaust survivors.

The American aid organisation, which was active in Europe during and after the Second World War, will establish a database of 500,000 names and 1,500 photos on its "Shared Legacy" website.

JDC chief executive Steven Schwager said: "For six decades, the vast majority of this data has been available only to professional researchers. Now, thanks to technology, survivors and their descendants can directly engage with our shared history."