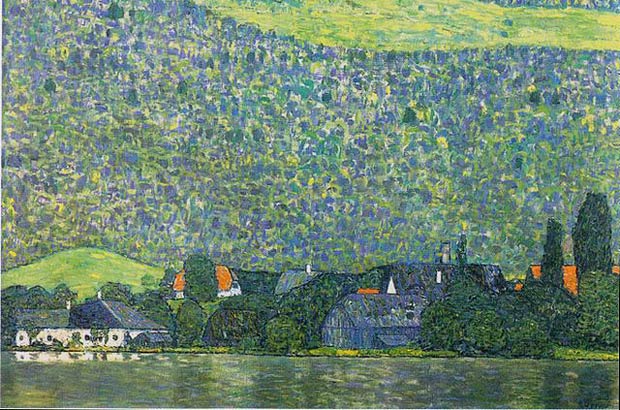 An Austrian museum announced Thursday it will return Gustav Klimt painting "Litzlberg am Attersee" ("Litzlberg on the Attersee") stolen by the Nazis and worth over $29 million to the Canadian descendant of the previous Jewish owner.

MONTREAL — A prized Gustav Klimt painting stolen from a Montrealer's grandmother during the Second World War will be removed from an Austrian museum before officials decide if it should be returned to its rightful owner.

The Austrian government and museum officials announced Thursday that Litzlberg am Attersee was the rightful property of Amalie Redlich, and her only heir, Georges Jorisch, 83, should benefit from a portion of the eventual sale of this painting, estimated at least $27 million.

Art experts tracing the provenance of the painting have now determined without a shadow of a doubt that it was part of a collection belonging to Redlich that was looted by the Nazis.

Viktor Zuckerhandl was a wealthy Austrian Jew who liked to buy art. When he and his wife died childless, his collection went to his sister, Amalie.

Redlich and her daughter, Mathilde, were deported to Lodz, Poland, in 1941 and presumed executed.

Mathilde's husband and son, Georges, had fled Vienna in 1938. When they returned after the war, all of Redlich's paintings were gone.

The painting was purchased by an art collector in Salzburg; it was later traded to the Salzburg state gallery, and in 1952 joined the inventory of the Salzburg Modern Art Museum.

Government officials will decide in July whether to follow a recommendation that the art be returned to its rightful owner.

Reached at his suburban Montreal home, Jorisch declined to speak about the matter, other than to say it had been a long ordeal, and referred all calls to his lawyer Alfred Noll in Vienna.

This is the second time Jorisch and his legal team have successfully reclaimed a Klimt.

In 2010, the Church of Cassone-Landscape with Cypresses was sold at Sotheby's for $45.4 million. That painting was also part of his grandmother's looted collection.

The painting turned up in 1962, loaned out for an exhibit celebrating the 100th anniversary of Klimt's birth,

Jorisch split an undisclosed portion of the proceeds of the auction with the collector who owned the painting at the time.

Under a 1998 restitution law, Austria has returned 10,000 Nazi-stolen paintings to the descendants of their former owners.

The estate of Montrealer Max Stern, owner of the Dominion Gallery, has also been successful in recovering stolen art. Stern owned a gallery in Dusseldorf and fled from encroaching anti-Semitism in 1937.

Paintings left on consignment to an agent in Cologne were seized by the Nazis between 1939 and 1941.

After Stern died in 1987 and his gallery inventory was dispersed, art work from the former gallery in Dusseldorf was found circulating in the same market.

An art restitution project in Stern's name was started to recover the stolen pieces.

To date eight pieces have been brought to Montreal and are on loan to the Montreal Museum of Fine Arts.