On Tuesday, "Reclaimed: Paintings From the Jacques Goudstikker Collection" ends its run at San Francisco's Contemporary Jewish Museum. The exhibition consists of artworks recovered from the inventory of Amsterdam dealer Jacques Goudstikker many years after their theft by the Nazis during World War II.

German native Clemens Toussaint, now based in New York, has made himself famous in the art world by his adeptness and determination in tracking down stolen art and restoring it to its rightful owners. He has played a leading role in reconstituting the plundered Goudstikker legacy. I met him - as always, on the hunt for stolen goods - at the preview of the European Fine Art Fair, where about 260 dealers in paintings, works on paper, classical and Asian antiquities and decorative arts bring their finest offerings before collectors. 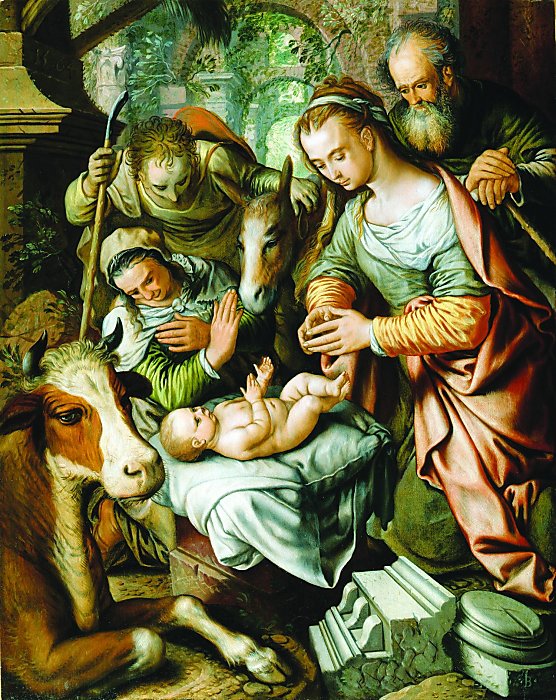 "The Adoration of the Shepherds" (1564) by Joachim Beuckelaer is part of the exhibition "Reclaimed: Paintings From the Collection of Jacques Goudstikker."

In 2006, Toussaint found at the fair a picture currently on view in "Reclaimed" - "The Adoration of the Shepherds" by Joachim Beuckelaer - part of Goudstikker's raided inventory, now restored to his heirs, the von Saher family of Connecticut.

Toussaint and I discussed the picture as an example of how he works.

Q: Why are you here at the art fair?

A: I go to this event every year because this is where most of the European dealers do at least half of their yearly turnover. Of everything that is available on the old-master market at the moment, 90 percent of it is here ...

Q: How do you proceed?

A: Of course, one of my qualifications is to have a visual memory of endless images, which I also have on my hard disk. So if something looks familiar to me from the bank of looted artworks that we have identified, I look at my computer or call my office and we cross-check. In the case of the Beuckelaer picture, I walked into the booth of a New York dealer and immediately saw that this was a painting we were looking for. ... So I compared the measurements and the provenance, and they corresponded to the information we had. I immediately told the dealer that we might have a problem. And he said, "There's no way there's a problem because we have a vetting committee, and they said it's OK." I said the vetting committee knows a lot about aesthetics and authenticity, but they can't know everything about the history of a picture, but I know something about its history.

He said, "But there are many versions of this picture," and he was right. So we stood there with the painting and my laptop, and he pointed out how the painting differed here and there and there. And I said, "Just do me a favor and don't sell the picture for 24 hours." ... So then we met the next day and compared a photograph I had of the painting with the picture itself ... and there were parts of the painting that looked different. But then I asked him whether the painting had been restored recently. And he said, "Oh yes, I stripped it entirely and it's been entirely restored." So I said suppose the restorer was not clear on certain details of the picture and made some changes. He agreed this was possible, and we left it at that.

Luckily we found a high-quality photograph of the picture from the '20s. We had it scanned at the highest possible resolution and we asked the dealer to make a high-resolution scan of the painting. Then we put the scans next to each other and we discovered that the cracks were identical. So, even though part of the architecture, and a particular tree and the position of one figure's hand were different, the pattern of cracks, which is like a fingerprint, was the same.

Then the dealer had to acknowledge that even though it had been heavily restored, this was indeed the Goudstikker picture. He said that he had just bought it in good faith at auction a few months before. So we met again in New York and we sat down with the auction house and worked out a solution that he could feel good about.

Q: Did you see anything today that aroused your suspicions?

A: Yes, I spent the last four hours looking around, and I'm quite exhausted. My memory scanner is overworked, but I did see three or four things that aroused my suspicion.

A: It depends on the client. I have worked for governments, they just pay me by the hour: I've worked for institutions that pay me a flat fee, and I work for private clients who pay me on different models. But on long-term projects of locating, identifying and restituting stolen works of art, people prefer to pay me according to a proportion of the results. This gives me the freedom to do things the way I think they should be done. ... I prefer to do things my way, of course fully in cooperation with the client.