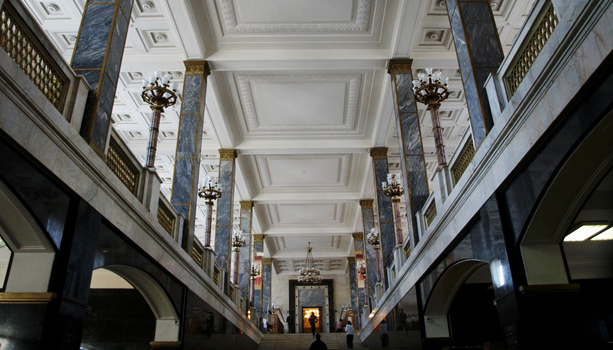 MOSCOW—A dispute over an obscure trove of religious documents has spun into a row over cultural diplomacy, as Russia's culture minister Alexander Avdeyev announced today that the country was continuing a ban on all exhibitions traveling to the United States, a move taken in reaction to a U.S. court's ruling regarding a disputed Hasidic Jewish archive.

The collection of 12,000 books and 50,000 other documents was assembled by Rabbi Joseph Isaac Schneersohn and has been held in Russia since World War II — but the Brooklyn-based Chabad-Lubavitch Hasidic movement has claimed ownership, and a U.S. court ruled in its favor in August. Avdeyev has justified the ban of sending exhibitions to the U.S. by saying that any artworks to travel to the United States could be seized in order to force Moscow to return the cache.

The dispute has been brewing for some time. Speaking to the Moscow Echo radio station, Avdeyev said that the exhibition restriction imposed in August — and somehow little noticed then — remains in place because "one American organization made a completely illegitimate claim on this collection of books," the Straits Times reports. Avdeyev added that Russia would not return the collection "which has never left Russian territory… because we have our own believers who respect these books no less" than the Chabad-Lubavitch organization in the U.S.

The archive has a turbulent past. According to Interfax, part of the archive was seized from Rabbi Schneersohn during the Russian Revolution. However, Schneersohn took another part of the collection with him when he moved to Poland but then left it there, fleeing the Nazi regime and coming to the U.S. It was subsequently taken by the Soviet army back to Moscow, where it is known as the Schneersohn Library and kept as a part of the Russian State Library.

Russia objects to the claims of the Chabad-Lubavitch organization being settled in a U.S. court, which it claims has no jurisdiction over the matter. Russian authorities have asserted that the collection belongs to the state because Schneersohn had no heir at the time that he left the country. However, the Rabbi had three daughters, and his son-in-law Rabbi Menachem Mendel Schneerson became the leader of the Lubavitcher movement following his death. Menachem Schneerson died in 1994 and is revered by some Lubavitchers as the messiah.

It's unclear how the ban has affected museum programming in the U.S. The Guggenheim's 2005 "Russia!" was a major international event, "realized under the patronage" of then-president Vladimir Putin.