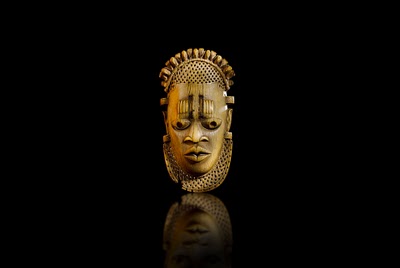 A colleague brought to my attention Sotheby’s impending sale of yet another piece of Benin cultural patrimony. I read the announcement of the sale and was struck by its brazenness. Sotheby's is trafficking in stolen goods and it is doing so without any concern for the fact of its brazen criminality. It is clear that the Benin artworks are a contested collection of cultural artifacts. The history of their plunder from Benin is not in doubt, and the Benin Kingdom has never at any time given up its claim to these artworks. There has been significant amount of words written about the history of the British plunder of Benin and why the artworks should be repatriated. How is it then that despite the constant requests for the repatriation of these artworks and their clear identification as stolen goods, they continue to be sold by firms such as Sotheby’s without any hesitation?

The Benin art corpus is known by everyone to have been stolen from Benin in 1897, and ironically, their history of being plundered is the main prop used to affirm their authenticity in all the sales of these artworks for over 100 years. The legal issue here is quite simple: is it ever possible to have legal ownership of a stolen good? In other words, if an artwork or piece of property is clearly identified as a stolen item, can anyone other than the known owner of that stolen item ever have a valid legal claim to it? Western institutions that hold African cultural patrimony seem to believe they can legally own stolen goods and so far haven't shown any willingness to examine their shameful actions in this regard.

The Sotheby's announcement makes a point of stating that the mask and five other Benin objects will be sold by descendants of Sir Henry Gallway, who participated in the looting of Benin city in 1897. All the Benin objects identified in the proposed sale are clearly identified as belonging to Benin kings who did not cede their title to the artworks to anyone (the coerced abdication of the Benin throne enforced by the invading British would be illegal in any court today: in 1991, the USA went to war to prevent Iraq from annexing Kuwait based on such principles). There is also no doubt that all Benin artworks in any museum of institution in the world belongs to His Highness, Oba Erediauwa, great grandson of Oba Ovonramwen and the reigning kind of Benin. Despite all this facts, the descendants of a known British thief and vandal who stole the Idia mask from Benin stand to make between 3.5 and 4.5 million British pounds on the sale of an artwork commissioned and paid for by a Benin king (Esigie), which was a representation of his mother (Iyoba Idia) was used as part of the royal regalia of an existing kingdom, while it is clear no single penny will accrue to the Benin king or his descendants from the sale of this item of cultural heritage.

The Benin kingdom and other wellwishers have mounted various legal challenges to the ownership and sales of Benin artworks by various Western institutions. So far, all these challenges have been dismissed without being given a proper hearing. I have reviewed some of these challenges and the possibility of bringing a new legal challenge through American courts and found that it is quite impossible to challenge these matters in court. The legal process here is very expensive and the barriers to getting your day in court are often too high to bear. Moreover, Africans are forced to prove their claims in courts constituted primarily to legally dispossess them of claims to their lives, bodies and natural resources. In the meantime, Western institutions continue to profit from African life and labor. Think about it: millions of Africans were sold into slavery and African land and natural resources were plundered to finance the Western ascendancy of the past five hundred years. Today, African resources continue to support Western development while the continent remains the poorest on the planet. The plunder of cultural resources deprives Africans of their history and of the economic value and equity of their cultural patrimony: all these flow into the coffers of Western institutions without bringing a single economic benefit to the African contexts of their production.

Leaving aside the ongoing looting of the continent and continued use of its inhabitants as guinea pigs by various Western corporations, I think the greatest error that has been made in scholarly studies of African artworks and cultural patrimony is the pervasive idea that African artworks are products of nebulous “community action”. Artworks from Africa are always stripped of their links to particular individuals and economic contexts by their identification as the product of a group ethos. The Benin people did not create the artworks in question here: the pectoral masks of Iyoba Idia were created by specific Benin kings as part of the state’s political and economic obligations. It was stolen from the bedroom of Oba Ovonramwen in 1897. For over six hundred years, Benin kings spent huge portions of the national wealth supporting the creation of lavish artworks and sustaining the specialized guilds that made these artworks. You can still see descendants of the guilds in Benin. African artworks were commissioned by various individuals and institutions, paid for in very real economic terms, and then incorporated into the cultural equity of the individuals and institutions that commissioned them. These artworks are not random creations: they were part of complex systems of knowledge management and economic exchange. Their plunder left their owners significantly poorer. It is tragic that the descendants of the thieves who stole these artworks from Africa should so brazenly benefit from their plunder when the descendants of the Africans who created the artworks receive no share at all in their economic value.

Some commentators have suggested that Africans should try to buy back their stolen artworks when these come to public auction. I consider such suggestions preposterous since it allows the vandals who plundered Africa to benefit from their plunder twice over. When Britain and other colonial powers pay restitution to Africa for the rape of the continent,then I will entertain such suggestions. In the absence of any real compensation for centuries of plunder and genocide against Africans, raising this issue at all is clearly a racist form of responsibility avoidance.

All across the world today, many stolen artworks are being repatriated to their countries of origins. No one is asking the cultural owners of these artworks to pay for the privilege of retrieving their ancestors' properties. Therefore, the relevant issue is whether Africans have any legal rights to their lives, natural and cultural resources. At what point does the brazen dispossession of Africa become a significant political, economic and moral issue? The Sotheby's sale is part of a broad disregard for the very real impact of dispossession on the reality and fortunes of black Africans today. There is no justice here and it does not appear that black Africans or their descendants will be afforded any kind of legal justice in the prevailing context of white Western power. And yes, this is clearly a racial issue. Zahi Hawass has by and large stopped Western institutions from brazenly trafficking in Egyptian artifacts. He continues to negotiate the return of large numbers of looted Egyptian artworks back to Egypt. Most of these artworks were removed from Egypt more than 250 years ago. Italy has repatriated artworks to Libya. Western museums have repatriated artworks to South Africa. But so far, all requests for repatriation or reparation by black Africans have been dismissed without hearing. This is not surprising: African Americans have so far only received an apology for their centuries –long enslavement and, through their overwhelming imprisonment, they continue to fatten the coffers of modern-day slaveholders who run various prisons in the USA. There has never been any Western country held accountable for their actions in Africa, not even Belgium that oversaw the genocide of close to 10 million Congolese between 1880 and 1920. Sotheby's multi-million dollar sale of stolen Benin artwork would seem insignificant within such a list of atrocities against Africa but make no mistake, it is part of the same current of morally and ethically dubious actions unfolding without any regard at all for African concerns.

It is therefore time for all Africans who have the resources to contribute to a massive effort to bring the global legal system to bear on these institutions who traffic in stolen African cultural patrimony. There are already precedents: the Holocaust reparation legal challenge is a clear precedence; so is the Native American Graves Repatriation and Protection Act. The issue of African cultural patrimony is an urgent human rights issue. Africans deserve equal access to and equal share of the economic value of artworks created by their ancestors. More importantly, they deserve to have a say in what happens to these artworks in the contemporary era. These artworks arrived in the West on a boat of plunder and bloodshed. Uncountable numbers of African lives were destroyed in the avaricious pursuit of colonization by Western powers. There needs to be an accounting for this history. Western institutions like Sotheby’s that broker the sale of these artworks should also cease and desist. They may not be legally liable for their actions today, but they will be legally liable at some time in the future.