Federal authorities have seized two Julian Falat paintings stolen by the Nazis during World War II from New York auction houses, with the hope of returning the national treasures to the Polish government.

The U.S. Attorney's Office announced today that it had filed a civil forfeiture complaint on Wednesday to seize the two paintings -- "Off to the Hunt" and "The Hunt" -- which were stolen by the Nazis from the National Museum in Warsaw. U.S. authorities said the U.S. District Court in Manhattan had authorized the seizure of the paintings pending the outcome of the case. 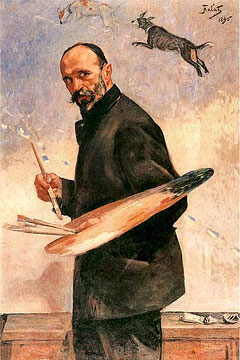 "Self-Portrait From Palette" by Julian Falat was painted circa 1896.

In August 1944, the German SS Obersturmbannfuhrer Benno Von Arent took over the Polish National Museum and confiscated its most valuable items, including "The Hunt" and "Off to the Hunt," officials said.

The U.S. Attorney's Office said that in 2006 the Polish government learned that the two paintings were being offered for sale by two New York auction houses. The Polish government contacted the U.S. government for help in recovering them. The Immigration and Customs Enforcement of Homeland Security Investigations in New York conducted an investigation, resulting in this week's legal action and the seizure of the paintings on Wednesday.

Falat was born in 1853 in Tuliglowy, Poland, and died in 1929. He is well known for his hunting and landscape paintings. Authorities said "Off to the Hunt" was first publicly displayed at the Society for the Encouragement of Fine Arts in Warsaw in November 1901 and was later sold to someone who eventually returned the painting to the society as gift in 1904.

U.S. authorities said "Off to the Hunt" was transferred in December 1939 from the society to the the National Museum in Warsaw, which the Nazis used to store Polish national treasures. Some time during the war, the Nazis removed the painting from the frame, and it was missing for decades.

Louis Webre, senior vice president for the auction house Doyle New York, told AOL News that "The Hunt" was given to the auction house on consignment, but declined to provide more details. He confirmed that federal authorities had taken the painting.

Christie's auction house, which had the other painting, said it would issue a statement via e-mail if it had anything to say.