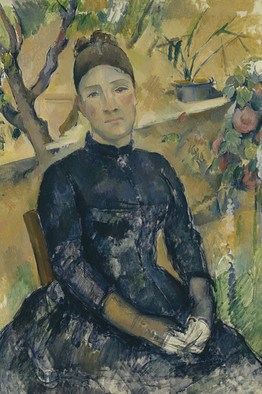 Paul Cézanne's "Madame Cézanne in the Conservatory," 1891
NEW YORK— A lawsuit filed by French engineer Pierre Konowaloff in a Manhattan federal court on Tuesday alleges that he is the rightful owner of an 1891 Cézanne painting included in the permanent collection of the Metropolitan Museum of Art. The plaintiff claims that the work, titled "Madame Cézanne in the Conservatory," was stolen from his great-grandfather, Ivan Morozov, a wealthy Russian textile merchant whose art collection was looted by Lenin's Bolshevik army in 1918 — his home seized and converted into a state museum displaying the artworks that had been stolen from him.

According to the Wall Street Journal, Konowaloff is demanding the restitution of the work along with "monetary damages in connection with wrongful acquisition, possession, display and retention of the Painting," the provenance of which he asserts was not fully investigated when the museum accepted the work. The Cézanne painting, which depicts the artist's stony-faced wife, was bequeathed to the museum in 1960 by collector Stephen Clark, a former trustee of the Met, as well as a trustee of the MoMA and an heir to the Singer sewing machine fortune. The plaintiff has argued that Clark knew of the work's stormy provenance when he acquired it in 1933.

Konowaloff says in his complaint that "Madame Cézanne" traveled through Berlin's Mattheisen Gallery, which he calls the "main transit point for Soviet shipments of art for sale to the west," a stepping stone that gave the wrongful sales of works seized during the Russian Revolution the "appearance of legitimacy." From there, the painting wended its way to the P. & D. Gallery in London and then to New York's Knoedler & Company, from which it was purchased by Clark.

The Metropolitan museum has issued a statement defending its ownership of the work. "The Museum firmly believes it has good title to the painting and that this lawsuit is totally without merit," the statement says. "The Museum intends to defend this lawsuit vigorously."

Allan Gerson, the plaintiff's attorney, has had the work independently appraised at $50-70 million (although some experts have valued it at as much as $100 million). Gerson claims that his client — who, upon his father's death in 2002 became sole heir to Morozov's collection — first learned about the painting's presence at the Met four years ago. His attempts to alert the New York museum to the situation, however, received no reply.

"This goes to the heart of how these highly respected institutions acquire what they have and what responsibilities they have in getting them," Gerson told the New York Post. Konowaloff, meanwhile, is entangled in a similar suit against Yale University, filed in 2009. He alleges that the school should return Vincent van Gogh's "The Night Café," another work from his great-grandfather's looted collection, but Yale is vigorously denying his claim. The van Gogh work in question was donated to Yale by Stephen Clark, the same collector who bequeathed the Cézanne painting to the Met.

"Several wealthy American collectors, including Andrew Mellon, Secretary of the Treasury under Herbert Hoover, acquired Bolshevik looted art on the black market," Konowaloff says in the complaint he filed this week. Of MoMA founding director Alfred Barr, the plaintiff argues "he knew that at least part of the collection in this museum had belonged to Morozov."